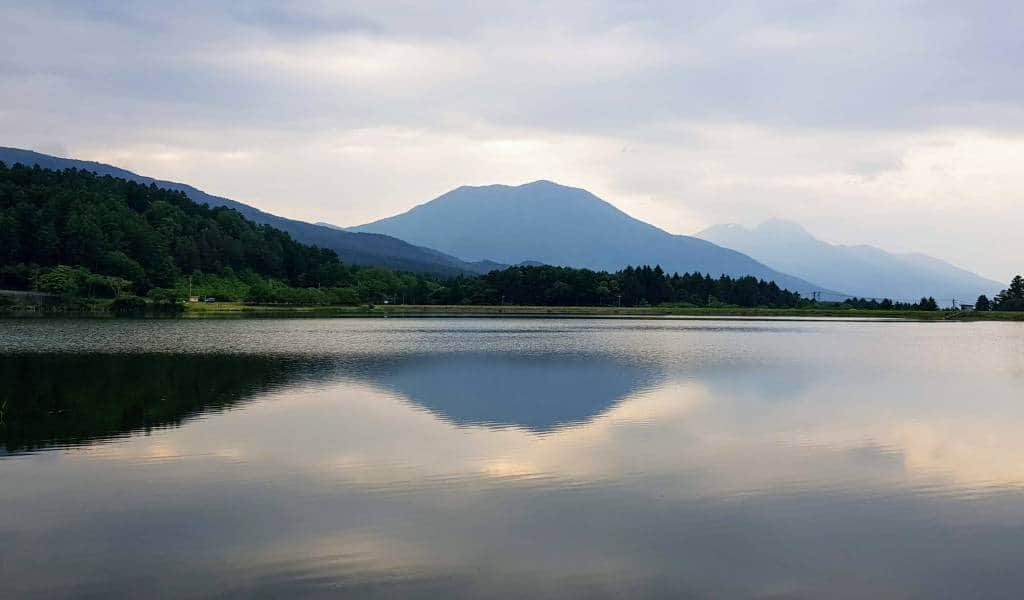 Created in 2015 and spanning Nagano and Niigata prefectures, Myōkō-Togakushi Renzan National Park is one of Japan’s newest national parks. It also features some of Japan’s newest geological features. “Renzan” means a chain of mountains—mostly volcanoes in this case. Many of the volcanoes in the national park are active, with the time since their formation ranging from 3,000 years ago to 300,000 years ago, which is basically yesterday in geological terms.

The main connection most visitors will have with the area is as a destination for winter fun. The mountains of the national park host more than 10 different ski resorts, all of which receive prodigious amounts of snow. However, in any season, the national park provides spectacular scenery, wild(ish) rivers, unspoiled lakes, hiking, and excellent camping—all within a 4-hour drive or a 3-hour rail journey from Tokyo.

Due to its position near the Sea of Japan and the moist prevailing wind from the west, the eastern side of the range gets an enormous amount of snow. Most years see about 17 meters of snowfall on the eastern slopes. Despite the enormous dumps of snow, the area isn’t as cold as you might think. Temperatures often rise above zero, so the base of snow is maintained by the sheer volume that deposits itself in the area. Renowned ski resorts in the area include:

Most of the mountains in the national park are huge; each rises straight from the valley floor to heights of 2,000 meters or more. Mount Myoko,, however, is the most prominent, with its jagged peaks rising to 2,454 meters (over 8,000 feet). If the Myōkō-Togakushi Renzan National Park has a signature, it’s the silhouette of this imposing volcano.

The Naena Falls are officially one of “Japan’s top 100 waterfalls”, but don’t let that put you off! Arcane Japanese government rankings aside, the falls are a sight worth seeing—especially as they’re so easy to get to. The scene changes depending on the season with the biggest flows in spring and early summer. 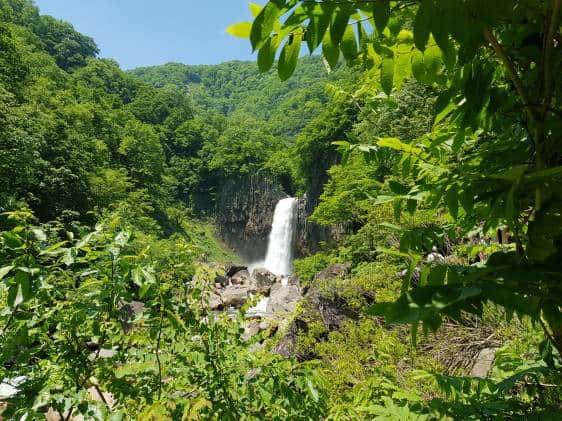 Lake Nojiri is an exclave of the national park, but they couldn’t not include it! If you are high up on most of the ski fields in the area, you will look down to the valley to see a slightly ragged kidney-shaped lake. This lake is well worth a close-up examination, especially in the green season when it’s a great swimming and water sports spot. It’s also a popular fishing spot all year round, and it rarely freezes over in winter. 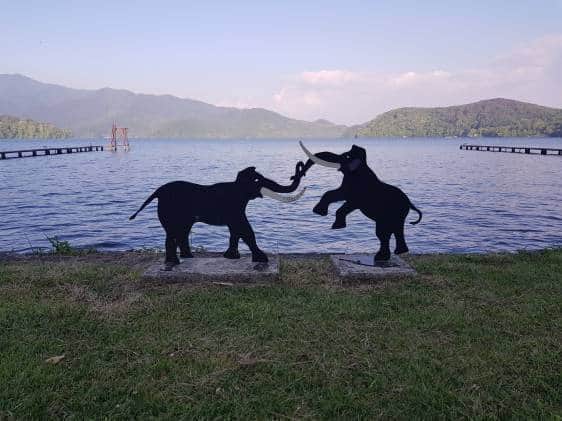 With the vigorous volcanic activity beneath the Myōkō-Togakushi Renzan National Park, it’s little surprise that there is an onsen around almost every corner. Each of the onsen has different characteristics. The water may be clear, muddy red or milky white, depending on the mineral composition.

Public baths in the area include:

The best known hiking trail through the national park is the Mount Hiuchi Trail. The hike from Kyukamura on the Sasagamine plateau to the peak of Mount Hiuchi (the tallest peak in the range) can be done in a day, or accommodation can be booked at the mountain huts on the trail if you want to take it a bit easier. Aside from the views, one of the highlights is the view of Koyaike Pond in autumn.

Black bears are active in the mountains during the warmer months, so it’s a good idea to take some bells and perhaps some bear spray with you.

At the base of Mount Togakushi, the shrine is made up of five different shrines split into three zones: the lower, middle, and upper shrine areas.

The path leading to the upper shrine is flanked by more than 300 towering cryptomeria trees. Some are believed to be up to 900 years old.

The shrine too has ancient origins. Legend has it that the shrine dates from 250 BCE.

If visiting in winter, the paths may be closed. If they’re open and there’s snow on the ground, you’re strongly advised to have snow shoes with you. You can hire them from the hut at the beginning of the path to the upper shrine.

If you have a car, you can park next to the entrance to the upper shrine. Otherwise, you can catch a bus from Nagano Station (tickets available near the bus stop) although the bus only takes you as far as the middle shrine, so you’ll have a bit more walking to do to get to the upper shrine.

If you’re visiting during winter, there is a wide range of accommodation available, such as traditional onsen type accommodation, ski lodges, private apartments, and Airbnbs.

Getting there and getting around

By train and public transport

From Myokokogen Station, you can catch a Kogen Taxi to many of the resorts and attractions in the area. There are also regularly scheduled municipal buses and other services that run between the resorts. These run much more frequently in winter, but the municipal services still run year round. Unfortunately, the timetables are only available in Japanese. You can get a two-day adult bus pass for the municipal buses for ¥1,000. If you are having trouble figuring the bus routes and timetables out, there is a tourist information center right next to Myokokogen Station.

Going by car gives you the most flexibility in investigating the far-flung attractions in the park, but if you go in winter you should be prepared with a vehicle that can handle the conditions. Ideally, your car should be all-wheel drive, have some clearance from the ground, and be equipped with snow tires. If you don’t have snow tires, then you’ll need chains. Most of the roads in the area have areas next to the road to pull over and affix your chains. You should put them on at the first opportunity as conditions can change quickly.

Top tip: Consider renting a camper van, which comes with winter tires and snow chains, for ease of travel and accommodation all rolled up in one.

From Tokyo, the drive to Myōkō-Togakushi Renzan National Park is about 3.5 to 4.5 hours, depending on traffic and weather. From the Jōshin-etsu Expressway, either the Shinanomachi Interchange or the Myokokogen Interchange offer good access to the area. When off the expressway, the main road that traverses the area is National Route 18.

Most attractions in the area have plenty of free parking.