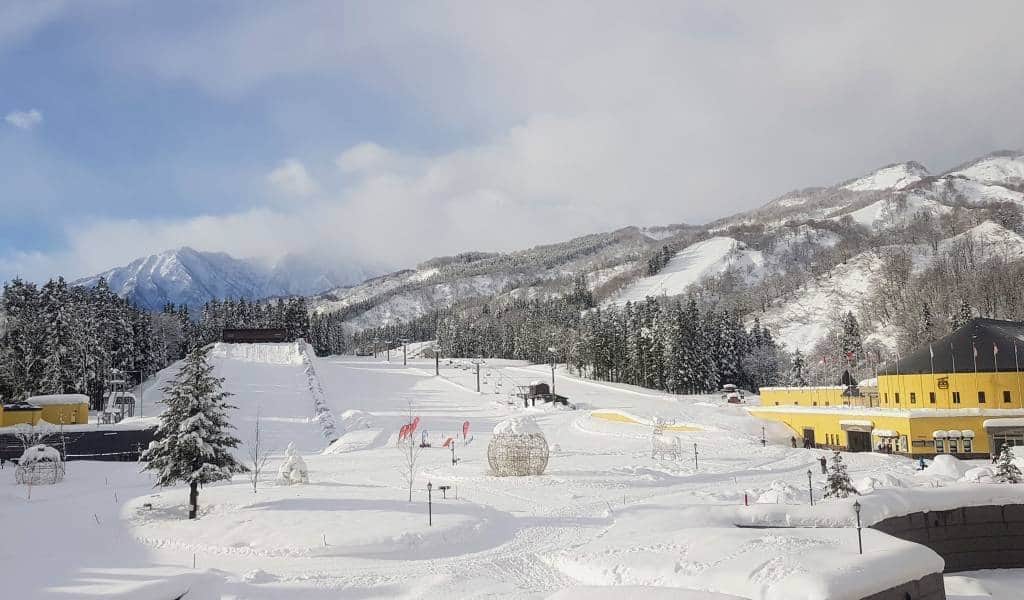 Lotte Arai Resort is a ski and snowboarding resort owned by Korean conglomerate Lotte on the slopes of Mount Okenashi in Myoko City, Niigata. Although the resort is in Myoko City, it’s not usually considered one of the Myoko resorts because it’s not actually on Mount Myoko. However, it’s only a 30 minute drive from the Mount Myoko area that is home to resorts like Akakura Onsen and Ikenotaira Onsen.

The resort itself isn’t huge, but it is among the newest resorts in Japan and has won awards for being Japan’s best ski resort. The integrated hotel and restaurants at the base make it a comfortable and convenient place for a family holiday, but it is by no means cheap! The incredible 16 meters of snow fall each winter mean that there is plentiful powder on offer from December through to March.

Althought there are a good mix of green, blue, and black runs, some of the green runs are very flat, with a significant step-up to the steeper blue runs.

The following passes and prices are valid for the 2020/21 season. Passes are available at the base of the gondola. They’re also the most expensive lifts in Japan. Additionally, there are no senior passes or discounts for high school age kids.

If you don’t have your own skis or snowboard, or your gear needs some tuning, there are limited options at the base of the resort since there is no village around the resort. Rentals are provided by Salomon Station which is within the Village Station building at the base of the Gondola. As the name suggests, all the gear is by Salomon. A standard set for either skiing or snowboarding (including boots and skis/board but not helmet or clothing) is ¥6,000 for a day.

At the moment, the only school that offers both ski and snowboard lessons in English is Myoko Snowsports. During the 2020/21 season, Myoko Snowsports were only offering private lessons for adults, so it’s best to get a group together to reduce the per-person price.

There are two restaurants in the Village Station building at the base of the gondola. One is a cafe that serves great coffee and local Myoko beer along with simple food like paninis and sandwiches. There is also a fast food type restaurant that gets very crowded on weekends. Further up the slopes, at the terminus of the Gondola is another large restaurant.

Additionally, there are four different restaurants within the hotel. Beco (steak), The Plate (buffet), and Asahi (Japanese) are quite high-end and not great value. Since it’s Korean owned, there is also a restaurant called Jongno that specialises in Korean Fried Chicken, along with other Korean specialties. It’s also much better value than the others. If there on a weekend or holiday, you’ll need to book ahead to ensure you get a table.

In addition to skiiing and snowboarding, there are often light shows and activities in the area at the base of the mountain in the evening. If you’ve had enough of sliding on the snow, there is also a high altitude zipline from Zendana Station for ¥6,000 for adults or ¥3,000 for elementary school-age children.

The hotel has an onsen with rotemburo (open-air pool) which is free for guests. If you are visiting for the day, you can use the onsen for ¥1,300 for adults and ¥700 for kids.

Lotte Arai Resort is a 15 minute journey by car from Arai Station on the Myoko Haneuma Line, which runs from Joetsu-Myoko Station. If coming from Tokyo, the best option is to alight at Joetsu Myoko Station on the Hokuriku Shinkansen (two stations past Nagano) and take the free shuttle to the resort (travel time 30 minutes) from the west exit bus stop. The shuttle bus is popular, so phone ahead to the resort to book your place on the shuttle. The journey on a Hakutaka Shinkansen service to Joetsu-Myoko takes about 1 hour 50 minutes and costs ¥9,580 for a one-way trip.

If going by private car, the journey from Tokyo will take from 3 to 4 hours depending on traffic and conditions. During winter, you should have chains or snow tires for the roads closer to the mountain. From the Joshin-etsu Expressway, take the Arai Smart Interchange exit.

Lotte Arai Resort is a fully self-contained resort, so there really isn’t anywhere to go in the immediate vicinity. However, if you get bored with the snow at Lotte Arai Resort, or if you just want to see the surrounding area, there are regularly scheduled shuttles and buses to take you elsewhere.

The Lotte Arai Shuttle connects the resort with Akakura Onsen over on neighboring Mt. Myoko for ¥1,500. Shuttles leave about four or five times each day. The trip takes about one hour.

Staying at the resort is the obvious place, and the convenience is great if you can afford it. However, during the snow season, prices start at about ¥40,000/night for a twin room. Off-peak, if you don’t mind the Spring slush, you can often get rooms for less than half the peak price in April/May.

You don’t have to stay at the resort though. In fact, there is a very large covered car park for guests who are visiting for the day and you can base yourself in Joetsu or Myoko-Kogen for much less.

If you’re after the all-in-one resort experience though, Lotte Arai Resort is a great option.