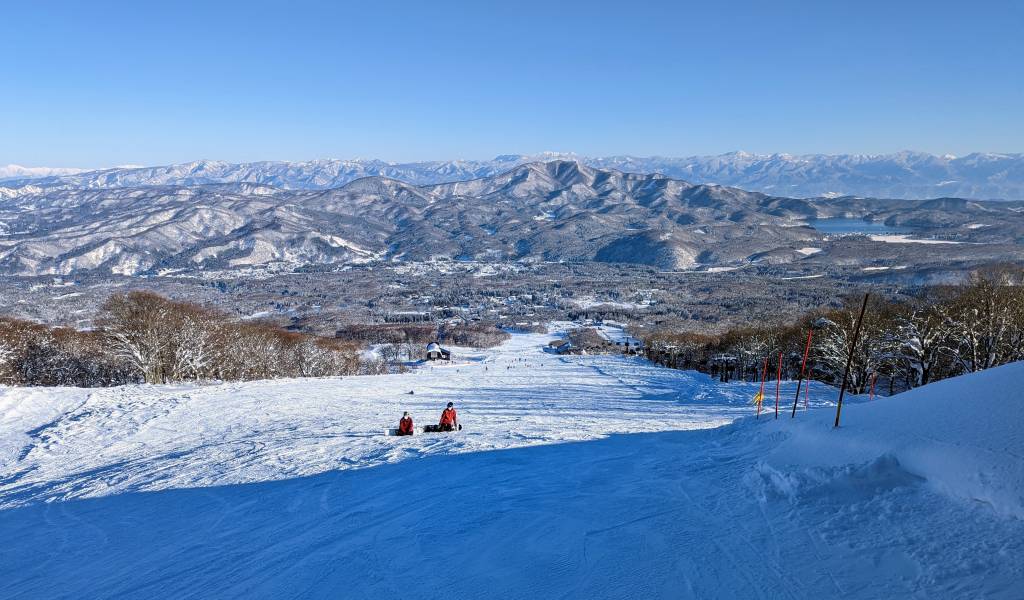 Alpen Blick Ikenotaira Onsen is one of four major ski resorts on the slopes of Mount Myoko—also known as the Echigo Fuji. The other resorts are Myoko Suginohara Ski Resort, Akakura Kanko, and Akakura Onsen.

Ikenotaira is popular with both skiers and boarders, but boarders tend to outnumber the skiers. A particular feature of “Ike” is the very wide main run—purportedly the widest in Japan. This means that you can practice those huge carving turns without too much danger of collecting other skiers or snowboarders.

The following passes and prices are valid for the 2020/21 season. Passes are available at the lift pass kiosk and also at Landmark Myoko Kogen, at the base of the ski area. There are online coupons (which you can present with your phone) if you are in a group of 5 or 10. There are also plenty of family tickets which provide good discounts. Compared to some other ski areas, prices are quite low. The lifts are definitely on the slow side though.

* – There are other family configurations available for various prices.

There are two rental shops at the base of the resort. Ski/snowboard (not including pants, jackets, goggles and helmet) sets start at ¥4,000/day for adults.

There are four main ski and snowboarding schools that operate at the resort, but all offer lessons in Japanese only. Additionally, GoMyoko, which offers private lessons, has its main office at the base of Ikenotaira.

Among the eateries at Ikenotaira Onsen is the Myoko Kogen Brewery restaurant. In typical Japanese fashion for a beer restaurant, it is German themed, with a beer hall-like atmosphere and food to match. The restaurant specialises in “Viking” (the Japanese term for buffet). Dinner is available for ¥3,000 per person. You can add a 90-minute all-you-can drink beer option for an additional ¥1,620. For cheaper eats, there is also a branch of Go Go Curry—the bright yellow curry shop with the angry gorilla on their sign, which is open for lunch only.

GoMyoko runs a popular restaurant at the bottom of the lifts that serves reasonably priced Myoko Beer, fancy coffee, as well as burgers and fish & chips.

Ikenotaira Onsen Ski Resort is about 5 km from Myoko Kogen Station, which is the terminus of the Shinano Line, which runs from Nagano Station, and the Myoko Haneuma Line, which runs from Joetsu-Myoko Station. Both Nagano Station and Joetsu Myoko Station are on the Hokuriku Shinkansen. Nagano Station is closer to Tokyo, but depending on connecting trains, transferring at Joetsu-Myoko can sometimes get you there earlier. The journey on a Hakutaka service via Joetsu-Myoko takes about 3 hours and costs ¥9,580 for a one-way trip. Via Nagano on an Asama service, the trip takes 2 hours and 40 minutes and costs ¥8,660 for a one-way ticket.

From outside the station, Kogen Taxi can take you to Ikenotaira Onsen in about 8 minutes for ¥1,800. If you make prior arrangements, there are larger taxis (seating up to 9 people) that can take you to the resort for slightly more.

If going by private car, the journey from Tokyo will take from 4 to 5 hours depending on traffic and conditions. During winter, you should have chains or snow tires for the roads closer to the mountain. From the Joshin-etsu Expressway, take the Myoko-Kogen Interchange exit. There is parking at the base of the resort for 1,200 cars.

There are a number of scheduled buses run by different companies that leave from Landmark Myoko Kogen at the base of the resort.

The Myoko Shuttle connects the ski resorts on the side of Mount Myoko with 12 services each day departing Ikenotaira Onsen and Landmark Myokokogen from 8 am until 5 pm. The Myoko Shuttle stops at Akakura Kanko, Akakura Onsen, and Myoko Suginohara Onsen Ski Resort. Tickets are a flat ¥500.

The aforementioned Myoko Taxi can also whiz you around the place. A taxi from Ikenotaira Onsen to the (small) local hospital will set you back ¥2,700 while a trip to one of the larger hospitals will cost from about ¥6,000 to ¥9,000.