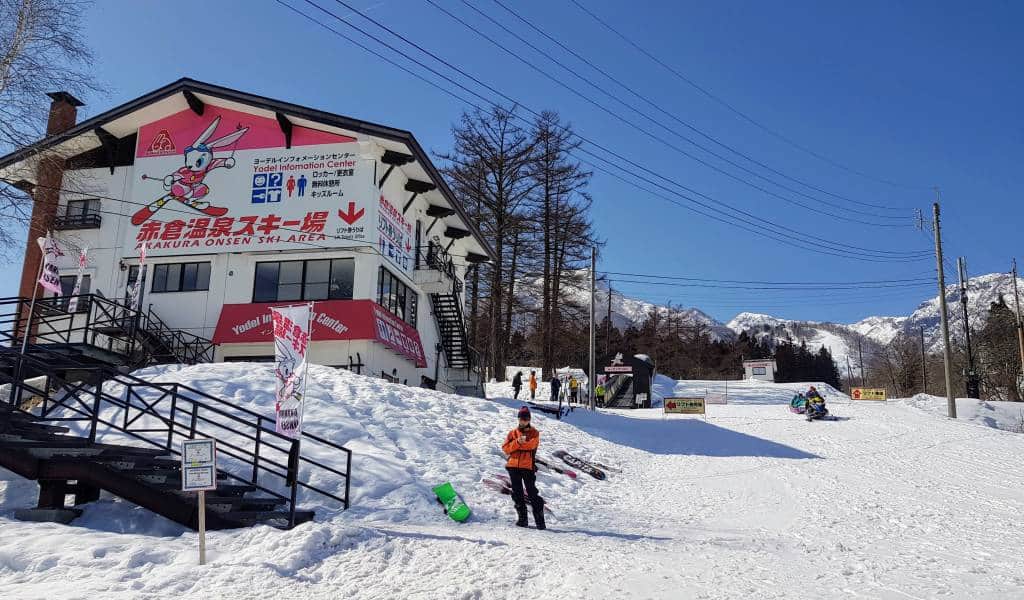 Akakura Onsen is one of the world’s oldest ski areas, opening in the 1930s as Japan’s first international ski resort.

The resort consists of three main zones—Yodel, Kumado and Ginrei. Altogether, the resort has 14 lifts and 17 different runs, with a longest run of 3 km. Skiers and snowboarders can crossover into the neighboring Akakura Kanko Ski Resort for which there is a shared lift pass available.

The all-mountain passes allow skiers and snowboarders to use the neighboring Akakura Kanko Resort lifts as well. However, even with just an Akakura Onsen lift pass, you can cross into Akakura Kanko at any time—you just can’t use any of their lifts to return to the top of the mountain.

If you don’t have your own skis or snowboard, or your gear needs some tuning, there are a large number of options at the base of the ski area. Myoko Snowsports (also mentioned in the lessons section below) has English-speaking staff and a wide range of skis, snowboards, clothing, and helmets for all sizes and skill levels. Yukibancho also has an English ordering page and lots of gear—including powder boards for intermediate to advanced riders.

At the moment, the schools that offer both ski and snowboard lessons in English are Myoko Snowsports, Yodel Snow School, and Go Myoko.

The Akakura Onsen village predates the ski area, but it developed rapidly in the 1950s and 60s—which is why it looks rather old and shabby. While there aren’t any nightclubs on the main street, there are plenty of cafes, bars, and restaurants to keep you nourished. Akakura Crepe has been serving an astounding variety of crepes for more than 30 years.

If the weather is poor on the mountain or your body has had enough, there are other activities such as snowshoeing and snow mobile tours. There are also daily tours that leave Akakura Onsen for the Jigokudani Snow Monkeys in neighboring Nagano Prefecture.

Additionally there are a variety of services for weary bodies including yoga classes, an English-speaking physiotherapy clinic, a pharmacy (good for pain killers for those aches and pains), and a small supermarket/convenience store. There is a single ATM at the post office. Some stores and businesses in the village operate on a cash-only basis.

Akakura Onsen Ski Resort is about 5 km from Myoko Kogen Station (don’t even think about walking), which is the terminus of the Shinano Line, which runs from Nagano Station, and the Myoko Haneuma Line, which runs from Joetsu-Myoko Station. Both Nagano Station and Joetsu Myoko Station are on the Hokuriku Shinkansen. Nagano Station is closer to Tokyo, but depending on connecting trains, transferring at Joetsu-Myoko can sometimes get you there earlier. The journey on a Hakutaka service via Joetsu-Myoko takes about 3 hours and costs ¥9,580 for a one-way trip. Via Nagano on an Asama service, the trip takes 2 hours and 40 minutes and costs ¥8,660 for a one-way ticket.

From outside the station, Kogen Taxi can take you to Akakura Onsen in about 10 minutes for ¥2,700. If you make prior arrangements, there are larger taxis (seating up to 9 people) that can take you to the resort for ¥3,700.

If going by private car, the journey from Tokyo will take from 4 to 5 hours depending on traffic and conditions. During winter, you should have chains or snow tires for the roads closer to the mountain. From the Joshin-etsu Expressway, take the Myoko-Kogen Interchange exit.

Although the village is quite walkable, the lifts are quite spread out at the bottom. If you can’t get a drop off from your accommodation, you can also catch the pink Akakura Onsen shuttles for free if you have a lift pass.

There are a number of scheduled buses run by different companies that leave from the Akakura Onsen bus stop which is opposite the Yodel Information Center.

There are three different shuttles that connect nearby resorts. The Myoko Shuttle is the most frequent, connecting the ski resorts on the side of Mount Myoko with 12 services each day departing Akakura Onsen from 8 am until 5 pm. The Myoko Shuttle stops at Akakura Kanko, Ikenotaira Onsen Ski Resort, and Myoko Suginohara Onsen Ski Resort. Tickets are a flat ¥500. The Madarao Shuttle connects Akakura Onsen with the Tangram and Madarao resorts. Services run only twice each day—departing at 8 am and 4 pm. Tickets for the Madaro Shuttle cost from ¥500 to ¥1,500 depending on destination. Lastly, the Lotte Arai Shuttle connects Akakura Onsen with the fancy pants Lotte Arai Resort over on neighboring Mt. Ogenashi for ¥1,500. Shuttles leave about four or five times each day. The trip takes about one hour.

The aforementioned Myoko Taxi can also whiz you around the place. A taxi from Akakura Onsen to the (small) local hospital will set you back ¥2,700 while a trip to one of the larger hospitals will cost from about ¥6,000 to ¥9,000.

There are a large number of pensions and lodges in the village, although many look like they were built in the 1970s or 1980s, so facilities may be a little dated and sometimes not suited to the needs of international visitors. For example, some rooms don’t have private bathrooms, the assumption being that guests will use the the shared bathing onsen attached to each hotel. We think onsen are pretty awesome after a day on the slopes, but you might have trouble convincing your teenage children to get naked with you in the bath.

There are lodges run by foreign residents in the area such as Morino Lodge which cater for international guests. You’ll get less of the Japanese service experience, but the atmosphere is relaxed and friendly and the staff are very helpful.