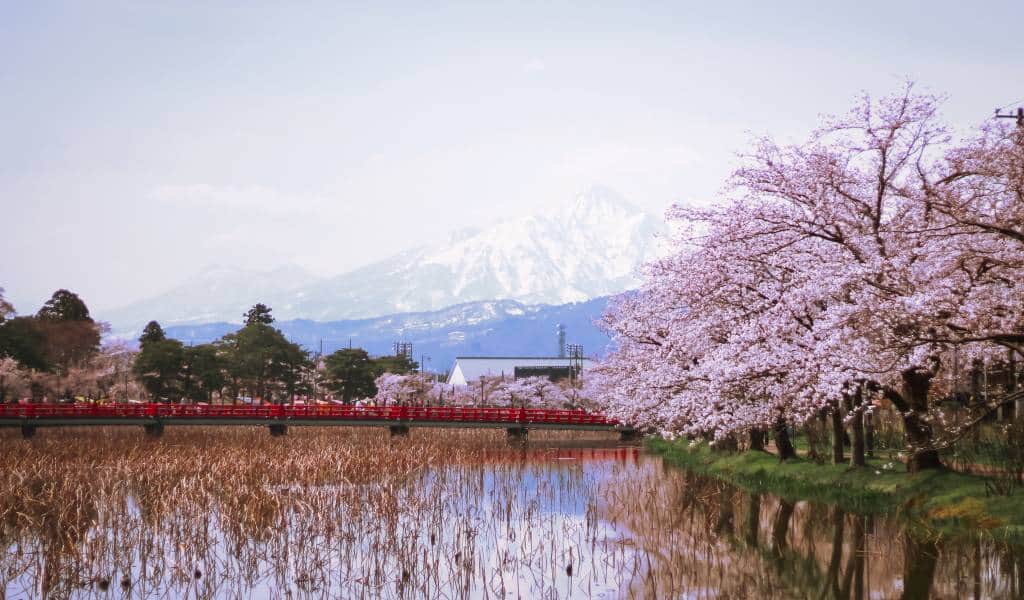 Cities and Towns in Niigata

Niigata Prefecture is located on the island of Honshu, on the coast of the Sea of Japan. Niigata is a popular location when it comes to hot springs, skiing and bathing beaches. The area is also known for having “the best rice in Japan,” but so are all other prefectures in Japan. Additionally, Niigata boasts about having the longest river in Japan, the Shinano River.

Niigata is the last stop for the Joetsu Shinkansen from Tokyo. The ride lasts roughly 2 hours. From Osaka, Kyoto and Kobe, the ride is about 5 hours. You can book Shinkansen tickets in advance.

Niigata has one airport with a few international arrivals per week and frequent local flights from diverse locations like Osaka, Tokyo, Sapporo, Nagoya, etc. Flights from Tokyo can be as cheap as ¥30,000 for the round trip if bought ahead of time.

Read our comprehensive guide on getting from Tokyo to Niigata.

There are buses and trains throughout Niigata Prefecture, but like everywhere else they get a little scarce in the rural areas. So if you want to go a bit farther than Niigata city it’s worth considering renting a car at the airport or in Niigata city. The car rentals are conveniently located nearby Niigata Station. Also, if you would like to explore Sado, Niigata’s island, ferries leave Niigata Port daily and can transport vehicles.

If rock climbing or hiking is your thing then Mount Tanigawa is a must. Mount Tanigawa is located on the border of Gunma Prefecture and Niigata Prefecture, which allows you to go on a 8-hour-long hike from one prefecture to another. Although not nearly as high (or well-known) as Mount Fuji, Mount Tanigawa, with its craggy and rugged routes, makes it to the top 100 famous mountains in Japan.
Even if you’re not into the whole hiking thing you can take a ropeway to the top of the mount in order to take selfies with a pretty landscape in the background. If you rent a car getting there is fairly easy. The ride lasts about an hour and a half and there are parking lots nearby the mount. However, the roads to the mount are closed during winter season (November 18 – May 30). From Niigata station you should take the JR Joetsu Shinkansen Max Toki towards Tokyo and in Echigoyuzawa Station change to the JR Joetsu Shinkansen Max Tanigawa to Jomokogen Station. The mount is located about 50 minutes by local bus from Jomokogen Station. The whole route costs approximately ¥8,000.

Sasagawa-nagare is the coast of Murakami City and is located about 65 km from Niigata City. Unlike beaches in Kanagawa prefecture, for example, Sasagawa-nagare’s water is transparent and its cliffs give off an “uninhabited-island” vibe. Except during summer the beaches are crowded, which fortunately does not ruin the beautiful sunsets.

Sado is an island located to the northwest of Honshu and it belongs to Niigata prefecture. Daily ferries leave Niigata’s main port for Sado so getting there isn’t hard at all. The cheapest ferry costs about ¥3,000 and the most expensive ¥6,000. Also the ferries have two different routes, one departing from Niigata Port and arriving in Ryotsu Port (north of the island) and one departing from Naoetsu Port and arriving in Ogi Port (south of the island). Both ferries take about 3 hours to get to Sado and both can transport vehicles, so if you want to bring your car we recommend making a reservation. Another option is the Jet Foil that departs from Niigata Port and arrives in Ryotsu. This is the fastest ferry and also the most expensive; it costs about ¥6,000 one way.

Sado is home to the Japanese Crested Ibis, once extinct in the wild but successfully reintroduced in the island. The island’s rural and relaxed atmosphere as well as its historical background, for Sado used to be a destination for political exiles like the Buddhist monk Nichiren, attract tourists from all over Japan. Also, Sado is the home of one of the most famous taiko drumming groups: Kodo. The drumming troupe regularly tours Japan, Europe and the United States so if you’re in Sado by the end of August make sure to check out their annual Earth Celebration festival that lasts for three days.

All Articles about Niigata

Things To Do in Niigata

Getting Around in Niigata