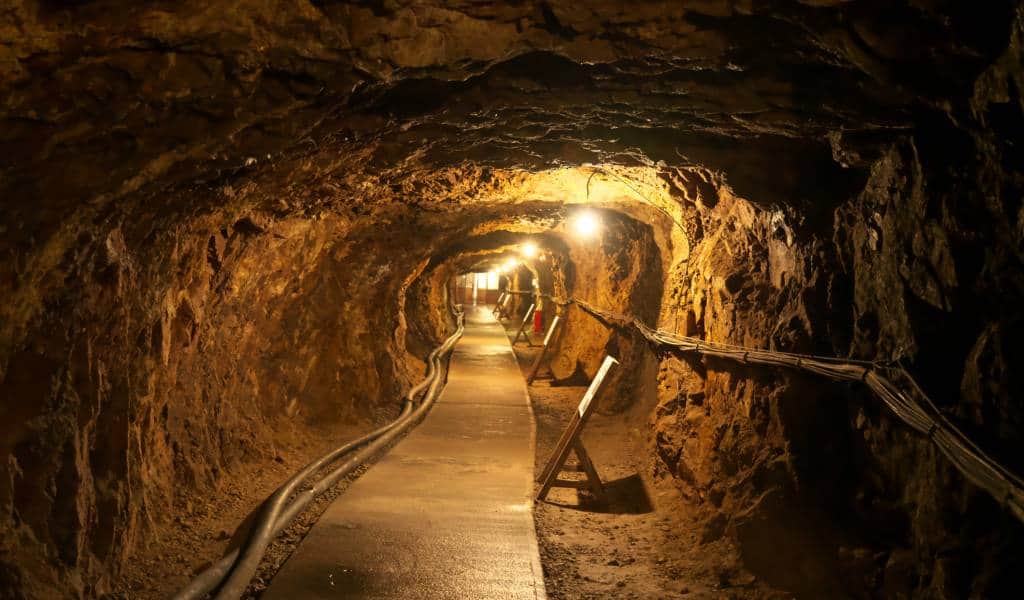 The Heritage of Sado—Japan's Golden Isle of Exile

Lost in the Sea of Japan, Sado is not the first place you might think of for an island getaway. But look a little closer, and you’ll find all the color you need for a great trip: the glistening gold of Sado’s historic mines, the bright red crest of the island’s iconic bird, rich green mountains, and white, sandy beaches.

Sado is Japan’s largest outlying island, located just an hour off the coast of Niigata by fast ferry. It is blessed with a rich wealth of natural, historic, cultural, and even avian sights! There is far too much on the island to fill just a single article, but here are some of the highlights, to help inspire you to book a train ticket to Niigata and begin planning your own Sado adventure.

For many centuries, the rich gold deposits on Sado were the mainstay of the island’s economy, though mining activity finally stopped in 1989. Today, the former mining area is a tourist attraction, and has been nominated as a World Heritage Site. There are a wide range of activities on offer in the area: explore old mining tunnels underground; gape at the hacked out mountain, rising over rotting railway equipment; visit the photogenic ruins of enormous WWII era mining facilities; or stroll the old mining town, with its quaint, sloped alleys, and wooden houses built from gold rush wealth. Even those who are not mining buffs should find something of interest here.

The mining area is centered on the seaside town of Aikawa, located on Sado’s west coast. It’s about an hour’s bus ride away from Ryotsu, the main ferry port on Sado’s east coast. Many attractions are in the town itself, including the older neighborhoods where the miners lived, and much of the grandest ruined mining equipment, which is freely lying about outside. The old mining tunnels, perhaps the best known site, are about 2km inland (it’s a pleasant walk there through the forest, along the old trails that the miners used to use to go to work). There are two quite different sections open to the public, costing ¥900 each, or ¥1,400 for both. You could easily spend all day in Aikawa and the mining area, if you wanted to try and see everything.

With an isolated location that cut it off from war and development, Sado has some of the best traditional architecture to be found anywhere in Eastern Japan. Old temples, shrines, and farmhouses dot the island. Of particular interest are Sado’s Noh stages. Over two dozen stages remain on the island, a testament to the popularity here of the traditional drama form of Noh. The stages come in many shapes and sizes, and are found everywhere from shrines to village clearings to the courtyards of people’s houses. Most date to the 19th century, and a few have attractive thatch roofs. They are a unique part of Sado’s rural landscapes, and most still host performances at least once a year.

Sado’s Noh stages are spread all over the island, and you’ll need your own wheels to see a good selection of them. For those with more limited means of transportation, there are a couple of interesting stages near the Ryotsu ferry port. The stage at the Shizaki Suwa Shrine is only a 20 minute walk away, while the impressive Honma Family Stage (the Honma family traditionally worked as Noh actors) is only 10 minutes away by bus (it’s the same line which runs to the main Toki breeding center—see below for details).

The old mining town of Aikawa is Sado’s best known traditional neighborhood, but visitors to the southern coast of the island can also delight in a string of picturesque coastal villages. With little flat land along the sea here, the villages hug coves, or fill up tiny coastal plains. Some have dramatic rice terraces rising in the heights above the Sea of Japan. Not to be missed is the village of Shukunegi, claustrophobically crammed into a very small valley. It’s a warren of photogenic alleyways and traditional houses. Some are open to the public, with a ticket purchase (about ¥300 each), though just wandering the narrow streets is fun enough.

Shukunegi is in the far south of Sado, less than 5km away from Ogi Port (where boats from Joetsu arrive in summer). There is a limited service of 3-4 buses a day. Once in Ogi, there are more frequent buses to the rest of Sado. Shukunegi is best combined with some of the pretty coastal scenery in the region, some of which can be seen by hiking between the village and Ogi.

If you catch the ferry to Sado from Niigata at night, then the first vision that you will have of the island is the blinking light emanating from this lighthouse. At the tip of a prominent and isolated peninsula, Himezaki Lighthouse has been greeting nighttime visitors to Sado since its first illumination, in 1895. It is, in fact, Japan’s oldest iron lighthouse, and is an unusual and rather picturesque building. Most will be happy with a brief stop to snap some photos, but travelers with tents might consider a longer stay: there’s a beautiful, quiet campsite next to the lighthouse.

For those without a vehicle, the lighthouse and campsite are served by 3-4 buses a day from the main port at Ryotsu. The lighthouse is accessed via a narrow road, and is about a 10 minute walk away from the nearest bus stop.

Sado has a coastline of 262km, and much of it is spectacular. The volcanic mountains here have created a myriad of dramatic cliffs, grand rocks, and intriguing geological formations, scattered all over the island. Senkakuwan Bay, just north of the gold mine, has some particularly scenic cliffs, but also an entry fee of ¥550. Those who prefer to see their coastal rocks for free will find lots of good spots elsewhere, like Onogame and Futatsugame in the far north of the island, or the small rocky outcroppings of Yajima and Kyojima in the far south.

If you come in summer, bring a bathing suit: there are also some lovely beaches hidden away on Sado’s coasts.
Senkakuwan Bay is fairly easy to get to, with at least 8 buses a day running there from Aikawa, the gold mining town. Onogame and Futatsugme are more isolated, with only half as many buses. These take over an hour from the port at Ryotsu, though the two scenic spots are then within walking distance of each other. Yajima and Kyojima are best visited while hiking between the traditional village of Shukunegi and Ogi—see above for details.

The crested ibis, known as toki in Japanese, is a symbol of Sado. These large white birds, with distinctive red faces, became extinct in Japan in the 20th century, but a breeding and reintroduction program on the island of Sado has sent them soaring again. There are two breeding centers on the island that are open to the public, where you can see the magnificent toki up close. But better still, keep your eyes up above the rice paddies, and you might be lucky enough to spot a wild toki, filling up the sky with its great white wings.

The main breeding center is located in the center of Sado, about a 15 minute drive away from the port at Ryotsu. Buses take a half hour, and make the trip 6-8 times a day. The center charges visitors ¥400. The other center is a little further away from the port and is not served by public transport, though it’s free to visit. It sits next to the Toki Terrace viewpoint.

Sado has an unusual shape. It’s composed of two long, parallel mountain ranges, and an arable lowland region between them, where most of the people live. With tall mountains on either side of this plain, there are plenty of great places to take in the view. If the weather is sunny and clear, make a beeline to the aptly named “Osado Skyline Viewpoint”. At over 900 meters above sea level, it provides beautiful vistas over the island, and even the mountains in mainland Niigata, if you’re lucky. South of the plain, the Toki Terrace is another good spot for taking in the views.

The areas around these viewpoints are not inhabited, and they are not served by public transport. If the weather’s nice, and you have a lot of energy, you could hike up to the Osado Skyline Viewpoint from the gold mining town of Aikawa. Just take the road past the gold mine tunnels, and keep going up. Count on hiking for a few hours, up and down, and bring plenty of water. In good weather, the views will be worth it!

Sado is big and spread out, and the easiest way to get around is with your own wheels – either a rental car, or a bicycle. For those relying on public transport, the old mining town of Aikawa is a good base. There are plenty of mining sights nearby, and also some lovely stretches of coastline. While certainly less developed than the mainland, Sado does have a handful of convenience stores, some well-stocked supermarkets, and plenty of hotels and restaurants, at least in the more central parts of the island.

Sado has a reasonable bus network which covers much of the island, though buses to more outlying places are infrequent, and visitors relying on them will have to plan their days carefully. The two ports of Ryotsu (with ferries from Niigata) and Ogi (with ferries from Joetsu) are major bus hubs, while the gold mining town of Aikawa is well served.

Sado is accessible only by boat, from the cities of either Niigata or Joetsu. Though somewhat inconvenient, the lack of airplane access does seem to keep visitor numbers down. With a ferry port in the center of town, a short distance away from Tokyo-bound Shinkansen trains, Niigata is the main gateway to the island.

There are two types of boats running from Niigata: car ferries, which take about 2 and a half hours and cost ¥2,810 one way; and jetfoils, which take just over an hour and cost ¥6,900 one way. Both boats run 5 times a day, in each direction, and both serve the port of Ryotsu on Sado’s east coast. Ryotsu is a large town, with hotels and other facilities located close to the ferry port. It’s also one of the main centers on the island for local buses.

The other option is to catch a jetfoil from the port of Naoetsu, in the city of Joetsu, also in Niigata Prefecture. This jetfoil takes a little over an hour, and costs ¥7,110 one way. It runs twice a day in each direction, but only in the warmer months of the year, roughly from Golden Week until October. This jetfoil serves the port of Ogi on Sado’s south coast. Ogi is a small town with sparse facilities, but has bus connections to other parts of the island.

Note that with all the ferries, small discounts are offered for return tickets, while it’s also possible to bring cars and other vehicles on the car ferry. Prices start at roughly ¥30,000 return for a small car with driver.