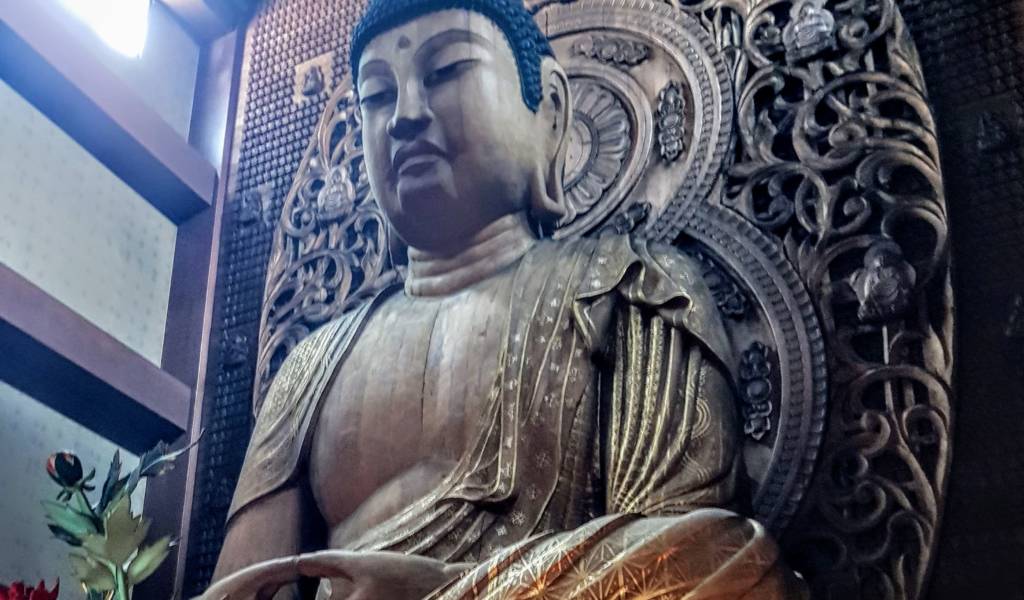 Located a short distance from Hakata Station, Tōchō-ji is a temple with a long history but of relatively recent construction.

The highlight of the temple is a seated statue of the Buddha carved from wood. At a height of 16.1 meters, the statue is claimed to be the largest seated buddha of its kind in Japan.

Work on the Buddha began in 1988 and took 4 years to complete.

On the left side base of the statue, there is an entry way to a small museum. The last part of the passageway before emerging on the right side of the statue is in complete darkness. If you have faith, keen walking. If not, you can always use your phone’s flashlight function!

The temple is thought to have been established by renowned Buddhist prosthelytizer Kobo-daishi in the year 806. After destruction by fire, the temple was moved to its current site in the early 17th century by the Kuroda clan, who were the feudal rulers of Chikuzen Province, with Fukuoka at its center. The graves of the second, third and eighth rulers of the province are housed within the temple.

Most of the structures appear to be of reatively modern construction (the pagoda was completed in 2011). However, the relatively dimunitive hexagonal building dates from the early 19th century.

Entry to the temple is free, but entry to the hall housing the great Buddha is ¥50.

If using Google Maps for directions, don’t follow the directions down a backstreet. Entry to the temple is from the busy Taihaku-dori Avenue side.