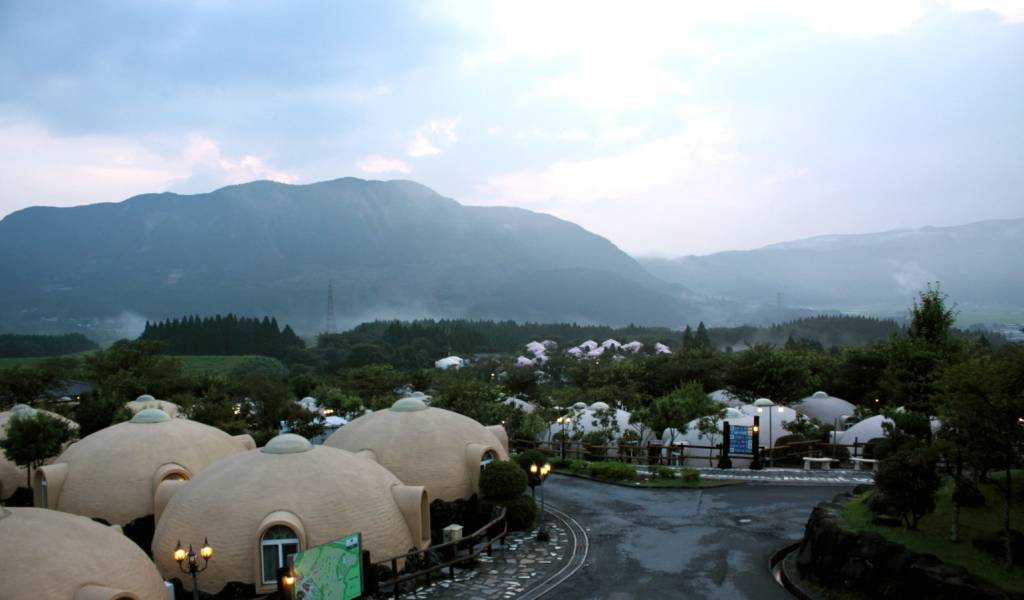 Aso Farm Village is a mountain resort on the lower foothills of Mt. Aso – Japan’s most active volcano. The unique resort accommodation consists of hundreds of concrete domes – like houses from a fairy tale village where rabbits wear waistcoats and frogs ride bicycles.

The big appeal of the resort, aside from the clean (and cool) mountain air is the connected onsen as well as the farm theme-park for which it is named.

The onsen is a adventure theme park in itself, with an extensive selection of rotenburo (outdoor hot pools) surrounded by raked Zen gardens. In addition to the pools there is a large sauna and room with hot stone beds (that’s slightly more appealing than it sounds). While summer may seem like a strange season to visit, the evening air temperature is comfortable and even a little cool. So you won’t freeze your nether regions off wandering from pool to pool in the outside area.

The rooms feel very spacious to my space starved Tokyo eyes with a huge king size bed – a rarity in Japanese accommodation. Being in the middle of nowhere, nighttime is dead quiet. Unfortunately, the low hum lullaby of the city has turned me into a terribly light sleeper so the sound of an insane cicada repeatedly attempting to enter my room through a closed window kept me awake longer than it should have.

Because of the elevation, mornings typically begin in the clouds – with a cool mist shrouding the dome village. On the day I visited, the mist quickly burned off to reveal the surrounding mountains and a hazy summer sky.

The park did sustain quite some damage from the Kumamoto Earthquake, but more to the common facilities such as halls, pathways and walls. The good news is, the domes stood up to the shaking – as did the onsen. According to the management, not a single one of the accommodation domes sustained any damaged – attesting to their sturdy design and construction.