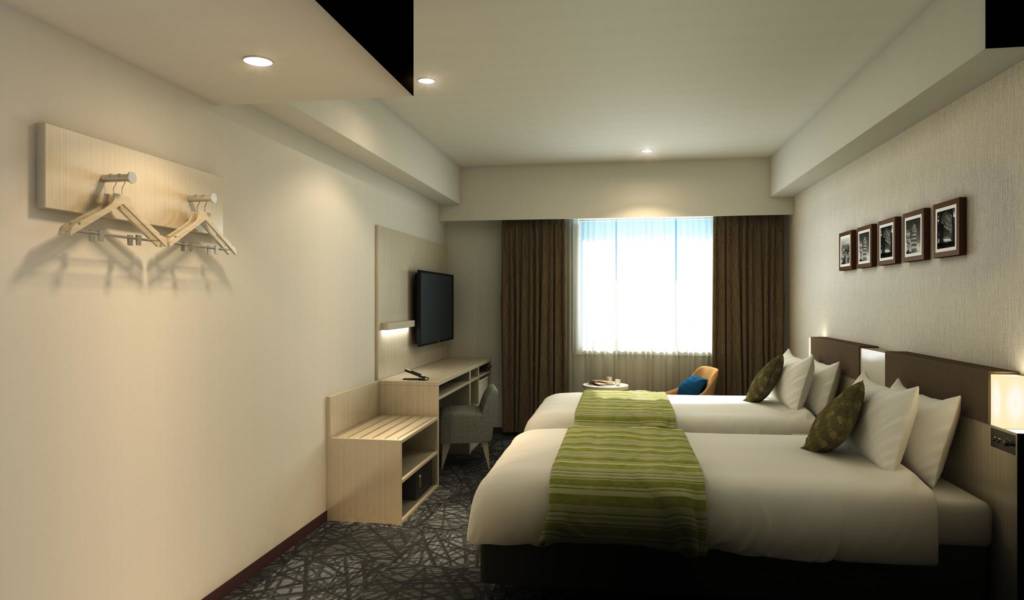 Compatible with a diverse range of scenes, from tourism, business trips, conferences to receptions and is also near Tenmonkan, which is a bustling thorough area.

The location is two minutes’ walk from the Takamibaba Station of Kagoshima City Tram, which can be taken from Kagoshima Chuo Station on JR Line. It is three minutes’ walk from Tenmonkan Stop to get the bus from Kagoshima Airport, which is a 50 minute ride. Tenmonkan is a renowned bustling thorough area and the largest of its kind in Kagoshima, a popular location where the arcade is filled with bars, restaurants, souvenir shops, boutiques and the like.

There are an abundance of bars and restaurants located in the vicinity of the hotel. “Kagoshima Black Pork” and “Kagoshima Black Cattle”, the local specialties of Kagoshima, as well as “Kibinago” Japanese sprats that are caught at sea nearby, along with “Satsumaage” or “Torimeshi” that represent local cuisines are recommended to our guests for tasting authentic local meals.

We invite you to come and stay with us not just for business or for tourism, but for any occasion.

The location is convenient for access to tourist destinations as well, located 12 minutes by car to “Kagoshima Main Port”, the gateway to “Sakurajima ”, which can be reached in 15 minutes on a ferry. The “Kagoshima City Aquarium” is 11 minutes away by car, while the villa “Sengan-en Garden (also known as Iso Teien Garden)” built by Mitsuhisa Shimazu is 14 minutes away by car, among many other destinations.

A convenience store and a self-service laundry are directly connected to the lobby of the hotel.