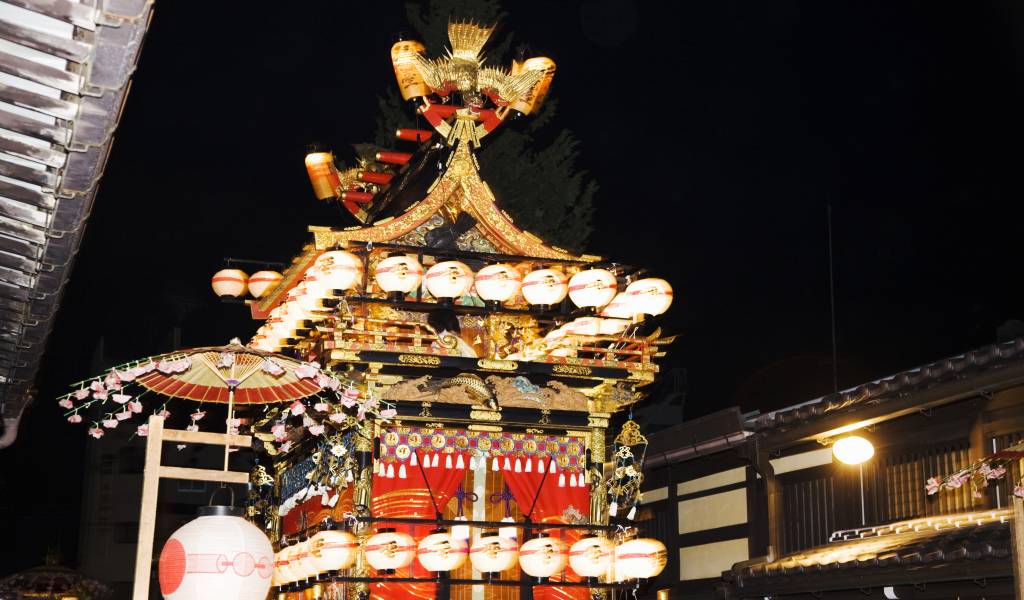 The Takayama Spring Festival, known locally as the Sanno Matsuri, is one of Japan’s most famous/popular festivals. It’s held at Hie Shrine in Takayama, which is a historic mountain town in Gifu Prefecture. The festival has three main attractions: a display of elaborate floats called yatai, a parade with mikoshi (shoulder borne portable shrines), and a kind of marionette performance.

Held in April, and as the name suggests, this is a spring festival — a spectacular prayer for a good harvest. The Takayama Autumn Festival, held at Hachiman Shrine in October, is similar and about giving thanks.

But what is really being celebrated here is Takayama’s artisan tradition, showcased in the floats and marionettes. Takayama, which is set in a valley among forested mountains, has a long tradition of woodworking. This can be seen in the town’s well-preserved historic core, with its 19th century lattice-fronted wooden row houses (Takayama’s principal attraction). All this skilled craftwork also made the town wealthier than many, which allowed it to host such an extravagent festival.

What happens at the Takayama Spring Festival?

Throughout the 14th and the 15th, the festival’s 12 yatai are out on display around the town’s historic core. The point is to go and admire the floats, each different and each adorned with intricate carvings, lacquerwork, and metalwork. On the evening of the 14th, the floats are bedecked with lanterns and paraded around the historic core for a few hours (6:30–9pm).

A few of the floats have karakuri, a kind of traditional Japanese marionette. On both days, once in the morning and once in the early afternoon, one of these floats will give a performance of its karakuri (orchestrated by a team of skilled puppeteers). The 50-minute performances are usually of traditional folktales or legends.

The parade, which includes a mikoshi procession, lion dances, musicians, and hundreds of people dressed in Edo period (1603–1868) attire, runs from Hie Shrine to a spot called Otabisho, which is a kind of rest stop for mikoshi on a ritual excursion, and back over two days. On the 14th, the procession departs from the shrine at 1pm, wends through the streets, and arrives at Otabisho by around 4pm. The following day, it leaves Otabisho at 12:30pm, returning to the shrine at 4pm.

Getting to the Takayama Spring Festival

Hie Shrine is a 20–25 minute walk from Takayama Station, which is on the JR Takayama and JR Hida lines. Nagoya is the nearest major city and rail hub. Hourly “Hida” limited express trains run from Nagoya to Takayama Station (and onwards to Toyama) without requiring a transfer. This costs ¥6,340 and takes around two and a half hours. There are also busses running from Osaka and Kyoto costing in the region of ¥4,000–¥6,000.

From Tokyo, you can either take the bullet train or a night bus to Toyama or Nagoya and catch the Hida limited express from at either end. We don’t recommend driving because of street closures around the festival and traffic. Central Takayama is compact and easy to get around without a car.

Takayama is within the JR Central Rail Pass area.

Accommodation gets booked up fast ahead of the two annual festivals but there are a good variety of options in the city overall. Some good hostel options include Relax Hostel near Takayama Station which offers capsule-style dorm rooms and K’s House which has private rooms and dorms – including double beds. If you’re after a hotel, Temple Hotel Zenko-ji is a classy option with tatami rooms and garden views. Offering a mix of traditional and Western styles, Takayama Ouan Hotel has the best of both worlds and is close to the station.