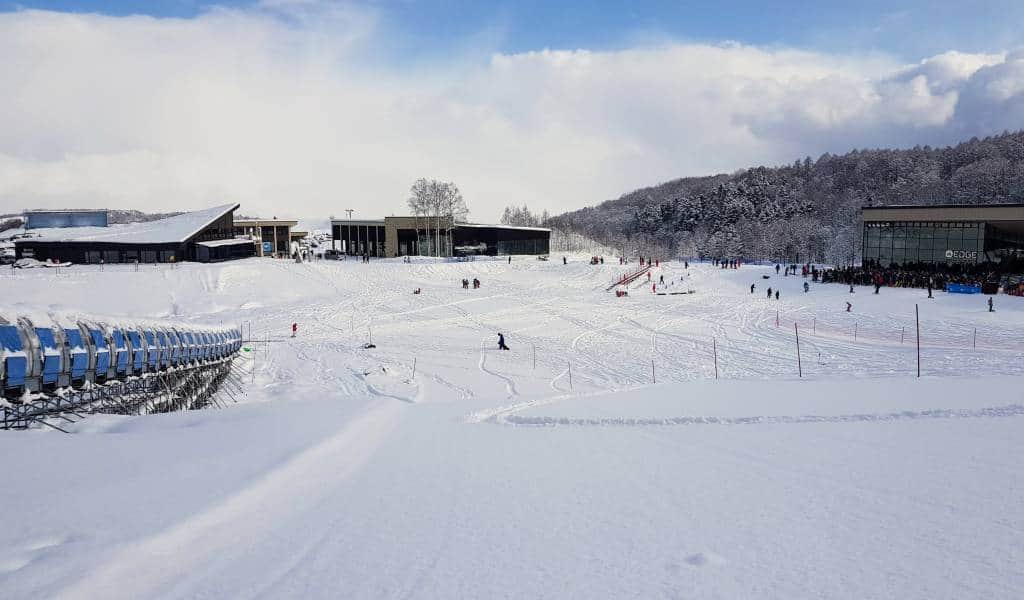 Niseko Hanazono Resort is one of five resorts on Mount Niseko-Annupuri and one of the four resorts that make up Niseko United. Although Hanazono is connected with the other three Niseko United resorts at the top of the mountain, the base of the resort is a ten minute bus ride from the main Hirafu village. The resort does have the best access of any of the resorts from Kutchan.

Although there are facilities for beginners, the terrain is generally more suited to intermediate skiers and boarders. “Silver Dream”, which is the longest green run on the mountain has a challenging drop in the middle, which may come as a shock to beginner skiers and snowboarders. Hanazono is especially famous for the “Strawberry Fields” off-piste area through the trees.

The following passes and prices are valid for the 2020/21 season. Passes are available at Hanazono 308. Passes are contactless and require a deposit which is returned when you return the pass. Although the single resort 1-day pass at Hanazono is relatively expensive, you can save ¥200 per person by booking online. They also often run package deals with lessons included. There are also 5-hour (¥5,200), 8-hour (¥5,500) and points based passes (¥500 per point) available if you don’t plan to be there all day. Prices are also significantly cheaper if you visit in the early or late season. The Early Season period is from early to mid December, while the Spring Season period is from late March until early April.

* – Allows use of the lifts on all four resorts under the Niseko United banner—Hanazono, Grand Hirafu, Niseko Village, and Annupuri. Note that you can traverse into any of the fields from Hanazono, you just won’t be able to go back up the mountain without an All Mountain pass.

Aside from the rental shops throughout the Niseko area, there is also ski and snowboard hire available at Hanazono 308 at the base of the resort through Niseko Sports. Ski/snowboard and boots (not including pants, jackets, goggles and helmet) sets start at ¥4,500/day for adults.

Lessons for all levels of skiers and boarders are provided by Niseko International Snowsports School (NISS). Due to COVID, NISS didn’t offer group lessons during the 2020/21 season, but hopefully these will be back for 2021/22. Adult private lessons are available from ¥30,000 for a 2 and 1/2 hour afternoon session for as many as 6 participants. Booking well in advance is strongly recommended.

Excluding the fancy pants restaurants in the Hanazono Park Hyatt, there are three food outlets at Hanazono—all at the base of the resort. Café Hanazono 308 is a small cafe with good coffee and snack-type meals inside the Hanazono 308 building. Hana1 Café is a small coffee kiosk near the bottom of the Hanazono Quad Lift #1. For a hearty (or boozy) lunch, there is the enormous Hanazono EDGE restaurant. With a capacity of hundreds, and a food-court selection of meals, you can pick up everything from an Aussie meat pie through to a huge bowl of ramen. Hanazono Edge is only open for lunch—opening at 11am and closing at 2pm.

Getting to Hanazono will likely require a combination of transport modes with most people prefering to fly into Sapporo’s Shin-Chitose Airport, and catching a bus directly to the Niseko Area. Train is another option from Shin Chitose Airport, but we don’t recommend catching the train all the way from Tokyo.

Some care is required when choosing which station to alight at. While Hirafu Station or Niseko Station appear much closer to the mountain, there are next to no facilities, no bus stop and no taxi stands at these stations. You should only consider alighting at these stations if you have someone picking you up. Instead, Kutchan Station on the Hakodate Main Line is the best station at which to alight. The trip from Shin-Chitose Airport takes from 2 1/2 to 3 hours and costs ¥2,880 for a one way ticket. From Shin-Chitose Airport, catch the Airport Express to Otaru (don’t get off at Sapporo) then change to the Hakodate Main Line bound for Kutchan. At Kutchan there are taxis to Hanazono for approximately ¥2,000 (slightly more at night) as well as regularly scheduled buses. The Donan and Niseko buses run from Kutchan Station to Niseko Hirafu and Hirafu Welcome Center respectively for ¥400. From there you can jump on the Niseko United Shuttles that connect the ski resorts.

You can also use the Japan Rail Pass to make your way up from Tokyo, but the section between the Shinkansen terminus in Shin-Hakodate Hokuto and Kutchan is not very well connected. Although it doesn’t look like much on the map, the last leg to Kutchan will add a stop in Oshamambe and an extra 3 to 5 hours to your trip.

Due to the convoluted way of getting to Niseko by train, most prefer to catch the buses that go to Niseko directly from Shin-Chitose Airport. The journey takes about 3 hours. Among the services are the White Liner (¥4,500), the Hokkaido Resort Liner (¥4,500), and the slower Chuo Bus (¥2,650). Booking in advance for all is essential. If you arrive at Shin-Chitose Airport at the peak of the season and expect to jump straight on a bus to Niseko, you’ll be out of luck. Additionally, none of the buses stop at Hanazono, so you’ll have to take the Niseko United shuttle or a taxi from Hirafu.

If going by private car or rental car, the journey from Chitose will take from 2 1/2 to 3 hours depending on traffic and conditions. During winter, you should have chains or snow tires on for the whole trip. There is free parking behind Hanazono 308 for a modest 200 cars.

Everything within Hanazono is within easy walking distance. Unlike the other resorts on Mount Niseko-Annupuri, there is no village next to Hanazono. Unless you’ve got the megabucks to stay at the Park Hyatt Niseko Hanazono, you’ll likely be staying in nearby Kutchan or Hirafu. Hirafu provides slightly better access by bus with regular Niseko United shuttles whizzing around. The Taxi from Kutchan to Hanazono is only about ¥2,000, so if there are two or three people in your group it’s pretty good value.