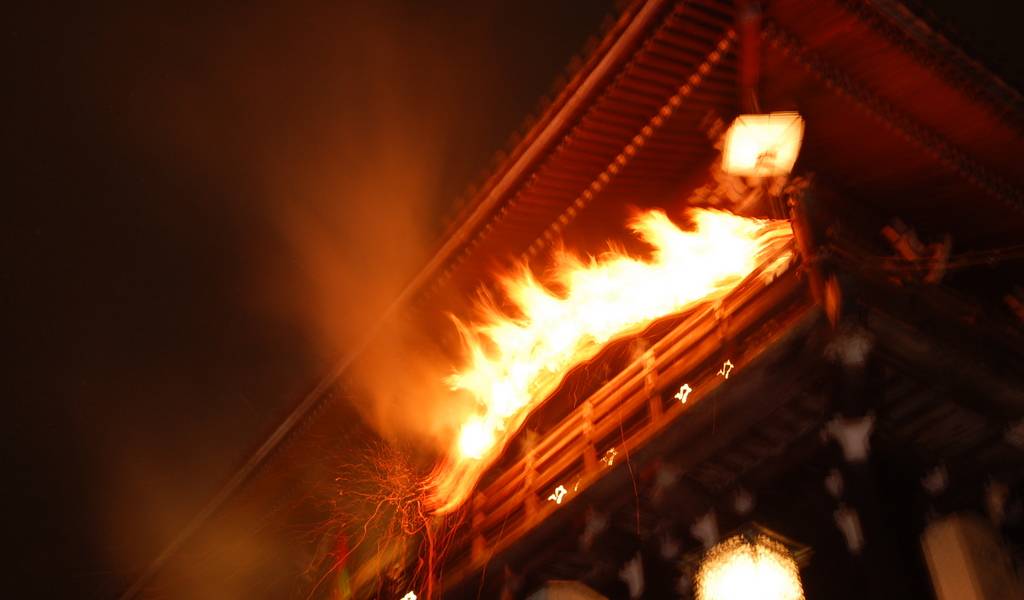 Omizutori is a 1250-year-old tradition known to be one of the oldest Buddhist ceremonies still performed today. It is held annually from the 1st to the 14th of March (the second month of the old lunar calendar) at Todai-ji Temple in Nara.

Specifically it is held at the temple’s Nigatsudo, which means something like “Hall of the 2nd Month,” as it was first built in 752 for the purpose of hosting the ceremony.

Omizutori is about purifying oneself of sins and welcoming the spring. Every evening for the first 11 days of the festival, and again on the 13th, ten young monks take turns on the temple’s veranda brandishing 6m-tall torches that rain embers down on the crowd. It’s said to be good luck if an ember lands on you. This part of the ceremony is called Otaimatsu and it happens for about 20 minutes from 7pm. But you’ll want to get there at least an hour or so earlier to get a spot. Note that due to COVID-19 precautions crowd sizes will be limited this year so you might want to get there extra early.

The biggest day of the event is March 12th, when the torches and the crowds are extra large. On this evening, the ceremonies start at 7:30pm and last 45 minutes, during which the crowd is moved along so everyone gets a chance to pass near the veranda. This year the 12th is closed to the public because it will be filmed for an NHK special.

On the 14th, an abbreviated, but dramatic version of the festivities takes place, with all 10 torches lit at once for one swift and bright 10 minutes, starting at 6:30pm.

What about the water — Omizutori means “Drawing of the Water” — you ask? During one of the parts of the ceremony that happens in secret, very early in the morning on the 13th, temple priests draw water from a well that supposedly only flows on this one occasion during the year. This water is believed to have curative powers, and is offered first to Kannon and other deities and then the public.

Nara is a popular, easy day trip from Kyoto or Osaka, and it makes sense to go for the whole day. Then you can follow our recommended itinerary for a perfect day in the ancient capital. Odds are you can just follow the crowds over to the Nigatsudo. But on the off chance it’s not obvious where to go, bear in mind that the Nigatsudo is a good 10 minutes away from the Daibutsuden (Todai-ji covers a lot of ground).