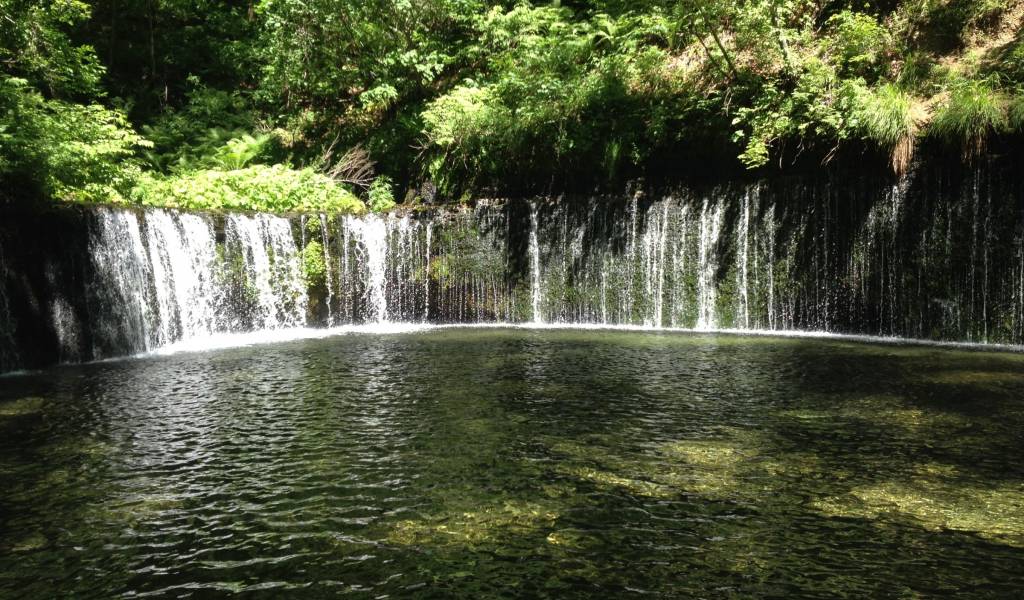 A Cheapo Stay in Karuizawa

For a small town in central Japan, Karuizawa is about as posh as you can get. This town at the foot of Mount Asama was made famous in the Meiji period as a summer escape for European traders and diplomats, and it still relies on this historic cachet to attract high- and high-ish rollers from Tokyo. And, at least in summer, it is a genuine relief from the stifling heat of Tokyo.

What to Do in Karuizawa

Karuizawa is a small, quaint town, with an abundance of bakeries and small shops. It’s seems almost a requirement for the shop name to end with kobo, meaning ‘workshop’. Apart from the interesting architecture and swanky shops, the main attraction for those of us who did not inherit oil fortunes is the abundant nature of the surrounding area.

About 10 minutes drive along Shiraito Highlandway toll road (the toll costs ¥300) to the north of Karuizawa is Shiraito Falls. Shiraito literally means ‘white threads’. While not spectacularly high or voluminous, the falls are 70 metres wide.

An interesting feature of the falls is that the water comes right out of the rock — there are no overground streams feeding the falls. The falls are a 5 minute walk from the road. Admission and parking are free.

If you don’t have a car, there is a bus that leaves from Karuizawa Station once or twice an hour. The cost of the bus is ¥710 each way and the trip takes about 25 minutes. The bus stop is ‘Shiraito no Taki’ although it should be quite obvious.

If you ever feel like going somewhere that doesn’t really feel like Japan, then this is it. Karuizawa Prince Shopping Plaza is a giant (and growing) outlet mall built around an artificial lake directly to the south of Karuizawa Station. While it says “outlet,” the prices are generally pretty standard. However, if you go during sale season, then you might get some good deals.

Hot springs in and near Karuizawa

The Tombo no Yu Onsen, or Dragonfly Onsen, is attached to a hotel, but open to visitors. In operation since 1914, this onsen offers indoor and outdoor hot spring baths at the foot of the mountain. To get there, you can catch a shuttle bus from Karuizawa Station’s south exit, and it’s only about 20 minutes walk from Naka-Karuizawa Station. If you’re on the public bus, it’s very close to the Hoshino Onsen Tombo-no-yu stop. Entrance is ¥1,300 for adults and ¥750 for kids.

Several hotels in the town, including the Kose Onsen Hotel, and the Shiotsubo Onsen Hotel, have on-site onsen that you can enjoy during your stay.

If you’re going from Tokyo for a few days, an excellent option is the JR Tokyo Wide Pass. This provides unlimited rail travel in the Kanto area for three consecutive days for 10,000yen. Kids cost 5,000yen. The pass includes the Shinkansen, and is available to anyone with a non-Japanese passport – not just foreign tourists.

Bus is also a viable option for transport from Tokyo at least, as the journey only takes about 2 hours and 50 minutes. See the bus times and prices.

The best way to get around once you’re there is to hire a car.

If you intend to look around the middle of Karuizawa first, you should delay picking up the car and grab a bicycle instead — parking costs about the same in Karuizawa as it does in Tokyo! On the main road to the north of the station there are numerous shops with rental bikes in front. The rates vary, but are generally around ¥1,000 for a 1 day hire. For pottering around in the center of the village, bikes are an excellent option.

Pro tip: it’s not that easy to find anywhere to eat outside Karuizawa, other than the odd convenience store, so be sure to have dinner in town.

Where to stay in Karuizawa

Although nowhere near the center (it’s in Kitakaruizawa which is about a 20 minute drive to the north of Karuizawa) Blueberry Youth Guesthouse has reasonably priced rooms. They do have a “joining fee” of ¥3,500 plus tax, but single rooms are available from ¥4,500 at off-peak times of the year.

Another rustic option is Koya Backpackers, located in the woods about five kilometers from the Karuizawa Prince Shopping Plaza. Koya Backpackers which has rooms starting at about ¥0/night.

Karuizawa also has a number of hotels, as you might expect of a tony mountain town, but they tend to be on the pricier side. One of the more reasonable options is Hotel Cypress Karuizawa, with room prices hovering at about ¥9,500 and upwards.

Another option is vacation rentals, with prices for private rooms starting at around ¥7,000 per person.