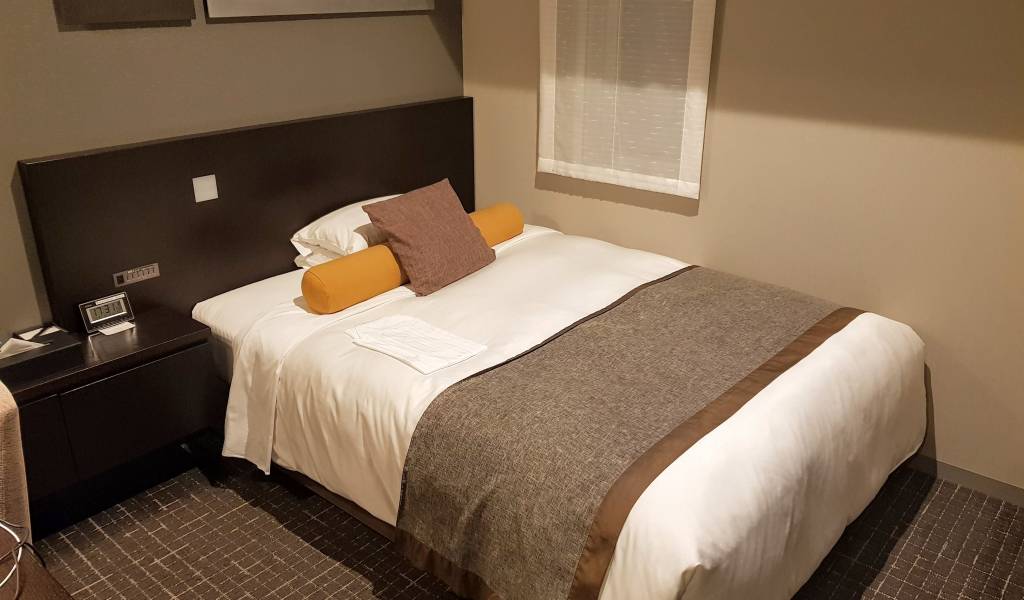 A Guide to Booking Hotels in Japan

OK, so the cheapest options for staying in Japan are hostels, capsule and love hotels and maybe an internet cafe. But sometimes you need the comfort and convenience of a hotel room with its own bed, door and bathroom. This doesn’t have to mean shelling out the big bucks, and we’ve got some tips for getting the best value out of your stay.

What you’re looking for are business hotels. These are standard, boxy places built for brief stays by salarymen but are also perfect for the tourist on the cheap. You’ll get a TV and amenities like slippers, toiletries and usually a fridge. Internet is generally of the wired kind, though more hotels are introducing wifi. Either way, it’ll be free. You won’t get a lot of space, but it’ll be clean, safe and private. Nine times out of 10 they’ll also be within a stone’s throw of a station.

Some names to look out for include Toyoko Inn, Sunroute, The B Hotels, Dormy Inn, JAL City and Super Hotel.

Toyoko Inns provide a free buffet breakfast, despite being one of the cheapest of the lot. Dormy Inns will often have an onsen bath somewhere in the building (try the roof) and offers free ramen before bed. The B chain has free coffee machines in the lobby. Super Hotels also provide free breakfast and some hotels have onsen-style baths, but this chain is probably the least geared up for non-Japanese speakers.

In terms of damage to your wallet, for a room in Tokyo you’re looking at standard room rates from as little as ¥7,300, or around ¥5,000 in quieter towns.

How to book a business hotel in Japan

It’s not necessarily as straightforward as you’d think, particularly if you’re trying to be smart and bag a deal in advance. A lot of the business hotel chains don’t take bookings more than three months ahead, which leads to the baffling situation where you’re on a travel booking website and half the hotels you’re interested in look like they’ve sold out.

They haven’t sold out, they just haven’t released the rooms yet. So rather than panic-booking something more expensive because you think you’re going to be sleeping on the street, experiment with dates that are closer and work out when the hotel releases its rooms.

Book direct with the hotel

Or maybe avoid travel booking sites altogether. We randomly chose the Toyoko Inn in Kanda Akihabara and picked a random day a couple of months hence. The hotel is offering single rooms for ¥7,344 (including a ¥300 direct booking discount) on its website, but a booking website is offering the same room on the same day for around ¥9,000.

Sunroute also claims that booking direct via the website is always cheapest, and we’ve not seen anything yet to doubt them. In fact, we’ve seen rooms at double the price on some of the big booking websites.

Side note: sometimes the Japanese booking system these hotels use is truly awful, and refuses to spit out a room at all. Ever. We don’t have a workaround for this but rest assured that it’s not you, it’s them.

Although sometimes booking sites are handy

If you look at the website of APA hotels it seems like an expensive option, but booking websites always seem to have heavily discounted rooms available. APA is nice, but in our opinion not ¥6,000 a night nicer than, say, a B or Sunroute so look for a deal before booking direct.

It pays to double check, is what we’re saying here.

By going direct you can also take advantage of earlybird deals. For example, The B in Ikebukuro has rooms for as little as ¥5,902 a night if you book a couple of months ahead.

JAL City hotels have a range of earlybird discounts depending on the hotel and whether you book 14, 28 or 60 days in advance.

Sunroute does small discounts of a couple of hundred yen if you book 3, 14 or 28 days in advance. (We’d advise booking Sunroute for travel outside of Tokyo, as prices have gone up a fair bit in the last few years and there are other hotels that provide the same for less.)

Toyoko Inn Club Card Members (¥1,500) can book rooms up to six months in advance, the lucky things. They also get a room discount of a few hundred yen per night.

Sunroute’s loyalty scheme is free to join and gets you 10%-20% off stays.

B Hotel’s Win Program nets you 5% off your room rate as well as accruing points.

You have to sign up for these cards at the front desk when you check in.

Avoid peak seasons, like new year, Golden Week and cherry blossom season as prices go up and hotels get booked out.

Weekends can also prove tricky if you’re in a smaller town popular with tourists. Kyoto on a Saturday is just ouch. If you really can’t avoid being in a hotspot on a Friday or Saturday night, work out when your hotel of choice releases rooms for your dates and pounce. Tokyo has a weekend premium too, but the city’s big enough that you’ll generally find something without too much struggle.

A fancy hotel room on the cheap

If you want a bit more luxury but lack the money to pay for it we’ve got some more tips here. You should also check out that article for more information on booking websites that specialize in Japan.

For some cheapo-approved options, check out our accommodation section.