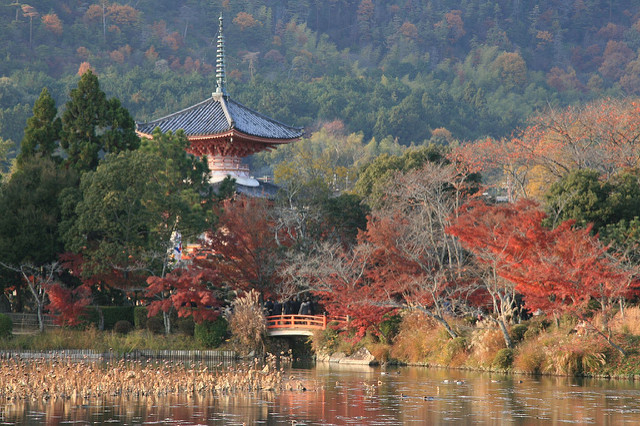 The Moon of Daikakuji

Kyoto is the city of temples, and without a doubt you will end up visiting more than you can count. Yet Daikakuji is one of those lesser famous temples that has a mysterious appeal tempting you to pay it a visit.

Daikakuji is what one would consider “slightly off the beaten path” as although it is located near Kyoto’s popular Arashiyama district it hardly attracts any visitors outside the autumn and spring season. When you start writing about the history of a temple in Kyoto there tends to be one phrase that always comes up: “the detached palace of Emperor [insert name]” and Daikakuji is no different. Built in the 9th century the temple first served as the detached palace of Emperor Saga, whose main legacy interestingly enough was a ban on the consumption of meat which changed the diet of the Japanese until this very day.

About thirty years after the Emperor’s death the palace was granted to the Shingon Buddhist sect (which he had been a prominent supporter of during his lifetime) to be converted into a temple. Since then the temple has built up quite a unique history as not only accommodating several retired Emperors but also hosting peace talks during the Nanboku-cho period when Japan was divided by civil war.

Daikakuji is also featured in the famous Tale of Genji, the first novel in Japanese literature, and Emperor Saga’s grandson seems to have been the author’s source of inspiration for the story’s protagonist. Apart from the Tale of Genji, the temple’s Osawa garden has also been featured in many classic poetry works, such as that of Ki no Tomonori describing island of chrysanthemums found in the pond.

I had thought that here
only one chrysanthemum can grow.
Who therefore has planted
the other in the depths
of the pond of Osawa?

While strolling around the garden you may notice several boats docked along its side. The reason for this is that the garden has been designed to mimic the Dongting Lake in China according to the architectural style known as chisen-shuyu, which indicates that it is meant to be viewed from a boat. When Daikakuji still functioned as a palace, the Emperor held several events to view the moon while gliding on the water in a boat.

Each year on the first weekend of September, the temple stills organizes a moon-viewing event featuring traditional ceremonies and dance from around 17:00 to 19:00. There is a minor admission fee of ¥500 to enter. And for those who truly want to make this a unique experience a ticket to ride on one of the boats only costs another ¥1,000. Please do note however that the tickets for the boat ride are sold at the main gate in advance. In spring the garden is another popular spots in Kyoto for cherry blossom viewing.

Daikakuji is about a 15-minute walk away from JR Saga-Arashiyama Station on the JR Sagano Line, or 25 minute if you take the Randen to Keifuku Arashiyama Station. Kyoto city buses 28 and 91 leaving from these stations also pass Daikakuji. The temple is throughout the year between 9:00 and 17:00 for ¥500 or ¥800 if you would also like to visit the garden. For an additional ¥500 there is also an English audio guide that guides you around the precinct in about 45 minutes.