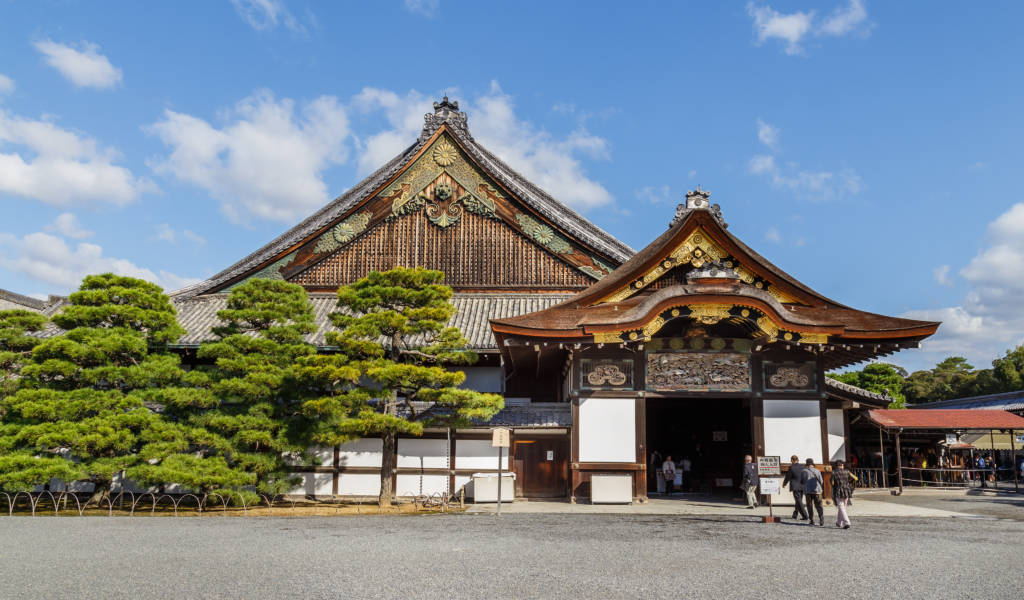 In 1601, when the time of the warring states came to an end as the Tokugawa shogunate united all of Japan under its control on behalf of the Emperor, Shogun Tokugawa Ieyasu ordered the construction of Nijo Castle in the imperial capital of Kyoto. With its broad moat and large white walls at the heart of the city, Nijo Castle is one of Kyoto’s most impressive buildings and a must-see for anyone visiting the ancient capital.

Nijo Castle did not primarily serve a defensive purpose, rather it was a symbol of the shogunate’s might and aimed to impress those who held an audience with the shogun. With a time of immense upheaval just coming to an end, the shogun was very cautious of any signs of treachery and made sure the floors were constructed according to the “nightingale”-style which makes them squeak when stepped on as a kind of ancient alarm system, and equipped dozens of rooms with hidden guards.(As you tour through the castle today, your footsteps will still make the nightingale song, so you can experience what it would be like to be an old-timey intruder.) Nonetheless, the shogun spent most of his time in Edo, present-day Tokyo, as his seat of power and the castle would lay empty for almost 200 years until the last shogun took up residence there before Emperor Meiji abolished the shogunate completely in 1868.

Passing through the vast gate you will most likely first walk towards the grove of plum and cherry trees in the far left corner of the castle grounds. It may not come to a surprise that when hanami (cherry-blossom viewing) season starts the castle becomes one of the finest sights in Kyoto and its free public openings for the nighttime light-up attracts countless of visitors. During these nighttime openings, light shows and  traditional musical arts are performed in various sections of the castle grounds making the visit far more than “just” hanami.

Walking along the inner moat the sight of the Ninomaru Palace’s garden easily attracts your eyes. Said to be designed by Kobori Enshū, a tea master and landscape architect of the early Edo period, the garden truly is a place of tranquillity and peace. The tea house offers delicious green tea as well as pastries to enjoy while you take in its beautiful surroundings.

The Ninomaru Palace itself was not constructed at the same time as the castle, but added in 1626 for the imperial visit of Emperor Go-Mizuno. Although quite imposing on its own due to its particular architectural style composing of five interconnected buildings, its interior is richly decorated and shows several fine masterpieces, such as the painted screens of the main chambers painted by Kano school artists portraying flora and fauna in deep colours. The main chambers served as the audience room for the shogun to meet with his high-ranking warlords and one must admit the room, as Nijo Castle itself, clearly serves to impress. Looking closely at the manner in which Nijo Castle is built, you may notice a sense of progression flowing from the gates and thresholds as well as orientation towards the garden, grove and pond. This architectural style, named shinden, can be found in many Heian-era mansions.

It is somewhat strange to realize that throughout its history this marbled architecture has known so much neglect and ill-care. As mentioned earlier it was abandoned for 200 years and after the final shogun passed away it served as Kyoto’s prefectural office for two decades during which it was mostly neglected. Only just before the Second World War, in 1939, the city started restoring the castle to its best attempts, yet numerous buildings had already been lost included the castle keep itself. Today Nijo-jo once again serves to impress any of its visitors and is a shining example of Kyoto’s rich history.

Kyoto’s city buses 9, 50 and 101 stop at “Nijojo-mae”, which is to the right of the castle’s main gate. You can also access Nijo Castle by taking the Tozai subway line to its stop at Nijojomae. The castle gates open every day at 8:35 to close again at 17:00 except on Tuesdays in December, January, July and August on which the castle remains closed. A minor admission fee of 600 yen for adults or a discounted fee for high school and elementary students is requested before passing through the main gate. You can book tickets for a tour of Nijo Castle online.