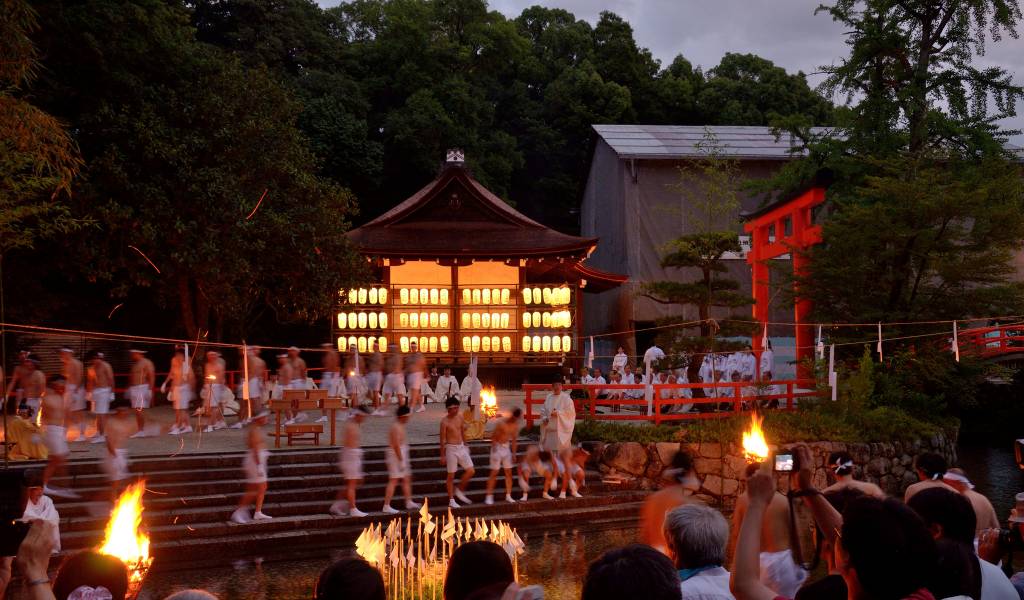 On August 6th at one of Japan’s most ancient Shinto shrines tucked away on the northern side of central Kyoto, 60 young men prepare for a sacred struggle.

According to a more traditional timeline, August 6th marks the end of summer. On this day, locals bid farewell to the dangerously hot season at the Yatori-no Shinji Festival.

During the festival, 50 arrow-like talisman are placed at the center of the Mitarashi Pond within the shrine’s precinct. When the ceremony starts around 7pm, everyone’s eyes are fixed at the loincloth-donning young men as they walk towards the edge of the pond.

Nervously the men are seated on the pond’s steps as the Shinto priests starts chanting their prayers from sacred texts and purify the altar. As soon as dusk passes, fires are lit around the pond drawing your eyes towards the men.

Then, the signal is given! All 60 men rush towards the center of the pond to take their prize, the sacred arrows that ward off evil and ensure good health for the year to come. As priests shroud them in hito-gatta, prayer papers shaped like human figurines, only 50 men will be able to take hold of the prize while the others will be left to fight off evil on their own. So ends this year’s summer at Kyoto’s Shimogamo Shrine.

Ok, so it is not really a struggle but more of a sprint, but you get the sense of sheer intensity at that moment. The festival is a unique experience that makes for a great evening, as well as many memorable pictures and stories.

The shrine, officially known as Kamo-mioya-jinja, was founded in the 6th century well before Kyoto became the capital in 794. It is part of two shrines known as Kamo-jinja, named after the river Kamo that runs through Kyoto. The other shrine is Kamigamo located further north along the river. When you enter the precinct from the point where the river Kamo splits off to the Takona river, you enter the shrine’s Tadasu-no-mori forests providing you with a nice cool escape from Kansai’s bathing summer sun.

On your left there is a small shrine named Kawai-Jinja. Although its name is one ‘i’ short of being kawaii (cute), it is somewhat related since it is dedicated to women’s beauty, childbirth and finding that one true love. Kawai Shrine is dedicated to women’s guardian spirit, Tamayorihime, known for her endless beauty since ancient times. The shrine offers unique items shaped like a traditional Japanese mirror on which you draw your face to communicate your prayers to the spirit. Some worshipers draw their image with their make-up as they believe it helps guard their true beauty beneath.

Heading a few minutes further through the forest, Shimogama Shrine itself appears in the distance. The shrine is dedicated to a number of deities, but most importantly the God of Marriage at the complex Aioi-sha Shrine right beside its entrance gate. Within the grounds you may notice several sacred trees, among which two are entwined. Legend has it that these trees, known as the Renri-no-Sakaki, are eternally bound. Even if one were to die, another will appear.

The complex itself is quite large, covering over 60 buildings, but you will only be able to see those facing the central courtyard and those surrounding the pond. The main shrine was reconstructed in 1863, but more importantly is designated as National Treasure and a UNESCO World Heritage Site since its divine beauty continues to persist throughout the centuries.

Shimogamo is easily accessed by both train and bus from almost anywhere in Kyoto. By train you will want to head to Keihan Demachiyanagi Station, a 10-minute walk from the shrine. By bus, you can take city bus #205 to Shimogamo Jinja-mae or #102 just a bit further from Demachiyanagi Station. Entrance to the precinct is entirely free, but if you want to visit the treasure chamber than there is a minor fee of ¥500 or a discounted fee for elementary school students and younger for ¥250.

The precinct is generally open from 6am to 5pm, but during the festival which starts around 19:00 it is open a bit longer. It is best to arrive early since there are not that many viewing spots towards the pond and the event tends to draw large crowds.