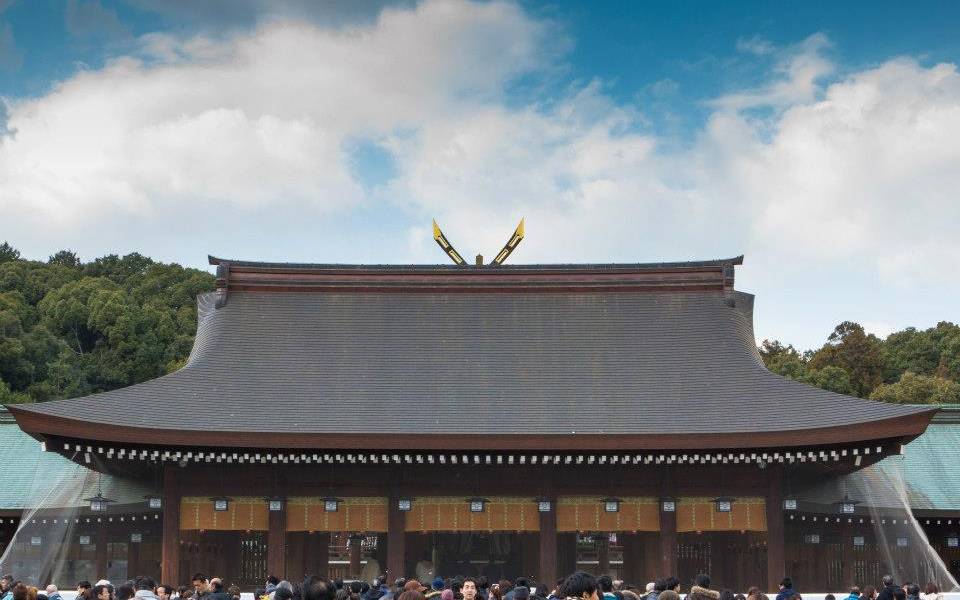 Kashihara Jingu venerates the spirit of the first emperor of Japan, who reigned at the edge of myth and history. Located due south of Kyoto in Nara Prefecture, the shrine sits at the center of the ancient kingdom of Yamato, which is Japan’s traditional heartland. While a late addition to the constellation of major Shinto shrines, the story and conflicts the site represents make it a destination worth visiting for those traveling to or living in the Kansai area.

Emperor Jimmu and the Founding of Japan

Unlike most stories, this one begins in the middle. The Kojiki and Nihon Shoki, the oldest records of ancient Japanese history, both relate the story of Jimmu, whose life straddled the divide between the mythical Age of Gods and the current historical period. In fact, his ascension to the throne marks the transition point from the old age to the current one. He was born on the island of Kyushu and was said to be directly descended from Amaterasu, the Sun Goddess. Amaterasu is the supreme deity in Shinto’s pantheon of gods, and her descendants were charged with bringing order to the world of mortals.

Jimmu’s family felt this divine imperative, and they decided to leave their isolated area at the western edge of Japan’s main islands so they could rule from a more central location. They set off towards the east and eventually arrived at Naniwa, which would change its name to Osaka in the centuries that followed. Here they waged an unsuccessful battle against a local chieftain, and Jimmu’s older brother was killed. Jimmu realized that their failure was due to the fact that they were marching east against the sun. To remedy this, they sailed around the Kii Peninsula and landed in Kumano. From there they marched westward with the sun, their patron goddess, at their backs, and they found success in their future battles. Having vanquished his enemies, Jimmu created the kingdom of Yamato, which he ruled from a palace built in the region of Kashihara. While historical discrepancies in the timeline exist, the narrative is that the imperial line has gone unbroken since Emperor Jimmu founded his kingdom on February 11, 660 BCE.

The imperial line has perhaps gone unbroken, but by 1185 CE de facto rule of the country had passed to the warrior class, though the imperial family maintained a ceremonial position. After much turmoil in the mid-19th century, however, Emperor Meiji assumed the throne in 1868 and reasserted imperial control over the country. To help maintain that control, Shinto’s disparate shrines and practices were forged into a single entity that became known as State Shinto. The national foundation story embodied by Emperor Jimmu was in an important part of that effort, and Kashihara Jingu was consecrated in 1889 on the spot that it is believed Jimmu was declared emperor. After the shrine’s opening, yearly events were held on February 11th to celebrate the founding of the nation. These events were halted in 1948 by the Allied forces that occupied Japan after the Second World War, but they were resumed in 1966 and today draw large numbers of uyoku, which are right wing nationalists.

Kashihara Shrine is approximately an hour south of Kyoto on the Kintetsu line. The shrine is a ten-minute walk from Kashiharajingumae Station, and is accessed by a wide road that runs directly from the station. The road is lined with a few restaurants and cafes, though the tourist infrastructure is not as built up as in some other locations. The shrine is set in a wooded area, and a broad path composed of flagstones and lined by gravel leads up to the main area. At the end of this avenue lies a pond to the left and the shrine to the right. The pond has a path around it that makes for a pleasant walk, and there are ducks that will be happy for any bread a passerby happens to drop. The shrine sits off to the right and is free to enter. Though younger than many other shrines at only 125 years old, the architecture mimics the designs of much older locations, giving the spot a substantial feel.

While slightly off the beaten path, Kashihara Shrine offers someone looking to explore a less traveled side of Japan an amazing opportunity to visit the shrine of one of the oldest semi-historical figures in Japan. Jimmu’s story alone makes the shrine worthy of attention, but added to that is the role the shrine played in establishing State Shinto and imperial rule in the late 19th and early 20th centuries, a role it never relinquished as the shrine still draws nationalists in the present day. While not as famous as other locations, the shrine should be given serious consideration when by anyone visiting the Kansai area.