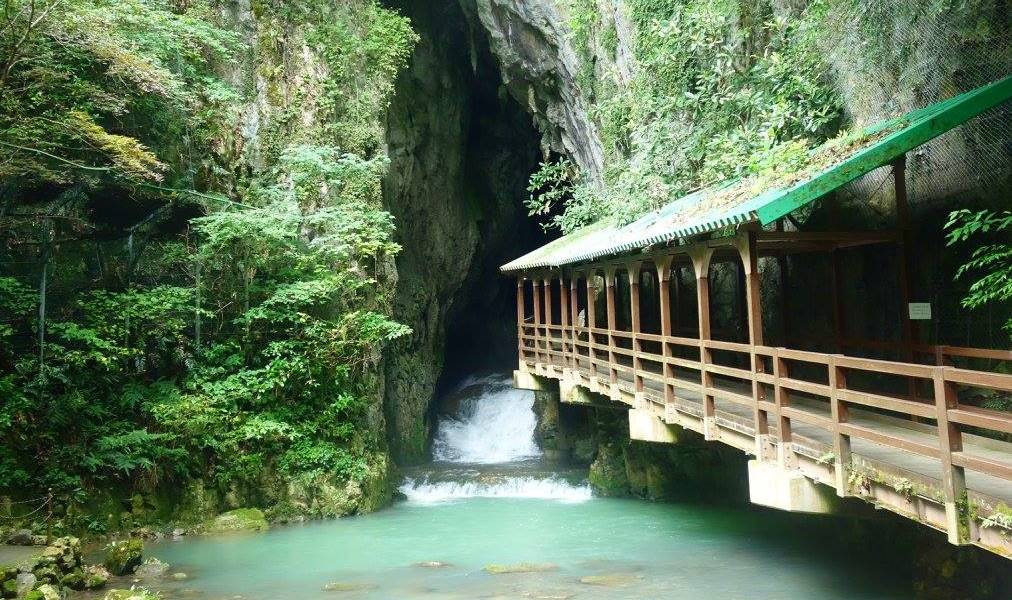 Caves. Not everyone’s a fan. If you are though, Yamaguchi boasts the longest in Japan, and it’s quite spectacular. The cave scene might be a bit of an underground movement, but with spelunking an option, the depths people will go to to reach them are ever increasing.

Akiyoshido Cave is underneath the Akiyoshidai Quasi-National Park, which is a strange landscape of almost artificial looking rounded hills with protruding white limestone rocks. When the acid in rainwater eats away at the limestone, the giant pits are created which eventually led to the cave formation and the amazing stalactites and stalagmites within. You can visit the observatory and enjoy the views, follow some of the many hiking trails or attend in February when they burn the mountainside to control plant growth over a period of three hours, with the help of 1000 local volunteers.

This all feels like a warm-up to the draw of the dark caves below. The cave was named by Emperor Akihito in 1926 when he visited and has since been declared a Special Natural Monument. It reaches heights of over 80 m and is about 10 km long. As the water drips down around you, the transformation of the cave continues eerily. There are six types of cave bats and other small wandering creatures you can either hope to see or actively avoid.

Both entrances have bus access and visitor centers, although personally it was nicer to follow the descending path as you exit through the lovely bridged area into a forest (very nice after a stretch too long in a cave).

From the Akiyoshido entrance, approximately one-third of the cave can be toured by wheelchair.

Word of warning: Take a jacket as it is always about 17 degrees Celcius (62 Farenheit) in the cave and if you’re taking your time it can get chilly.

Once you’re in, there are certain highlighted spots along the trail including the Golden Pillar, Hundred Saucers and the Thousand Rice Fields. There are 23 other creatively names sites to see which are less impressive, but we suggest looking out for the Rain Palace, Jellyfish Climbing a Waterfall, and The Dragon’s Secret Passage. There is even a small extra trail you can climb for ¥300 which takes you higher up, with a great view of the caves.

Near all of the main sites are speakers where you can select your language and listen to a short description of the site you are near, as it is broadcast across the cave. 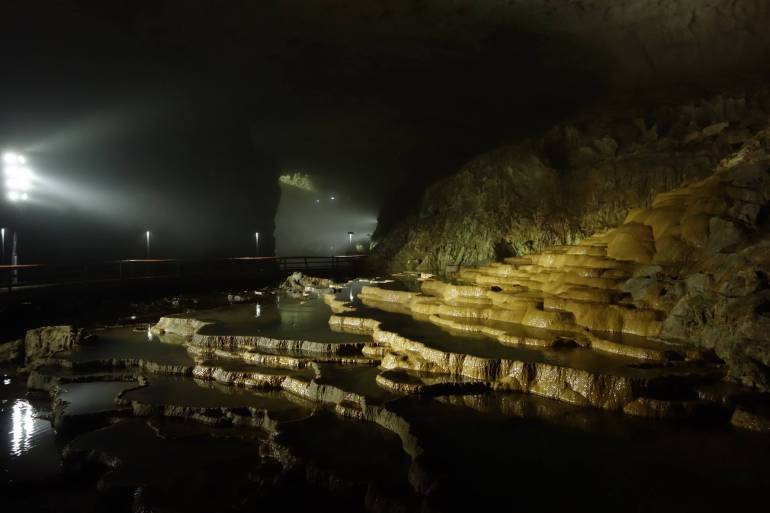 The Akiyoshido exit/entrance is lovely, and if you follow the path you’ll find yourself in a quiet, narrow street lined with souvenir shops.

If you can’t get enough of caves, there are two more located in the Quasi-National Park. The Taishodo Cave boasts sights such as Entrance to Hell and the Cattle Hiding Cave, both of which you can explore. It is a vertical lime cavern with an upper level (Paradise Plaza) and a lower level, simply called Hell.

If you make it out alive, you can venture to Kagekiyodo, a limestone cavern in which Heike warlord Taira no Kagekiyo hid after losing a battle. The ceilings and walls are considered particularly beautiful as they are covered with coral fossils. You will be given a helmet and head torch and you can explore the cave yourself including a “hands-on” route where you can go exploring with a rental kit. These caves are also accessible from Shin-Yamaguchi Station, but transport in between is not clarified.

Open with Maps
Akiyoshido Cave and Akiyoshidai Quasi-National Park
1,200 yen
Akiyoshi, Shuho-cho, Mine
Yamaguchi
Official Website
0837-62-0304
8:30 am to 17:30 (until 16:30 from December through February)
Written by: Lily Crossley-Baxter
Filed under: Things to Do
Tags:
Sharing