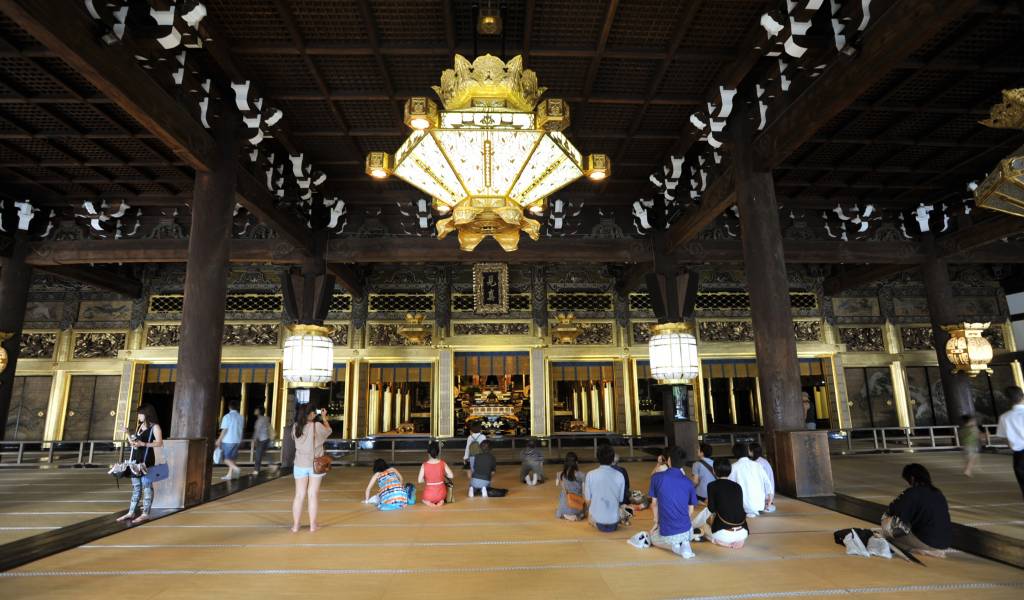 Pic: Kiwi He used under CC

Visiting the Heart of Japanese Buddhism, For Free

Buddhist temples in Japan always tend to leave quite an impression. They house some of the finest traditional art and architecture in the world and are maintained with the greatest care. Yet there is a catch for us cheapos: they tend to always ask for an admission fee. But what if I told you you can visit Japan’s most important Buddhist temples for free?

The temples I am referring to are the two Shin Buddhist Honganji temples just around the corner of Kyoto Station.

Shin Buddhism was founded by Shinran around the early 13th century. He believed the Buddha Amida would aid anyone who called him for help, thus his teaching is simply to trust that vow. Today, Shin Buddhism is the most common form of Buddhism in Japan and Nishi Honganji is its main temple.

Nishi Honganji as such caries both religious and historical value in Japanese culture, and its architecture is equally of great importance. Its main hall spans 62 meters in length and is 48 meters wide houses the temple’s altar devoted to Shinran.

Inside, there is a small wooden statue said to be carved Shinran himself and its varnish was mixed with his ashes after his death. Above it a tablet reads “see truth” in Kanji, an honorary title bestowed upon Shinran by Emperor Meiji.

Another architectural feature to look at is the Karamon Gate which is believed to have been part of Fushimi Castle to the south of Kyoto. Also known as the “Twilight Gate”, Karamon is ordained in colored carvings that could easily let you lose track of time by admiring them.

Higashi Honganji is the youngest of the two temples, dating only seven years after Nishi Honganji. The temple was established by decree of the shogun due to the sheer power the Shin sect had acquired.

Its grand wooden main hall—Goeido—is devoted to the founder of the Otani-ha branch of Shin Buddhism. It’s 76 meters in length and 58 meters in width and attracts your attention as you enter through the temple’s gate. Covered with almost 200,000 handmade wooden roof tiles, the main hall is one of the largest wooden structures in the world.

Like Nishi Honganji, very few buildings in Higashi Honganji are original as they too were destroyed multiple times throughout its history. Both the Goeido and the neighboring Amidado Hall have been renovated recently. An interesting fact in the last reconstruction during the Meiji Era is that at the time ropes were unable to lift the heavy timber beams, so female followers of the sect donated their hair to make ropes that could.

The orange trees of Shoseien

For those who do not mind spending a few pennies, the temple harbors a ‘hidden’ secret just around the corner. Shoseien, which is more commonly known as Kikokutei Garden after the trifoliate orange trees that surround it, was built in the early days of Higashi as a retreat for its head priest. The small pond in the garden and surrounding trees especially stand out in autumn when the leaves start changing their colors. Following the windy pathways across small bridges leading to small tea ceremony houses, Shoseien is quite a treat to end your visit to Honganji.

Both Higashi and Nishi Honganji are a few minutes walk from JR Kyoto Station, but most buses also make their first stop in front of the entrances. While they are open throughout the year, the temples’ opening hours may be a bit confusing though. Nishi Honganji opens at 5:30am until 5pm from November to February, but closes half an hour later from May to August. Higashi Honganji on the other hand opens around 5:50am to 5:30pm from March to October while from November to February the temple opens around 6:20am to 5:30pm.

The garden’s opening hours are a lot less confusing, from March to October opening hours are 9am to 5pm. In the winter months it closes an hour earlier. Since this is the only part of the temple complex where there is a fee, being 500 yen, admission ends 30 minutes before closing time.