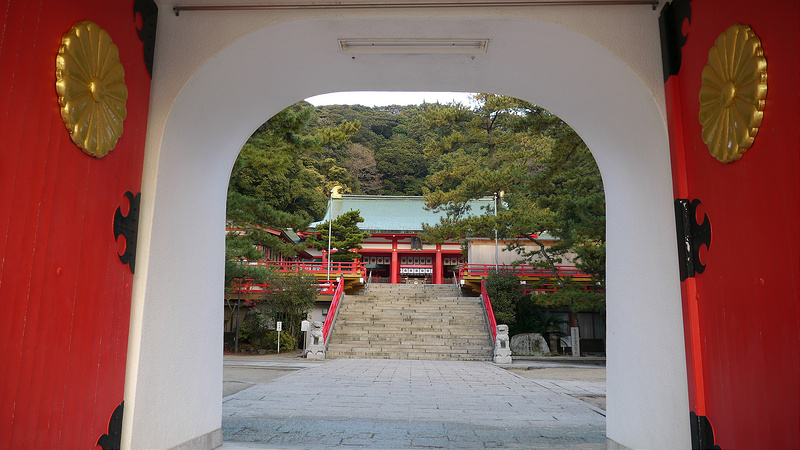 With Shimonoseki’s role in the fugu (puffer fish) trade well and truly covered in the first part of this article, it’s time to step into a darker side of the city.

While the waterside location brought it plenty of fish, it also brought its fair share of problems. The strategic location  lead to Shimonoseki being the sight of numerous battles which went on to shape Japan. The 1185 battle of Dan-no-Ura lead to the formation of the Kamakura Shogunate. And 700 years later, the Choshu samurai clan closed the Kanmon Straits to foreign shipping in 1863—leading to violent attacks to reopen them. Once you’ve sampled the fish and risked death (maybe), why not delve into the depths of a blood-mired history?

Explore the dark past of Akama Jingu

Fronted by a bright red gate, it is hard to miss—but behind the impressive structures and an open courtyard, Akama Shrine holds a dark and sad past.

Sacred to the spirit of Antoku, a child emperor who died during the the Battle of Dan-no-Ura in 1185, it was awarded the highest ranking of Kanpei-taisha in 1940 and became Akama Jingu. Our guide, who was a descendant of the losing Heike clan, explained that the young emperor was drowned in the straits by his grandmother, who dived in after telling him they would reach a new palace under water. Having lost the battle, she knew the fate that awaited the child, and did what she could to protect him. The colors and style of the gate are said to be inspired by Ryūgū-jō, the mythical underwater palace of Ryūjin, the dragon god of the sea, thought to be the palace of which the child’s grandmother described.

Once inside the temple precincts, you can see the Shichimori-zuka—the seven mounds that are scared to the Heike warriors. Tucked around a corner, you’ll find Hoichi’s shrine—a small and beautiful sight, with a disturbing legend behind it.

A talented lute player, Hoichi was a blind monk who was particularly skilled at playing The Tale of the Heike, which detailed Emperor Antoku’s death, and was often asked to perform it, to great praise. However, one night he was found playing to an empty graveyard having been bewitched by evil spirits—the audience he could hear applauding him. To render him invisible, his friend adorned him in protective charms but forgot his ears—which were torn off when seen by the angered spirit, as evidence that was all they could find. Hoichi was saved, and recovered to become a famous musician—the tale of Hoichi the Earless by Irish-born writer Lafcadio Hearn introduced the horrors of the war to the public for the first time.

Aside form all the darkness, it is a beautiful temple with great views of the bay!

Step back into Britain

The Shimonoseki Former British Consulate was opened in 1901 in a small traditional Japanese store, replaced in 1906 with the new building.

It was used until 1940 and closed due to the worsening relations between Japan and Britain. It has since been a police station and an archaeological museum. In fact, our guide remembered being terrified to go near the building as a child, as it was believed to have the ashes of dead people in jars. None of that now though, it has been beautifully restored and offers a tearoom and pub, a nice courtyard and small museum about the building’s history. Just around the corner from the Kamayama Hachimangu shrine, in the direction of the station.

Opening hours:  9am-5pm (until 10pm for the tearoom, pub and courtyard)

Pop over to Kyushu!

The Kanmon Bridge may be what first catches your eye, but underground, there is a pedestrian walking tunnel you can follow or up above is a cable car to the best view of the city!

The 780-meter-long path is pretty standard and is used by commuters and visitors alike, but since there is a border line painted at the crossing point you can have fun hopping between islands to your heart’s content. You take a lift down (after paying the discretionary 20 yen donation—thanks, Japan) and can walk to the line, or over into unknown lands (well, it sounds more mysterious)—and come back again.

Just across the road, over by the water’s edge you can see the commemorative statues of some of the biggest battles in the city’s history. The striking warriors fighting against the straits represent the Genji and Heike clan in the Dan-no-Ura battle. Nearby, the cannons serve as a reminder of the Battle of the Shimonoseki Straits and the struggles for the development of modern Japan.

If you would rather see things from above (and admittedly the tunnel view isn’t great) you can catch the Hinoyama ropeway up to the top of Mount Hinoyama in Sentonaikai National Park. It has a revolving observation restaurant, shops and a non-rotating observation deck too. The view is stunning, and at night is known as the ‘Ten-million-dollar view’ as you can see across the bay and far into the distance.

And in case you missed the first half—we have a guide on the fugu hotspots of Shimonoseki too—since it’s the puffer fish capital of the world!

These sights are all within walking distance, but there is also a bus route that will drop you off along the way. If you are going to combine the places from both Shimonoseki articles, it might be a good option to get the bus to the Hinoyama Ropeway bus top, (15 minutes, 290 yen from the station) and work your way back.

You can also purchase a Kaikyo Sansaku one-day bus ticket for 360 yen which will take you between Shimonoseki Station and Karato Market (perfect if you want to start here and head to the bridge last). There are great city maps available in English so you can plan which route you prefer!