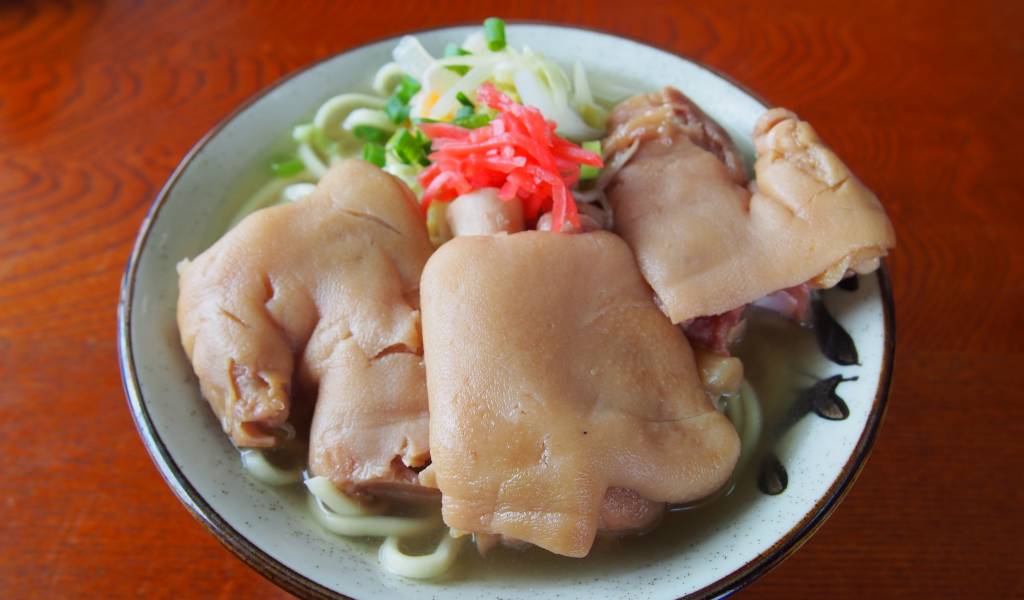 Eating in Okinawa: What to Try and How to Eat it

When it comes to culture, climate and scenery, the contrast between Mainland Japan and Okinawa is clear from the second you arrive.

That goes for cuisine too—so if you’ve prepared yourself for the usual Japanese foods, you’re in for a surprise. If you’re anything like me, you’ll want to know what something is and how you’re supposed to eat it long before it’s placed expectantly on your table. You’ve come to the right place for the full dish on Okinawan food!

Okinawa’s signature dish, chanpurū is so popular you’ll find some version of it in almost any Okinawan izakaya (Japanese-style pub) or restaurant. The dish consists of stir-fried eggs and tofu, usually with beansprouts and other veggies. Every eatery has its own variations and toppings, but the most popular are goya (see below) and SPAM, which became an Okinawan favorite after American GIs distributed it as a cheap meat substitute.

A renowned Okinawan powerhouse of a food, goya (sometimes known as bitter melon) has a wide range of alleged health benefits. The bitter taste is no joke. I can’t say I find it especially delicious, but it’s interesting and I don’t struggle to eat it. The most accessible way to try it is probably as an ingredient in chanpurū, but you’ll see it in many forms throughout Okinawa.

Rafute is pork belly cut into cubes and cooked slowly in a mix of soy sauce, sugar and often awamori (an Okinawan liquor—we’ll get to that). That explanation fails to capture quite how delicious rafute is. The slow cooking process makes for a melt-in-your-mouth flavor explosion. A portion is usually a couple of pieces, so order accordingly if you’re in a big group. Sometimes you’ll get a small smear of mustard to the side of the bowl. Don’t get cocky with it—it’s pretty intense!

If you’re squeamish about bones or strange textures like skin, these pigs’ feet are not for you. They’re stewed in a sweet, salty broth until the collagen starts to dissolve and the meat is practically falling off the bone. Best enjoyed as a soup to share, alongside veggies such as daikon, carrots and kombu (dried kelp).

Described as shallots, these are a lot smaller and milder than you might be used to. They’re often served lightly pickled or fried and topped with katsuobushi (bonito flakes) as a snack. Some people pour on a little soy sauce for extra flavor. Try not to go too wild—it’s easy to drown out the taste!

Sukugarasu is more or less exactly what it looks like—tiny fish, served on a cube of tofu. The saltiness of the fish goes well with the otherwise bland tofu. These are best eaten in one bite, as the tofu tends to crumble if you mess around too much with it.

Okinawa’s iconic alcoholic spirit, awamori is (usually) clear and always fermented using rice. At between 30-40% alcohol it’s reasonably strong, so a small bucket of ice and a jug of water to mix it with are normal. I’m generally a little intimidated to try drinks that come with additional steps, but this is fairly straightforward—just add the ice and water to suit your taste. If that’s not your style, it’s also used in mixed drinks in the same way shochu is.

This purple potato variant is known for its sweet taste and vivid purple flesh. It’s another alleged health food—but as if to offset any health benefits, you’ll generally find them served either in sweet desserts or fried. They’re denser and chewier than your average potato, and delicious sprinkled with a little salt.

Apparently created for American military personnel, this very rough approximation of the taco has become a mainstay of roadside cafes and diners. The combination of taco meat, American cheese, lettuce, salsa and rice makes for satisfying lunch. If you’re lucky you might get a couple of tortilla chips too. Ditch the chopsticks, use a spoon.

Something for more adventurous diners, this fermented tofu product is served in a vivid pink, awamori-laced pool. Don’t be tempted to one-shot this like some other tofu dishes—it’s strong stuff. Expect to see toothpick-like sticks, which you can use to slice off and skewer a small piece at a time.

Commonly called sea grapes or green caviar, these clusters of algae are popular for their unique popping texture. They’re tasty on their own, but they’re usually served with a thin vinegar or soy-based sauce. Pick up a bunch with your chopsticks, dip it, and eat the whole thing, vine and all.

Soba in Okinawa is very different to its mainland cousin. Using wheat-flour noodles instead of buckwheat, Okinawa soba more closely resembles some kind of ramen/udon mashup. The broths and toppings vary between shops, especially between islands. Soki (boneless pork ribs), pork belly and pigs’ feet are all popular.

See that condiment bottle with little peppers in it? That’s koregusu—an Okinawan chili sauce. The liquid is awamori, not vinegar as I initially expected. It’s a little spicy and a lot boozy. A splash adds some warmth to soba, chanpurū, or pretty much anything else.

Pigs’ ears. The final proof that no part of the pig goes uneaten in Okinawa. A popular drinking snack, the cartilage in mimiga makes for an interesting combination of crunchy and soft textures.

Often known as Okinawan doughnuts, these guys are little cakey balls of dough. The simplest coating is sugar, but there are more elaborate versions. Ideally, you want them fresh—slightly crispy exterior with a soft interior. Pre-prepared ones can be closer to stale pound cake.

No guide to Okinawan cuisine would be complete without mentioning Orion beer. While the rest of the country chugs Asahi, Sapporo, Ebisu and Kirin, almost every Okinawan bar stocks Orion. These days you’ll occasionally see it in Mainland Japan distributed by Asahi, but it really is best enjoyed in Okinawa alongside any of the above dishes!