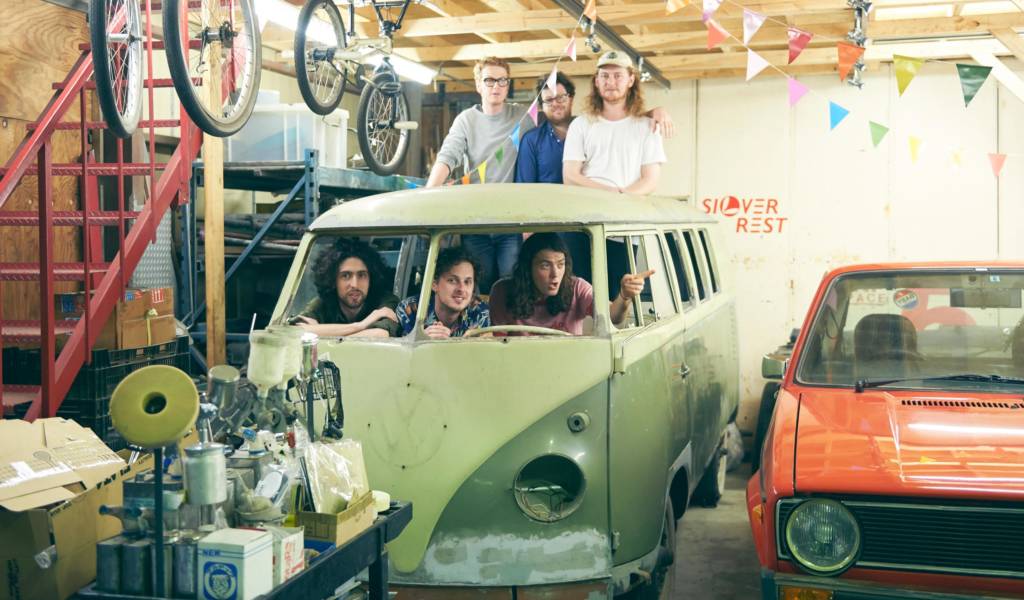 The whole cliché of being “big in Japan” is a bit of a worn-out old trope these days. In a time of music streaming and the fragmentation of the music industry, becoming a full-time professional rockstar is not really the most stable career option—but, hell, if you love to party and play it’s a whole lot of fun trying.

We spoke with Marty Holoubek, an Aussie musician now living in Tokyo, and member of The Lagerphones, a six-piece jazz collective who are about to make their way back to Japan for their fourth tour in about as many years.

Being an incredibly talented, but rather niche band, The Lagerphones have always had to be pretty savvy when it comes to traveling on the cheap and knowing where to go and how to do it right. After a few trips (and plenty of mistake) now under their belt plus a whole community of Japanese fans, they’re now in a position where touring Japan is as familiar as doing the pub circuit back home.

Not a lot of people are lucky enough to have done what The Lagerphones have, so with the guidance of Marty, a man who’s now done it four times over, here’s what you need to know, plan and do when touring Japan.

After being here to play with The Lagerphones (and multiple times outside of that individually), Marty and the rest of the band have a lot in the Japan live scene intel bank. Marty’s strongest piece of advice is to:

“Pick your venues well! Depending on your genre, size of the band, level of popularity portability, or whatever other extraneous factors you may have, the venue choice is critical. If you’re a band that needs backline, make sure the venue you play has backline. If you’ve never been to Japan before and you don’t have much of a following, maybe it’s best to play smaller rooms. Can you play acoustically? There’s plenty of tiny rooms to play, whether it be coffee shops or Norwegian furniture stores!”

Doing plenty of online homework is the best way to go about it. Trawling through pages like Tokyo Cheapo event listings as well as Tokyo Gig Guide will give you a good indicator of what type of venues host certain shows and genres.

As a general rule, the neighborhoods in Tokyo with the highest density of live houses are: Shinjuku, Nakano, Shibuya, Koenji (try Sound Studio Dom Bar) and Shimokitazawa. For Osaka, Namba/Minami and Umeda are the main nightlife areas, so start there and build up a database of venues in those neighborhoods.

Booking a room: Rules and requirements

So you’ve picked where you want to play, have some dates penciled in your calendar and are ready to reach out to the bookers, what next? Well be prepared because the system for booking a gig at a ‘live house’ in Japan is very different to getting a gig at a bar or a pub in the UK, the US or Australia.

The general protocol in Japan is for bands to essentially “rent” (in theory) venues/live houses for their shows. This means that bands who are performing are required to pay the venue for the space, typically through selling a certain number of tickets. If there aren’t enough patrons walking through the door to cover the agreed ticket number then the band have to cough up the rest. This isn’t always the case, though. If you’re a known band or a favourite of the venue owner, this fee may be overlooked; however if you’re unknown cold emailing, then expect it to be the norm.

Live show times are generally a lot earlier and far more strictly adhered to than Western contemporaries. So don’t be surprised if the show kicks off at 6pm and wraps up by 10pm. Exactly why could be anyone’s guess, but Japan is a punctual nation and last trains finish early.

Have an on-ground helper

For lack of a better term, get a ‘fixer’ if you want to ensure nothing gets too lost in terms of communication over long distances and across languages. It’s good to have someone in Japan that can help you out pre-, during and post-tour. It could be a manager, promoter, a fan of the band, a friend of a friend or some hired help off Craigslist. This person may also be key for negotiating the aforementioned booking fees with venue owners.

“Having a person on the ground really makes touring Japan way more achievable. We were very lucky enough to have had a contact in Tokyo when we first arrived and he helped organize a bunch of gigs and photoshoots which were very handy.”

Also, if you’ve never been to Japan before, you soon realize how difficult the language barrier can be. Just having someone that can speak the language lowers the chances of stuff going wrong—and as the old saying goes: What can go wrong, will generally go wrong.”

Your choice of accommodation is going to depend on a number of factors, but the most decidedly being how big is your group and how big is the budget. Airbnb in previous times was a rather failsafe go-to but given the crackdown you may have to look a little further and get more creative.

“When we’ve done this before, the band has always opted for Airbnbs, however now so they can be difficult to find! Depending on the lengths of stay, how many you’re touring with or where you’re gigging, there are a few options:

Hostels are a great option: Especially when you’re touring with a bunch of people. Securing a six or even bedroom dorm often allows ample space for gear storage and can be relatively cheap. A we recommend are are: Nui and Citan in Tokyo as well as Len in Kyoto.

If you’re staying in Tokyo for a while: there are a few English-speaking real estate agents that can sort you out for long-term leases (minimum one month). It can seem a bit expensive as you have to pay bills and generally have to leave a deposit a month of rent up front (which is refunded at the end of the trip), but it’s worth considering—www.TokyoCityApartments.net is what we’ve used.

If you’re band doesn’t have much gear at all, capsule hotels can workout to be pretty inexpensive! But you really must have not much gear.”

Feeding the band and crew

Aside from the fans and the beer, one of the major draw cards for The Lagerphones’ regular returns to Japan is the incredible (and compared to Australia) cheap food.

“Lucky enough, eating in Japan can be ridiculously cheap! Sushi, soba and udon are all affordable options. Basically, if you’re on a budget, there’s a bunch of cheap food chains that make pretty tasty food, for pretty cheap. And they often have a ticket machine at the front of the restaurant that will most likely have an English menu. Keep an eye out for Matsuya, Sukiya, Coco Curry, Yoshinoya and I’m sure there’s a stack of others that I’m forgetting!”

For those needing to feed an entire crew on an indie band wage, Hanamasa is an excellent budget supermarket. Typically geared towards the hospitality industry, the nationwide chain offers bulk packaged foods at wholesale prices. Beyond that, here’s a comprehensive guide to a whole stack of other cheap supermarkets in Tokyo (but found throughout Japan).

Similarly to planning a regular vacation in Japan, all of the country’s most popular modes of transport have their varying pros and cons.

Low-budget crews may consider opting for overnight buses which will connect you from city to city for often the third of what you’d pay for a bullet train. But they’re only for the organized and those not too worried about giving up a little comfort.

For those with mid-range budgets and not too much gear, bullet trains can actually work really well. It’s something The Largerphones have done a few times now. The only issue being that if you do play a number of cities it can add up quickly, so look into the JR Pass (or read here for other rail pass options).

A car or van is an option, and the renting in Japan can be relatively cheap. If you have an international driver’s licence and are confident behind the wheel it’s an option. Do be aware that although the country is small in terms of land mass and gas prices won’t be too much of a worry, high price toll roads in Japan are a ubiquitous, money hungry reality. To see whether you’ll have to pay a lot in terms of toll fares, plan out your route on Google Maps which will then offer an estimate.

Merch is the key to making a little extra money

You will be experienced and wise enough to know that the terms ‘DIY indie musician’ and ‘making money’ are definitely not synonymous. However one generally fail-safe method to make a little coin is by creating killer merch.

“The biggest way to make dollars in Japan is buy selling merch. There’s a big respect for merchandise in Japan and it’s one of the only places in the world where they still love to buy CDs! If you can get some t-shirts, tote bags, badges, pins or whatever made, seriously consider it.”

Wrapping up it’s time for the more serious stuff. It’s probably safest to preface this with a disclaimer: We’re not lawyers, and this is just a guide, so to avoid getting holed up at immigration, please check what you’ll need paperwork-wise depending on your situation.

If you want to do everything by the book (which you should) then it maybe be worth reaching out to an entertainment lawyer for a little advice. HG.org is a handy resource for that. If you’re looking at the longer term and want to make a career out of live music then be sure to spend some time dissecting this run down of the translated version of entertainment visa requirements in Japan.

As a band, touring Japan may seem like a lot of work and pre-planning and a lot of risk-juggling, but take it from The Lagerphones, it can also be one of the most rewarding and inspiring experiences any ambitious band can have (plus it’s pretty impressive on the bragging rights front).

So, what are you waiting for? Good luck and happy gigging!