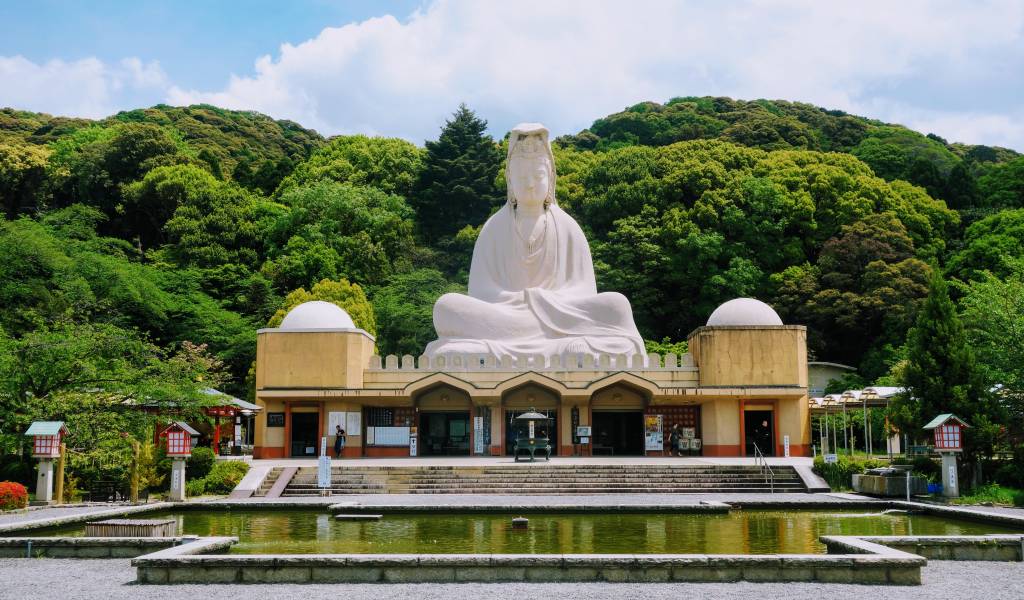 If you need a break from the stresses of the modern world, Japan offers an escape that’s good for the soul: embracing nature, Japanese aesthetic and traditional cuisine.

Relaxing is one thing, but to really feel at peace, you need to step away from the neon signs and busy streets and explore the spiritual side of Japan. Embodied in the ancient name of Japan, the cultural concept of wa (和) reflects a collective harmony and equilibrium within society. By prioritizing the peace of society over individual wants and needs, Japan achieves a smooth and calm balance which allows everyone to exist in a world with as little disruption or difficulty as possible (the politics of this has its flaws, but that’s a conversation for another day). When you’re in Japan, here’s how to incorporate some of the more spiritual elements into your travels.

The importance of nature in Japan is unrivaled and is the basis for the majority of the festivals, ceremonies and events which take place throughout the year. In a country that can and has been dramatically affected by natural events, the tie to nature is strong and recognized as a force which cannot be controlled. This respect is key to the appreciation of all elements of nature, from flowers to forests, and creates a myriad of opportunities to spend time immersed in natural landscapes.

The changing of the seasons

The changing of the seasons is one of the most notable examples of how nature is revered in Japan. Seasonal festivals, ingredients, haiku and ceremonies all highlight the gradual changes taking place. This embracing of the passage of time and appreciation of the beauty it brings is typical of Japanese aesthetic (more on that later) and allows you to appreciate the smallest of things as symbols of a much larger transition.

Attending cherry blossom festivities, flower festivals and autumn leaf viewing are some of the most popular activities, alongside seasonal cooking and treats like wagashi, which change throughout the year.

Although the concept may exist in other countries, Japan has given this restorative pastime a distinct name to officially validate it. The belief that spending time deep in a forest absorbing its innate peace and tranquility is a long-held tradition in Japan. A simple concept, it allows you to appreciate another Japanese experience: komorebi: the dappled sunlight shining through trees—and what could be more restorative than that?

Practiced for centuries in Japan, Buddhism carries plenty of soul-enhancing traditions which offer a form of spiritual peace. The four main schools in Japan are Pure Land, Nichiren, Shingon and Zen Buddhism. And while they have not always been accepted readily, today over 75% of Japanese people practice some kind of Buddhist traditions. Whether you identify as Buddhist, Shinto or neither, there are plenty of ways to experience the culture and learn some of the traditional practices, as both are renowned for being open and welcoming newcomers.

If you’re looking for a place to unwind, temples offer a refuge from the outside world as well as an opportunity to experience meditation. The Zen rock gardens of Buddhist temples are particularly relaxing as they are designed to aid meditation about the meaning of life. Designed to imitate the concept of nature (but not its literal appearance), the gardens are miniature landscapes best viewed from outside, and feature arranged rocks and gravel designs which imitate the ripples of water. Originating in Kyoto, the gardens are now found across Japan, and the most famous is Ryoanji, with a garden said to contain 15 rocks which are impossible to see all at once.

Formed by 88 temples on the island of Shikoku, the famous pilgrimage is related to the founder of Shingon Buddhism: Kukai, or Kobo Daishi, who visited all and founded many of them.

The journey is often completed on foot, but today many complete it by car or bike, as it is 1,200 km long. Traditional pilgrims, known as henro in Japanese, can be spotted easily thanks to their white robes and unusual hats, but the outfit is not required by any means. As helping a henro is considered to be paying respects yourself, many locals offer food and gifts (known as osettai) to any passing by.

Koya-san, a sacred mountain which formed the base of Shingon Buddhism is often the first and last stop of the pilgrimage, although it is in nearby Wakayama, not on Shikoku. Completing the journey and visiting all 88 temples is believed to remove 88 delusions, and if you have the time and opportunity it can be a pretty amazing experience.

Often focusing on cleansing the soul and expelling demons from society, there are plenty of opportunities to experience the purification of both Buddhism and Shinto ceremonies. The most common is that performed at the entrance of every shrine (and some temples) in the country: temizuya. Using water from a fresh source, guests wash their hands and mouth in a form of ritual purification known as harai. Large-scale versions are held to purify before a new year, before festivals and after disasters.

Events such as the annual fire festivals on January 15th (and other days) offer purification through firewalking and salt-sprinkling at competitions or other events is a similar tradition. In Buddhism, one of the most common rituals is that of Setsubun, where beans are thrown to ward off demons on February 3rd each year.

Formed from three traditional concepts but now featuring some more modern and even foreign-inspired inclusions, Japanese aesthetic is a philosophy applied to everyday life in Japan. The three traditional elements are wabi (a rustic simplicity), sabi (the beauty that comes with age) and yugen (the beauty of the subtle and unseen—once likened to shadows of bamboo), although translations vary due to their conceptual nature.

Additional concepts such as wabi-sabi offer an appreciation of the imperfections and impermanence of all things and shibui, the acceptance of the beauty of restraint and subtlety. Although similar when translated, the various terms have their own unique meanings in Japanese, often reflected in poetry and scholarly writings.

Geido is the aesthetic which applies to the Japanese arts disciplines of tea ceremony, calligraphy, flower arranging, Noh theater and Japanese pottery-making—all of which focus on the appreciation of the process of creation.

While there are many more we have not touched on, the value placed on these aesthetic ideals manifests itself through service, presentation, creation and attitude in Japan. In a culture which accepts imperfection and impermanence as beautiful in their own right, as well as recognizing the unseen beauty of everyday life, you can perhaps reach a different state of mind about the things that do and do not matter.

4. Reflect at an onsen

Bathing naked among strangers may not sound like it’s good for the soul (or your anxiety levels), but it is one of the most fulfilling and relaxing experiences available in Japan, if you give it a chance.

While soaking in natural hot spring water is restorative in itself, the co-bathing offers a unique benefit known in Japanese as hadaka no tsukiai. Meaning “naked communion”, it is the concept of being both naked physically and spiritually to those you are with. As many people onsen with friends, family and even co-workers, it is considered a place where discussions can be held honestly, with no barriers and relationships are made stronger.

This isn’t to say you have to go to an onsen with others, many go alone, and it is a revitalizing experience this way too. Often quiet, there is little better than being in an outdoor pool, admiring nature and able to reflect undisturbed.

5. Feed the soul with traditional cuisine

Food is deeply connected with the soul in pretty much every culture, and in Japan this is no different. The focus on seasonal ingredients plays a large role in this as it ties together an appreciation of nature as well as key elements of Japanese aesthetic. Whether it’s a cooling bowl of nagashi somen in summer or a hearty nabe hotpot in winter, the staples of Japanese cuisine can restore your spirits and revive your soul. While there are countless dishes one might crave, the concept of food for the soul can be a helpful divide when it comes to Japanese cuisine.

Simplicity at its best, washoku is the traditional cuisine of Japan which elevates ingredients rather than masking them with spices, creating the umami flavor now known across the world. Involving fluffy white rice (or soba in traditional buckwheat growing areas), miso soup, fish and a side of seasonal pickled vegetables, the meal is sophisticated in its simplicity.

Designated as an Intangible Cultural Heritage by UNESCO, it is one of the least-famous cuisines to emerge from Japan, but is—as the name suggests—the most Japanese. As with all Japanese cuisines, seasonal ingredients are key and this is reflected both in the fish selection and the pickled vegetables but also the rice, which peaks with shin-mai (new harvest).

Focusing on presentation, flavor and texture, kaiseki is the traditional multi-course meal usually reserved for special occasions in Japan. A refined experience, it is related to the art of sado—the way of tea—as it was originally a meal served before a Japanese tea ceremony began.

The high levels of service, exquisite quality and sense of occasion remain, making it a special and peaceful experience. Elements of Japanese aesthetic are apparent in the use of color and carefully carved vegetables and fruit used as decoration, and the seasonal elements which play a large role throughout the menus.

A Buddhist cooking style, Shojin ryori means ‘devotion cuisine’ and is entirely vegetarian, with a focus on tofu and plants. Both simple and refined, it is said to bring balance and alignment to body and soul, and omits meat, fish and often pungent items like garlic and onion. The rule of five is a key element to the menus, with each meal ideally holding 5 colors (red, black, white, yellow and green) and five flavors (sweet, salty, sour bitter and umami). Seasonal ingredients are used to ensure the eater is kept in order with nature and waste is kept to a minimum. Originating in China, it is now most easily found in Kyoto, but is offered in temples all over Japan.

Each area of Japan has its own special dish, but there’s only one city famous for comfort food, and that’s Osaka. Home to Okonomiyaki, takoyaki, kushikatsu and more, it is also unsurprisingly associated with the phrase “Kuidaore” which means to cause yourself financial ruin through extravagant eating.

The focus on hearty and social eating is another great aspect as is the relaxed atmosphere surrounding food (like eating outside) which is usually only found at festivals elsewhere in Japan. In Tokyo, the soul food has to be monjayaki—a less photogenic/more liquidy version of okonomiyaki, but still delicious. Wherever you are in Japan, you’ll find a local specialty, but head to Osaka (handily nicknamed Japan’s Kitchen if you want the real deal.