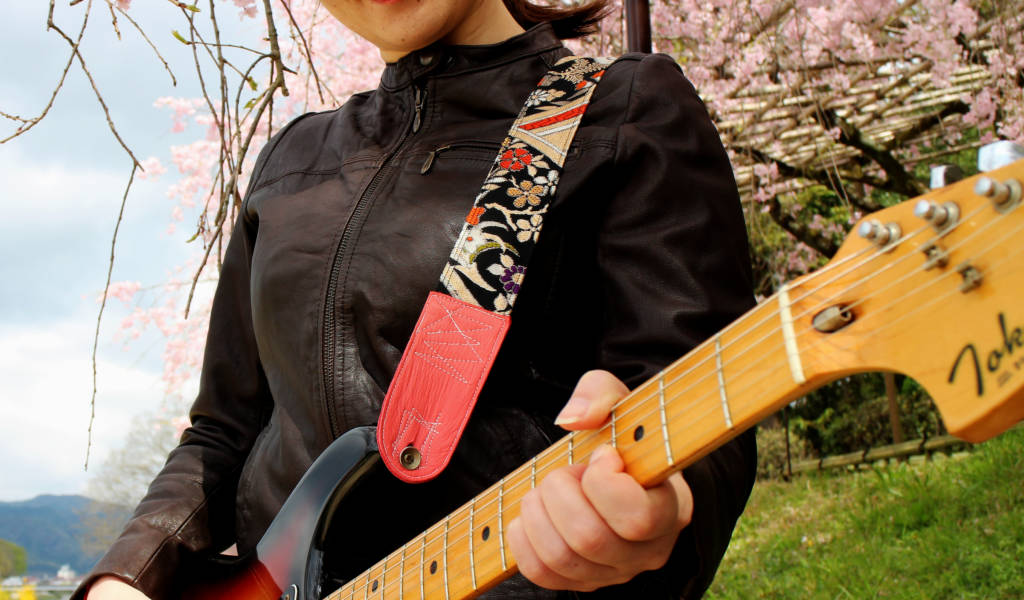 After returning from Berlin to settle in Kyoto, Ayumi and TJ have found themselves crafting beautiful guitar straps from recycled obi (sashes used with kimono). We talked about how they discovered their new passion, what makes it special, and how they find the music scene of the traditionally quiet city.

After searching fruitlessly for a characteristically Japanese guitar strap, they decided they would make one themselves and began to scour the city’s second-hand shops. “At first we thought we would use a Kimono, but we found a really beautiful obi in a second-hand market at Kitano Tenmangu Shrine and we suddenly realized how strong and gorgeous they are“. Through trial and error, they crafted their first strap and knew this might be something others would appreciate too. “People pay thousands of dollars for a beautiful guitar, then use a cheap ten dollar strap to hold it up – we thought that a strap as beautiful and unique as the guitar made sense“.

The transformation of one accessory into another is fitting, and while the guitar acts as the kimono, taking center stage – the Obi has a practical, but also decorative role to play too. “The whole appearance of the kimono (the atmosphere and look) will change depending on the obi. A guitar is the same I think.” Keen to experiment and create more straps, Ayumi and TJ became avid obi spotters, searching the best markets and second-hand shops for special pieces to be re-crafted into something new.

Luckily, they live close to the traditional textile district, Nishijin, where kimono and obi are still made and Ayumi often cycles there to find new pieces. Letting us in on one of her favorite spots in the city to relax, she mentions Funaoka onsen: “I like going there after work sometimes and listening to the weaving shuttles in the nearby houses.”

While plenty of new, pristine obi are available at traditional stores in the city, Ayumi prefers to use second-hand ones for the straps, citing the perfectionism of many Japanese owners as the reason there are so many available. “Many people won’t wear them anymore if there is even a little stain, I think it’s because they only wear them for special occasions these days“. While one woman’s loss is another’s gain, their pre-worn nature adds another quality to the fabric: “with second-hand obi, there’s a history – they all have stories. We want to add to their stories and give them a new life“.

The unique quality is one they are keen to preserve, and each strap is entirely different to any other, and can never be reproduced, even if they wanted to. After selecting the obi, they cut it into three patterns, ready to make three individual belts. Strips from three completely different obi are then used to back them, making each one a unique combination, before the final touches are added: “we match them with the leathers that bring the colors out – there’s usually a traditional color and then some colors that pop out, like putting modern and old Japan together“.

Using leather off-cuts sourced from a local shop and brass buckles made in Osaka, the entire creation is a product of recycling and careful craft. As a child in Osaka, Ayumi’s grandmother and aunt made Kimono, often presenting a young Ayumi and her sister with hand-sewn outfits she still has stored away. Although she wasn’t able to learn the skills from her grandmother, the creative streak and attention to detail have clearly been passed on.

Sold under the name Singing Crane, we were curious as to how they came up with the name – something both musical and Japanese, but without being a cliche. Living by the Kamo River, the couple spend their days surrounded by singing birds. Cranes represent happiness and long life, so when combined with their musical surroundings, the name soon became clear: “We thought it would be a beautiful name for our guitar straps, as each one should help its guitar sing and make people happy“.

A keen musician, TJ often plays at local bars, and they were happy to let us in on a few local spots with live music in Kyoto. “Slowhand is a really old-school Japanese bar – Sano-san (the owner) doesn’t speak any English, but he always welcomes foreigners and he plays old seventies music. FSN bar is run by a French guy called Phillippe – it’s pretty busy and pretty hip – he can speak English”. They add that while Kyoto’s music scene is much smaller than Tokyo, Yokohama or even Osaka, there are always interesting musicians around.

Already selling across Japan and internationally, they have a site filled with unique guitar straps and they plan to expand in the future. While straps are their main focus, they are considering making other pieces like guitar and accessory bags, as well as a producer’s bag or guitar case, but first, they’re planning “to make more beautiful and funky guitar straps”. Take a look at the items available here, and be sure to order fast, because if you miss it, there won’t ever be another one like it!