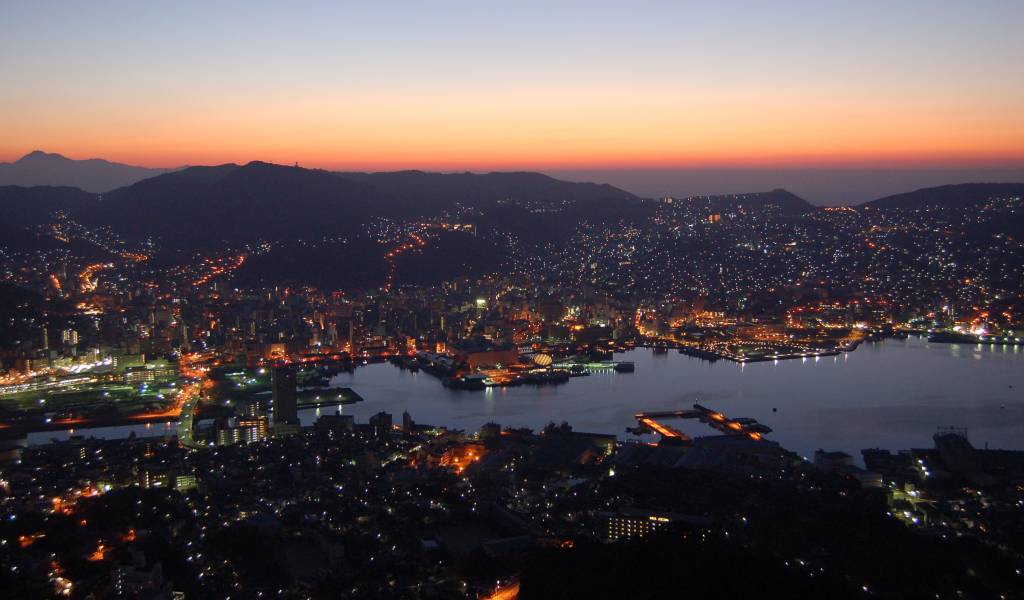 Mount Inasa: One of Japan's Most Spectacular Night Views

If you thought top 5 lists were invented by BuzzFeed, you’d be wrong. Ranked lists of attractions have been part of tourism in Japan since well before Buzzfeed—and the internet. Nagasaki’s Mount Inasa (Inasayama) is on just such a list as one of the top three night views in Japan (the others being the Kobe cityscape in the Kansai region and Hakodate in Hokkaido). The operators of the cable car that runs up the mountain go even further—laying claim to Mount Inasa having one of the top 3 urban night views in the world, alongside Hong Kong and Monaco.

Having visited Hong Kong a number of times and having passed through Monaco (albeit during the day) I can attest to the view of Nagasaki from Mount Inasa being among the most spectacular I have seen.

At the peak, there is an observation tower for getting above the surrounding vegetation and getting the best view. It’s a popular spot with couples, families and photography enthusiasts. Pros come with tripods for keeping their cameras steady. I managed to get some pretty good shots just by keeping my camera steady on the railing.

Getting to Mount Inasa

There are a number of options for getting to the peak with varying costs and convenience: cable car, bus and car.

The cable car that runs from the base of the mountain to the peak is the most expensive option (except for catching a taxi) at ¥1,230 for the round trip or ¥740 for a one-way ticket. The view from the cable car on the ascent and descent though are spectacular. If you catch the ropeway later in the evening, be aware that there can be long queues to get down and cars can get quite crowded. The trip itself takes about 5 minutes with cars leaving every 15 minutes with the last car departing the summit at 10pm.

To get to the cable car station at the base of the mountain (Fuchi-jinja Station), you have a couple of options. First, there is a free shuttle bus that departs at regular interval between 7pm and 10pm from six points within the city—Hotel Belleview Nagasaki Dejima, Hotel Monterey Nagasaki, ANA Crown Plaza Hotel Nagasaki Glover Hill, Hotel New Nagsaki, JR Nagasaki Station and the Best Western Premier Hotel Nagasaki. The shuttle bus is free, but places are limited so you should head to one of these points in advance to reserve your ticket.

Alternatively, you can take a regular bus from Nagasaki Station (routes 3 or 4) bound for Shimo-ohashi and get off after about 10 minutes at the Ropeway-mae bus stop. The bus stop at Nagasaki Station is labeled and the bus fare is ¥150. Ask the driver if you’re afraid of missing your stop.

Instead of just taking the bus to the cable car station, you can take a regular bus most of the way to the summit. Outside Nagasaki Station, look for the No. 5 bus going to Inasayama. The bus will drop you at the lower car park which is still about 2000 ft from the summit up some stairs.

The No. 5 bus leaves about twice an hour with the last bus (at time of writing) departing from Nagasaki Station at 9:02pm. The last bus returning to Nagasaki Station departs from the Inasayama bus stop at about 9:05—check the timetable when you alight. Also, during the winter months, the bus doesn’t stop at Inasayama—so check with the driver—Inasayama ni tomarimasuka? (Does it stop in Iasayama?).

Although not as convenient, the total return trip on the bus will set you back a cheapo-friendly ¥300.

If you have a rental car, then driving is a good option. The road to the summit is good and there is paid parking near the observation tower—except on weekends and public holidays when access to the summit parking lot is restricted between the hours of 6:30pm and 10:30pm.

Just because YouTube has about everything you could imagine, here is a video of someone driving to the top.

Disclosure: Our writer’s trip to Kyushu was undertaken with the support of Japanican.
Open with Maps
Written by: Greg Lane
Greg's Japan favorites are: Hirosaki Guide: Japan in a Nutshell, Hoppin’ on the Brew Wagon: Kanazawa’s Best Craft Beer Bars, 10 of Japan’s Most Impressive Castles
Filed under: Travel
Tags:
Sharing