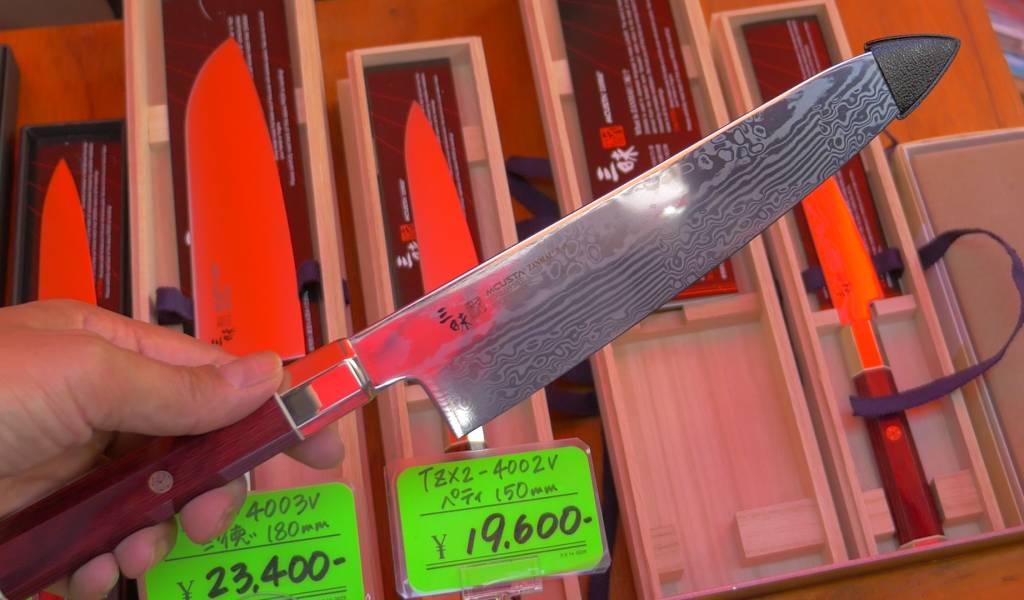 Seki: City of Knives, Swords and the Hamono "Cutlery" Festival

Buying a Japanese knife or sword is one of the most popular things tourists purchase when traveling in Japan. There is no place that makes a better blade than Japan, and the industry has been perfecting sharpness and strength for centuries.

Recently, I got a chance to learn more about Japanese knives and swords at a festival in Seki, Gifu Prefecture. Called the Hamono Matsuri (刃物まつり) in Japanese, Seki’s Cutlery Festival is the most famous in in the country because it’s the base for most of Japan’s cutlery industry. Everything is on sale including swords!

Take a look at the compete experience in the video here:

How much is a Japanese knife?

Good knives are not cheap. This is because they are forged from several pieces of steel into one knife, while cheap blades are stamp cut like cookies from weak steel.

Expect to pay about 13,000 to 20,000 yen for a top-quality Sentoku knife. Sentoku knives are 15 to 18 cm long and considered the basic all-purpose knife for the kitchen. Cheaper knives can be found for 2,000 to 10,000 yen but the quality will be noticeably inferior. The festival is a perfect place to compare quality from the highest end to the cheapest.

During Seki’s Cutlery Festival, you can also dive into the history of swordsmithing and forging of the katana (traditional Japanese sword). Seki’s been producing samurai swords for over 700 years and they have a museum dedicated to swords and sword-making. The Seki Tradtional Swordsmith Museum is well worth a visit, especially during the festival because they put on a sword forging demo show open to all.

Using the old techniques from the 13th century, viewers get a rare look at katana being forged with hammers slamming hot “tamahagane steel” on an anvil. The process is repeated 5 times for the demo show with the steel being cut, folded and hammered again, each time making the steel stronger.

The festival also has fantastic performances by groups who still practice the samurai arts and swordsmanship and groups who choreograph “chanbara” martial arts scenes with swords for samurai movies. This sword acting seen live makes you want to buy a sword!

There’s no blade and they can be easily taken home in checked-in baggage while a real sword will need to be sent home, which won’t be cheap.

All in all, anyone who is remotely interested in Japanese knives whether it’s for the kitchen or outdoors, Seki is the place to buy a blade.

When is the Hamono Festival?

It takes place annually in the beginning of October on a weekend. The 2017 Hamono Festival is tentatively set for October 7 – 8. This will be mark the 50th annual Cutlery Festival held in Seki.

The Nagaragawa Tetsudo Line will take you 7 stops to Seki Station through very scenic countryside along the river.

Cheapest: You can take the Meitetsu Line (private rail line) from Meitetsu Nagoya Station next to JR. They run once an hour and it costs 1,270 yen with two changes at Shin-Unuma and Mino-Ota.

Buses also depart from Nagoya Station for Seki for about 1,000 yen.

Other attractions in the area

Monet’s Pond: The pristine water and colorful lilies make for a surreal aquarium-like viewing experience at the base of a forest. It look like a work of watercolor impressionist art!

Mino City: This place is a short train ride on the Nagaragawa Tetsudo Line known for its traditional washi paper. The old area is well preserved and worth a visit.