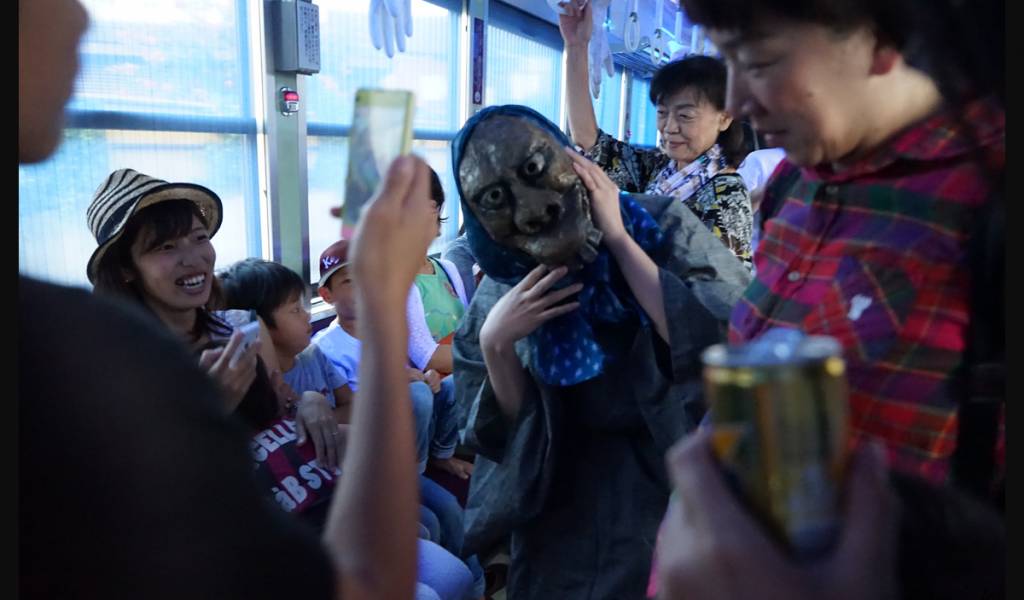 Summer is a time for spookiness in Japan. So, in the spirit of summer, the Randen Line in Kyoto runs a Yōkai Densha (Ghost Train) event each year. Take a ride with scary yōkai creatures, or dress up as a yōkai yourself for a discount ticket!

It’s stinking hot in Japan during summer. The heat and humidity will sap energy from you faster than you can say “air conditioning”. In the past, Japanese people used a number of practical and psychological methods to keep cool. One of these psychological tricks was telling scary stories. The idea was that listening to these stories will give you chills—perfect for cooling down on a hot night. These stories often featured yōkai; a collection of supernatural apparitions from Japanese folklore. There are dozens, if not hundreds, of yōkai from all over Japan. They’re not quite ghosts and not quite monsters. They aren’t all bad or dangerous either. But they are all fascinating, with a story behind them.

The Randen Line is the last tram line in Kyoto. Founded over 100 years ago, the main line runs between downtown Shijo-Omiya and tourist hotspot Arashiyama. It’s a charming streetcar on a regular day, but each year in August, it takes a turn for the spooky with the Yōkai Densha event. Started in 2007, the event features specially decorated trams which run the entire line without stopping. Human passengers can enjoy the spooky atmosphere and the company of yōkai passengers, who are presumably commuting home from a tough day at the office.

The event is running between August 11th and 15th, with five scheduled trams each day, departing from either the Arashiyama or Shijo-Omiya terminals. Tickets are available 40 minutes before departure and are ¥220 for adults or ¥110 for children—quite a cheapo price! But it gets better: if you dress up as a yōkai, ticket prices are only ¥50. Isn’t it nice that Randen’s thinking about our yōkai brothers and sisters like that?

After the tram ride (which takes about 20 minutes), continue the spookiness with yōkai-themed food and drinks from nearby restaurants. Some shops are also selling yōkai-themed souvenirs to take home. More details can be found (in Japanese) on the event flier [PDF].

August is here! Time to get your yōkai on!