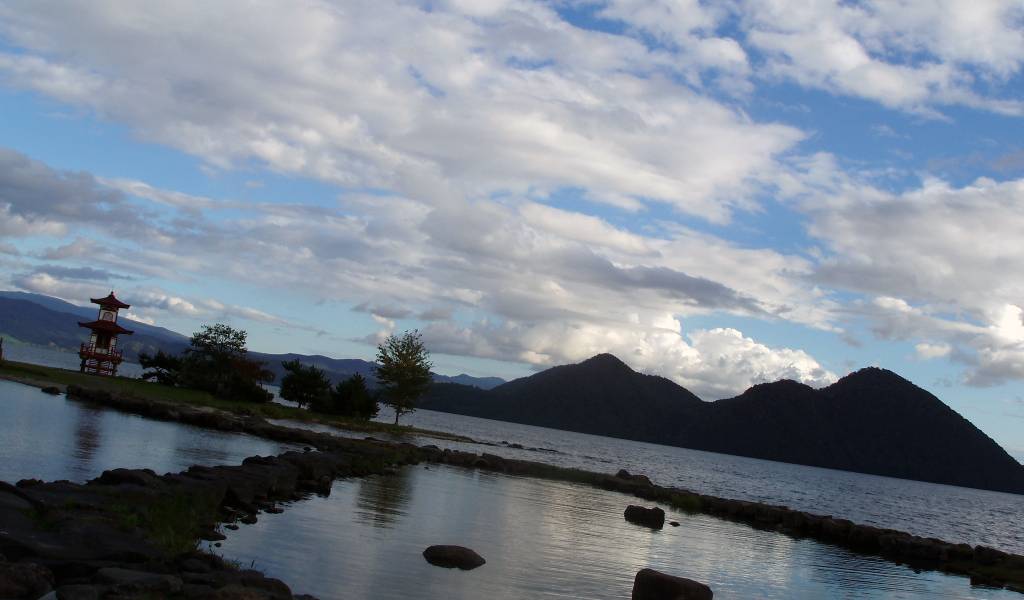 Hiking Through the Twilight Zone at Lake Toya

When a large eruption occurred about 110,000 years ago and the lava started to cool down over the thousands of years that followed, Lake Toya rose from the earth. Today the caldera is regarded as one of Hokkaido’s three great landscapes and is a popular destination for anyone visiting Japan’s northern island.

For the locals, Lake Toya is an ideal weekend trip for its famous hot springs along the long promenade on the side of the lake’s shore. Many of the luxury resort opened shortly after the eruption of Mount Shito in 1910 for the lake’s waters are believed to have healing properties. The slightly brown water is said to heal arthritic pain and other ailments as well as improve the condition of your skin. While you can enjoy a dip in the hot springs for only a few hundred yen, there are also numerous so-called ashiyu (footbaths) to relax your feet after one of the many hikes (more on the trails later)!

The heart of Lake Toya

In the middle of Lake Toya lie four islands known as Nakajima, which literally means ‘middle islands’. After taking one of the ferries cruising across the lake you will arrive at a small dock with a visitor center. Here you can join a special tour known as the “Nakajima Deer and Giant Tree Tour”, but you can also just opt to explore the island yourself as the path is easy enough to follow. As you can probably guess from the tour’s name Nakajima is famous for its Hokkaido deer. Walking among the ancient trees that have stood there for many decades and some even centuries is quite a dwarfing experience. While the hike is not very challenging it is, as always, recommendable to bring plenty to drink and a snack or two since there are no rest stops apart from the visitor center at the port.

The giants of Lake Toya

As some of you may know, mountains tend to form by volcanic eruptions—and Mount Usu, as Lake Toya’s oldest volcano, has brought forth quite the family. In 1910 violent eruptions created Meiji Shinzan and between 1943 and 1945 a series of earthquakes gave rise to Showa Shinzan. Named after the reigning emperors at the time, the two mountains are some of Japan’s youngest geological formations. Showa Shinzan is in fact still venting sulfurous fumes.

A great way to get to know Mount Usu and its family is by hiking along its tricky three-hour trail or cheat a bit by taking the Usuzan Ropeway operating between May and October. From Mount Usu’s observatory platform you can enjoy a breathtaking view over most of Lake Toya and truly take in the scenery.

As you may have noticed by now, the area is prone to eruption and the most recent one happened in March 2000. Superheated magma and steam of Mount Usu forced their way to the surface opening a few dozen craters along its western side. The trembles caused volcanic mud flows to rush down from the mountainside towards the onsen town. While the mud flows stopped just before hitting the town itself, not all escaped unharmed. Behind several large dams (to protect the town from any erosion that may still occur) lies the Konpira Crater Hazard Area. The brief walk around this publicly accessible area leads up to one of the easier walking trails at Lake Toya.

The trial opens around 7am and closes at 5pm in October and early November. Unfortunately, it remains closed from then until mid-April after which it is open again until 6pm. The trail brings you across the erosion dams up to Konpira. Along the trial you will find many reminders of what happened here only a few years ago, including an abandoned hot spring hotel and apartment building. For the geology enthusiasts among us, the sight of the large water-filled craters the eruption left behind is certainly worth a bit of an extra climb along their steep ridges.

Having taken a dip in a hot spring to relax those muscles after all that walking, it is time for some entertainment! Every evening from May all the way through October you can enjoy a fireworks display along the lake’s promenade. If you happen to stay at a traditional onsen do not hesitate to wear your yukata and enjoy the 30-minute display in a way that’s oh so Japanese.

Since Toyako Onsen doesn’t have it’s own train stations, the best way to reach it is by car or bus from the nearby Toya Station. Catch the Special Express (¥5,920) or the local trains (¥3,240) to Toya Station and then catch the Donan bus to Toyako Onsen (¥330). If you are planning on staying in an ryokan overnight, many offer shuttle services from Sapporo or the airport, which can be cheaper than trains and busses! Alternatively, you can catch a Donan bus direct from Sapporo but seats must be reserved in advance (¥2,780 each way).

The season is also something you will need to consider. While summer is the ideal period to enjoy hiking and other outdoor activities, winter is a great time to steam away at an onsen resort like Lake Toya.