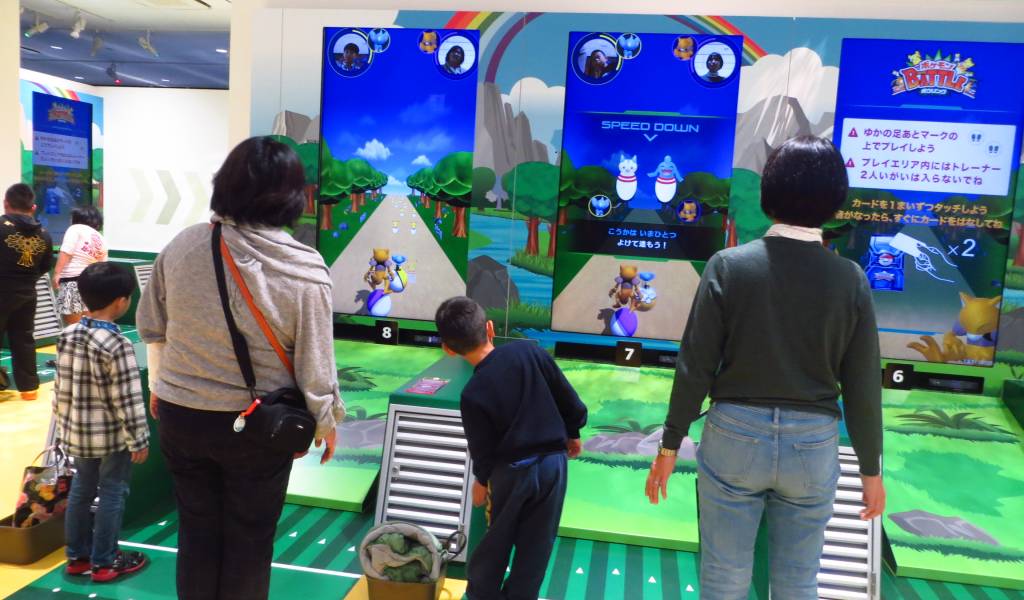 November 19, 2015 marked the opening of Lalaport Expocity, a shopping complex built on the grounds of 1970’s Osaka Expo. One of the most awaited attractions there was the Pokemon Expo Gym—just hearing about it was enough to get Pokemon fans all over the world excited! This writer was able to visit the Pokemon gym just a few days after it opened, and as for the question of whether it was worth it—well, why don’t you read on and decide for yourself?

The first thing to know is that if you’re expecting a Pokemon gym akin to those in the game and anime, wherein you battle gym leaders to get badges, you might want to rid yourself of that expectation. Nope, there are no battles or tournaments whatsoever, so if you wanna be the very best, like no one ever was… well, you might be disappointed. It’s also not a gym in the typical sense of the word, wherein you get a good workout (although there is at least one attraction that could count as exercise), either.

Instead, think of it as a cross between an arcade and an interactive theater—one that is largely kid-oriented. Pokemon may have a fanbase that spans different age groups, but in Japan, its marketing is still predominantly geared towards kids. As such, the Pokemon gym is no different, and it might be too kiddie for some adult fans’ tastes. It is quite telling that most visitors to the gym were kids. Many adults were companions to children, but don’t worry—there were also some adults who weren’t there as kids’ guardians, and they weren’t given odd looks or anything of that sort. As long as you aren’t disruptive, no one will give you hell for being an adult in the Pokemon gym.

First-time visitors have to purchase a card for 500 yen. This card, which is valid for a year, can then be charged with credits. There are two types of attractions in the gym: theater-type (600 yen each) and arcade-type (400 yen each). These aren’t the official classifications of these attractions, but those pretty much describe their nature. It’s also worth mentioning that while attraction titles have English translations, all attractions are in Japanese, and the staff are friendly and helpful, but not fluent in English. While instructions for the arcade-type attractions can be demonstrated via body language, the theater-type attractions are interactive. This writer could get by with conversation-level Japanese, so she wouldn’t know if any adjustments would be made for non-Japanese speakers, but it doesn’t seem very likely. Since this gym is for kids, after all, the dialogue in these attractions is nothing too complicated, so if your Japanese level is approximately similar to that of a sixth-grader, you should be fine.

As of this writing, the attractions are:

Theater-type (no photos and videos allowed in here!):

This author checked out all but Charizard’s Battle Colosseum, Zoroark’s Slick Dojo, and Pokemon Battle Bowling. For the theater attractions, the premise is pretty much similar: you get to talk to Pokemon and do a few things with them. In Smeargle’s Audition Studio, we in the audience had to show some simple dance moves, and some kids were picked to dance on stage at Smeargle’s encouragement. In Machamp’s Counseling Room, we learned to punch like Machamp, and he asked each audience member (we were very few at that time) to name something he/she had worked very hard on, which was followed by some encouraging words. As for the arcade attractions, Macho J’s Pokemon Boxercise is like Dance Dance Revolution, except with your fists (and occasionally, your whole body, e.g. doing squats and jumping); Gardevoir’s Investigation Headquarters involves finding as many similar Pokemon (e.g. all Slowpokes or all evolutions of Eevee) as you can throughout different on-screen areas to foil the villain’s plans; and Pokemon Battle Bowling is a 2-player game that entails moving your body as if you were a bowling pin. If you arrive solo, note that the staff won’t find a random person to pair you with (plus, you might not even find a partner if there aren’t many people!).

Also of interest are the augmented reality (AR) hotspots around the gym, which work with the gym’s app, Pokemon Expo Gym Gear (available for both iOS and Android). Perhaps you’ve heard of the AR Pokemon game coming out in 2016. Well, this app isn’t it, but perhaps it could at least give you an idea of things to come. Of course, there’s also a souvenir shop where you can buy official Pokemon merchandise, including a few that are exclusive to this gym. If you’re hungry or thirsty, you can buy some Pokemon-themed food as well.

While this author was expecting more attractions and was hoping that it’d be something like a Pokemon theme park, she thinks that if you have the time and money to spare, and are a Pokemon fan, it’s worth visiting—even if it’s just once—for the novelty and experience. (She wouldn’t be so sure about visiting again, though.) However, for sure, some may feel differently. With this article in mind, you can probably answer the question of, “Is it worth visiting?” yourself.