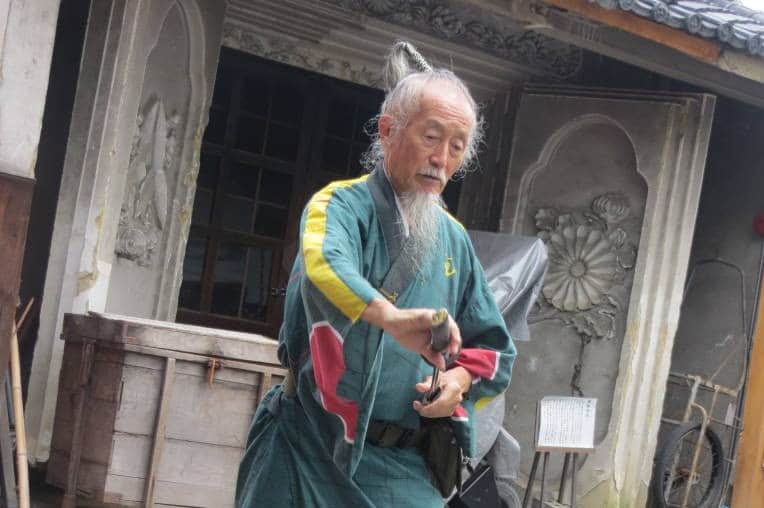 Strolling Around Kyoto with Samurai Joe

How’d you like to meet a living legend? 86-year-old Joe Okada, better known as Samurai Joe, is Japan’s oldest living tour guide and, as he calls himself, Japan’s last samurai. Of course, the samurai from feudal Japan are long gone, and, as far as he knows, Samurai Joe does not have samurai lineage, but in the ’60s, he learned to wield a sword and to act like a samurai to entertain tourists, many of whom thought that they could still meet a samurai in the flesh. (We suppose that that makes Joe a modern-day samurai, then!) With over 50 years of experience as a licensed tour guide in Kyoto, he knows his stuff very well, and his being Samurai Joe has paid off, as it’s gotten him featured in several local and international articles and TV shows over the years, including the David Letterman Show. In 2011, the Mayor of Kyoto even designated him as the Distinguished Master of Kyoto Hospitality.

It sounds like he’s achieved a lot at his age, doesn’t he? You’ll be glad to know that he’s just as impressive in real life! Despite being in his late 80s, Samurai Joe is healthy, lively, and in good spirits, so you’re sure to enjoy his fun, informative Cool Kyoto Walking Tour, during which he’ll not only show you around, but he’ll also show his impressive swordsmanship skills. The tour, which requires a minimum of 5 people to push through, is conducted in English, and takes place on Saturdays from 10:00 am to around 3:00 pm, though it may end later depending on the pace. Children under 12 can join the tour for free, but otherwise, it costs 6,600 yen per person, which already includes a light (but late) lunch of sushi (but don’t worry; you’ll be eating some snacks and sweets along the way, so despite the late lunch, you won’t be starving!). Be sure to book in advance to confirm a slot in the tour.

If you’re looking for a tour of Kyoto’s popular tourist spots (Kiyomizu-dera, Fushimi Inari, Heian Shrine, and the like), this is not the tour for you. Many other tour guides and travel agencies can take you around those places, but how many will take you to see a glimpse of locals’ lives? That’s the appeal of Samurai Joe’s tour. The only relatively popular tourist spot on the itinerary is Kyoto’s Imperial Palace, where you will visit Shusui-tei, an old teahouse, and get a beautiful view of the garden surrounding it. Other than that, you will walk through quiet neighborhoods and streets, stopping by small shops every now and then to try sake, drink tea, try your hand at calligraphy, appreciate exquisitely crafted lacquerware, and sample some local delicacies. You’ll see how the locals take pride in their livelihood; for instance, we saw an old lady making geta (wooden sandals), and we learned that some of the shops we visited or passed by had been around for quite some time. Also, instead of going to the popular shopping arcades with their bright lights, branches of large chains, and touristy appeal, Samurai Joe will take you to a shopping arcade that’s frequented by locals rather than tourists.

What is Kyoto without a visit to at least one temple and/or shrine? Not to worry, Samurai Joe’s got you covered, though again, don’t expect to visit the famous temples and shrines. He’ll take you to a shrine where you’ll be treated to his special samurai show, in which he’ll demonstrate his best-known skill: slicing apples in midair. (And yes, you’re free to take all the photos and videos that you like!) Do you dare volunteer to assist him in his demonstration? If you were so impressed by his apple-cutting skills that you’d like to follow in Samurai Joe’s footsteps, he also takes apprentices. In fact, in 2009, one of his apprentices made it to the Guinness World Records for cutting 23 apples within a minute.

So if you want to see a less-viewed side of Kyoto at a leisurely pace, you now know who to contact. The charm and appeal of the tour can be attributed not only to the itinerary, but also to Samurai Joe, the interesting personality that he is. If you have plenty of cash to spare, you can also hire him to be your private tour guide around Kyoto for a fee of 50,000 yen per day (inclusive of a sword demonstration), watch him put on a 25-minute samurai performance for 60,000 yen, or book him and some maiko for a banquet for 150,000 yen. This author is a cheapo, so all she could afford was Samurai Joe’s walking tour, and she can assure you that it’s worth your money and time.