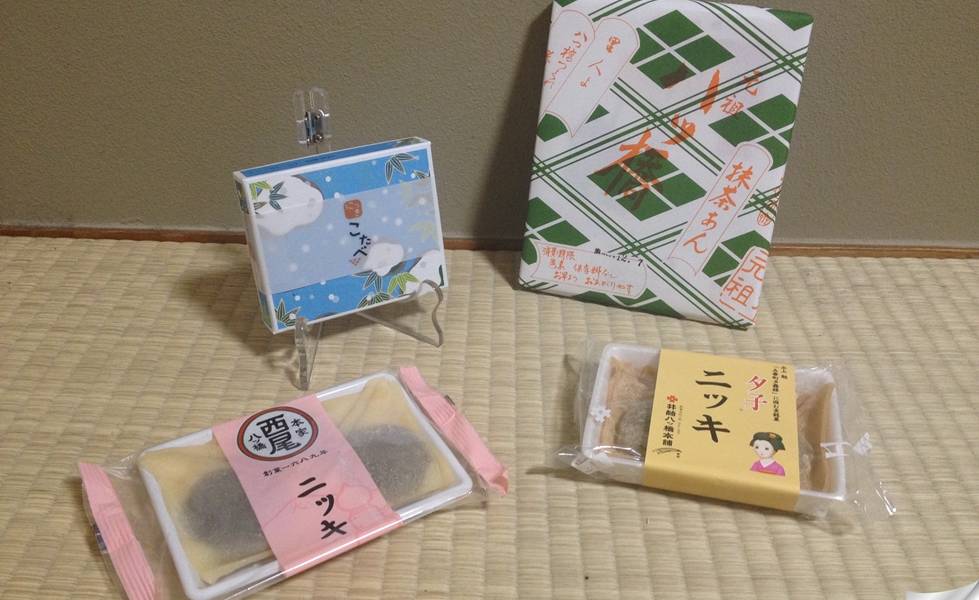 Sweets are the souvenir (omiyage in Japanese) of choice from Japan and especially from Kyoto. According to prefectural research, over 30% of foreign tourists to Kyoto purchase Japanese sweets or snacks as a souvenir to bring back home. Amongst the countless choices available, Kyoto’s traditional sweet, yatsuhashi, stands above all as a favorite for both foreigners and Japanese alike. Yatsuhashi is made from mixing rice flour, sugar ,and at times other ingredients such as cinnamon, into a dough to steam and flatten into sheets. Between the sheets all kinds of flavored pastes are added including of course the traditional azuki beans but also chocolate or fruit flavors.

With so many flavors and several brands available, the question “”Which is the best?” easily comes to mind. Although it’s hardly possible to taste all the yatsuhashi in Kyoto, we’ve shortlisted the most widely available options, as well as some of the ’boutique’ ones—and always with a cheapo budget in mind.

First up is Yuuko Nikki, one of the most widely available brands found throughout the city from Kyoto Station to Kiyomizudera, from the Arashiyama district to Idutsu Yatsuhashi Honpo (a famous confectionery shop). A plastic package containing five average-size yatsuhashi costs about 260 yen, but larger boxed packages are also available varying in size and price. The sweets has a two-week shelf life which is the longest one from our list.

The verdict: There are multiple tastes available, so we choose to go for a traditional cinnamon flavored Yuuko Nikki yatsuhashi. The sheets are quite tough due to added preservatives, while the cinnamon flavor is also very strong. The azuki bean filling is also quite scarce and at times you will feel hard bean shells within the paste. If don’t expect to gift your yatsuhashi within a week, Yuuko Nikki is your safest, but not the most tasty, option.

As an equal competitor to the previous yatsuhashi, Nikki by Honke Nishio Yatsuhashi is also available at 260 yen for a similarly sized package, with larger boxed packages also available.

The verdict: In contrast to the above option, Honke Nishio’s sweets only preserve one week which translates into far softer sheets and smoother textures. Furthermore, it must be said Honke Nishio yatsuhashi’s azuki bean filling is larger, more smooth and tastes more natural while having a mild pleasant cinnamon smell. When it comes to the budget options, it is fair to say Honke Nishio’s is the better choice.

Otabe’s Kotabe Nikki yatsuhashi is slightly more expensive than the previous budget option costing about 370 for five sweets, but they are half the size of an average yatsuhashi making it more ideal for a single person rather than a sweet to share. The package is very nice with many different colorful designs with the sweets preserving for a week.

The verdict: Although the yatsuhashi is tiny, it is full of filling and the sheets are quite soft. Kotabe Nikki yatsuhashi’s smaller package is quite convenient if you want to take a good stash of them back home in a nicer package than just plastic.

Lastly, in our opinion the best yatsuhashi comes from a small store near Kiyomizudera with a long-standing tradition of preparing Japanese sweets and has even been awarded for their products by multiple international institutions. Ganso Yatsuhashi Nishio Shoten’s yatsuhashi are delicately handmade with perfectly thin and soft sheets covering smooth and delicious filling without the use of preservatives or pigments. A small package of 10 yatsuhashi only costs around 560 yen, making it not only stunningly delicious but also highly affordable as an omiyage.

The most boutique option comes from Nikiniki with stores near Kawaramachi Station as well as inside Kyoto Station. The package includes two flavors of 10 yatsuhashi sheets and two pastes, both of which you can choose the flavors yourself at the store for 1,180 yen. What makes this package so unique is the fact that you can make the yatsuhashi yourself in whichever shape you like using a small cup or other utensils. The smooth and soft flavored sheets are very colorful while also being naturally sweet and aromatic. For our package we choose a maroon and ram raisin filling which are perfectly sweet and very natural. The meticulous effort that Nikiniki puts into making these yatsuhashi is reflected in its amazing taste. Nikiniki’s yatsuhashi beautiful and unusual presentation in combination with its deliciousness make it a great and unique omiyage.

Kyoto
Written by: Bjorn
Filed under: Food and Drink | Things to Do
Tags:
Sharing