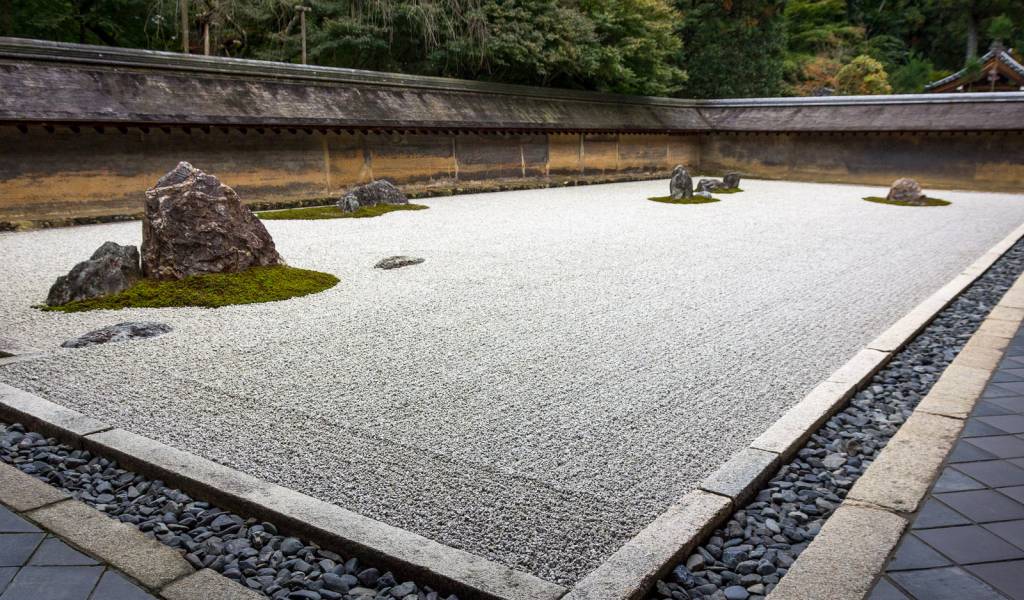 With an impressive name as “The Temple of the Peaceful Dragon”, Ryoanji has quite something to live up to. And so it does, this famous World Heritage Site with Zen garden in the northwestern corner of Kyoto easily rivals its most impressive foreign religious counterparts, such as Stonehenge. For us Cheapo’s there is another reason to head to this part of Kyoto, Jumbo, a favourite restaurant amongst locals that offers very large okonomiyaki dishes for tiny prices.

How to tame your dragon?

Ryoanji belongs to the Myoshinji Buddhist school, which has its main temple complex and school just around the corner towards JR Hanazono Station. As you enter Ryoanji you will first pass through the temple’s former kitchen leading up towards the Hojo, which is the former residence of the temple’s head priest. The Hojo features several impressive paintings on the sliding doors, including those of dragons, between its tatami rooms as well as several minor gardens along the rear side of the building. One of them holds a tsukubai, a small stone washbasin, baring the four-character inscription “I learn only to be contented.”, which is a key phrase within Zen.

The temple, however, is most renowned for its gravel-and-rock Zen garden as it is, according to some, the greatest masterpiece in achieving the highest expression of Zen. The principle behind Ryoanji’s garden is that while you are seated on the deck of the Hojo and look out towards it you will only be able to see 14 stones from any angle at one time. According the Buddhism the number 15 represents completeness, which means that to complete your experience at Ryoanji you should see all 15 stones yet this is not possible under the conditions of our world.

Zen gardens are unique as they do not merely represent landscapes, they express certain feelings and thoughts through simplicity and serenity. Although they are generally meant to be viewed from a single viewpoint, Ryoanji, as mentioned before, challenges you to take multiple viewpoints to try and view all 15 stones at once.

Within the Kansai and Hiroshima region, okonomiyaki, is one of the most popular dishes and it can be found at many restaurants or food stalls. Okonomiyaki literally translates to “cooked to one’s liking” and is essentially a pancake consisting of batter, cabbage and various toppings and ingredients, such as meat, seafood and cheese.

Usually okonomiyaki are rather small, being about pancake size, yet at Jumbo they are more like large pizzas which you can easily share with two people. Costing only 700 yen it should be no surprise that Jumbo is very popular amongst students and families and tends to get very busy during lunch and dinnertime with people even waiting outside to have some of Jumbo’s amazingly delicious okonomiyaki. Apart from okonomiyaki, Jumbo also offers a large-sized portion of yakisoba, stir-frying noodles with vegetables and meat or seafood covered in a sweet sauce, for just 650 yen.

From Kyoto Station, Ryoanji can be accessed by taking the JR bus heading towards Takao or you could also head for Hanazono or Enmachi Station on the JR San-in Line and walk north for about 25 minutes. Alternatively, Kyoto city bus 59 coming from Shijo Kawaramachi makes a stop in front of Ryoanji or you could take the street car on the Keifuku Kitano Line to Ryoanji Station. For a minor fee of 500 yen Ryoanji is open to the public between 8:00 and 17:00 in the months from March to November and between 8:30 to 16:30 from December to February.

It is also a good idea to visit Kinkakuji and Ninnaji, which are located about a 5-to-10 minute walk on either side of Ryoanji, while you are in the area.

Jumbo is located about 10 minutes from Ryoanji along road 101 directly south of Tojin Station on the Keifuku Kitano Line right next to the Kyoto City Bus 26’s bus stop “Toji-in Minamicho”. The restaurant is open from 11:00 to 14:00 and 17:00 to 23:00 on Wednesdays until Sunday.