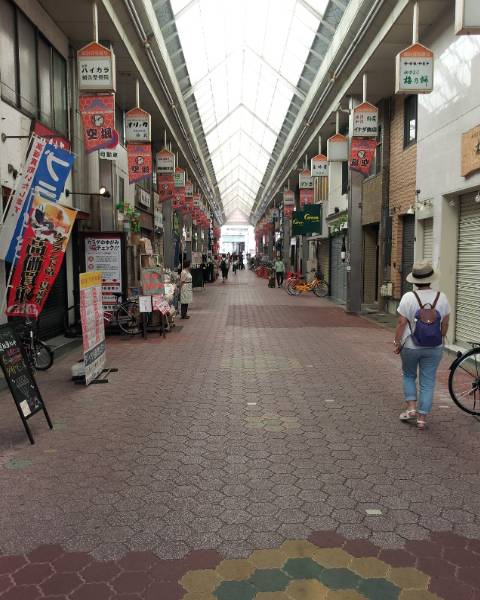 One of the interesting things about Japan are the shotengai—which are a type of single-storied, covered mall. Unlike traditional malls however, some of them run in straight lines for a few city blocks, while others may contain a number of arteries. They are so singular in fact, that you might find one or two that actually cover much more than just a few blocks. This means that at times you will find yourself waiting at an intersection for the light to change before you can continue with your shopping, or browsing as the case may be. It is also not uncommon to find entrances to residential buildings attached to these roofed shopping streets.

At first glance, you may be a little overwhelmed by the sheer number of restaurants and izakayas—Japanese pubs—that line the sides of the walkways. However, when you look closer, you will see there is actually a wide variety of other shops and establishments offering you quite a vast range of services and wares.

Located in the Chuo ward of Osaka city is one such shopping phenomenon known as Karahori Shotengai. It stretches from Matsuyamachi Suji to Uehomachi Suji—approximately three blocks long—which can be considered short for one of these establishments. Even for its small size, it does boasts three supermarkets, two drug stores, medical and dental clinics, cafes fruit markets, and of course izakayas, restaurants, and clothing stores.

I highly recommend a visit to the area when you are in Osaka, not because of the businesses occupying this shopping district, but also because of the unseen world around and behind the shotengai. What you might misinterpret as an alley leading to a dead-end can actually pave the way to quite a surprising discovery. For one thing, you would miss the fascinating assortment of eateries and other businesses that are outside of the shopping concourse. You would also bypass some very intriguing scenes and miss out on an opportunity to see what can only be described as a peaceful solitude existing behind this—at times—busy market.

When you step foot on that seemingly innocuous causeway, you get the sensation of stepping back through time. The houses are quaint, small and rustic. You can feel the generations pulsating from each structure. Walking down the narrow streets, one can get the sensation of life in a time of peace and tranquility now long gone, yet somehow still alive. It makes you wonder that if the walls could talk, what types of stories they would tell.

On one of my many excursions,I was taken through a maze of bicycle and plant-lined walkways which culminated in a type of courtyard. Standing before me was an old-fashioned watering well with the nostalgic hand pump. Immediately, memories from my childhood in my home country of Barbados rushed back and it was then that I realized what had ignited my attraction for this beautiful country. Almost everywhere you look, you can see a mesmerising mixture of old neighbourhoods and new complexes coexisting in harmony. Of course, these scenes may not trigger feelings of nostalgia in everyone, but they definitely will appeal to those with photographic instincts or just simple adventure seekers.

On another such adventure, I was pleasantly surprised to see a newly constructed home nestled in between two older units. The truly fascinating thing about this encounter was that the new complemented the old and vice versa.

There are more than just houses and courtyards to be found hiding out of the way. There are also many ojizou san—which are a type of very tiny shrine. There are beautiful floral settings which appear as though to be growing wild, but in truth can only have been cultivated by very loving hands.

It is very easy to become addicted to venturing off the beaten path when visiting Karahori Shotengai. I have been there many times, and on each visit I find myself being drawn behind the shops to a fascinating world with many stories waiting to be told. Always I find something new to appease my sense of curiosity; appease, but never satisfy so I continue to return and listen to the tales that the area has to tell. Incredibly, I continue to be surprised at discovering some new aspect that I had missed before.
Of all of the places that I’ve visited, nothing has given me the feel of home, than walking behind Karahori Shotengai.

Getting there from Osaka Station

It is quite easy to get to Karahori Shotengai from Osaka Station. Simply take the Tanimachi subway line to Tanicachi 6-Chome Station, then exit #4, turn right (south) and it is approximately a 2 – 3 minute walk away.

During the week, the district fully awakens by 9:00 am, but naturally depending on the nature of the business, some will open earlier than other. Likewise, you will find that the restaurants, izakayas and supermarkets will remain open longer than say, the drugstores, but the majority of the other establishments will close for the day by 9:00 pm. Sundays being the only exception in which you will find many proprietors closed for the day.

Open with Maps
Written by: Sylvester Pilgrim
Filed under: Living | Things to Do
Tags:
Sharing