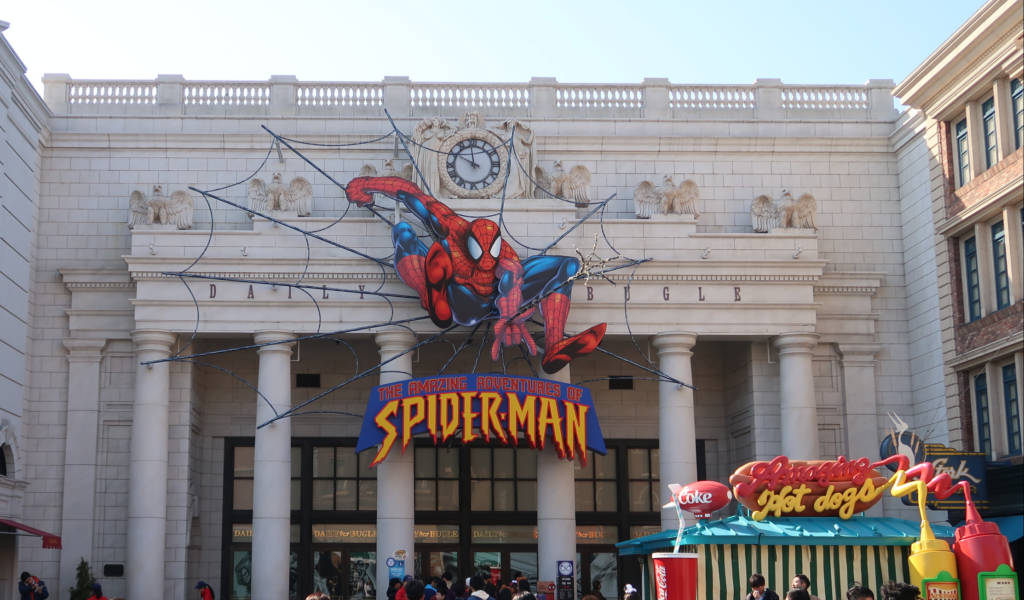 A Double Bill of Excitement: Universal Studios Japan and Harukas 300

In a move presumably aimed at thrillseekers, Universal Studios Japan (USJ) and Harukas 300, Japan’s biggest skyscraper, are working together to make Osaka’s most breathtaking attractions more accessible to international tourists.

You’ll want to buy different tickets depending on what you want to see. There are far too many variations to describe here, but basically there are two ticket types: Studio and Express passes. The basic Studio Pass allows entry to the park, and most of the attractions—but you’ll have to wait in line for every ride, usually between 45 minutes and couple of hours.

Express Passes allow you to skip the wait for some of the park’s most popular properties, including Harry Potter, Minions, Jurassic Park, Jaws and Spider-Man. Be sure to double check you’ve ordered the right tickets—you’ll still need that Studio Pass even if you’ve paid for Express Passes for some rides.

USJ boasts many of the heavy hitters from the Hollywood location, as well as a few features unique to Japan, including Universal Cool Japan, Hollywood Dream The Ride Backdrop and Universal Wonderland, featuring kids’ favorites like Snoopy, Sesame Street and Hello Kitty.

The Wizarding World of Harry Potter

Unsurprisingly the most popular area of the park, crowds rush to get in as soon as the gates open. There are as many merchandise shops as you could shake a broomstick at, as well as high-profile rides like Flight of the Hippogriff and Harry Potter and the Forbidden Journey. You can even (rather perversely, if you’ve read the books) choose your own wand.

This seasonal promotion brings together some of Japan’s biggest anime properties. In spring, there are Lupin III and Detective Conan attractions. In summer, you’ll see Evangelion vs. Godzilla, as well as Sailor Moon and Attack on Titan attractions on the roster. Fair warning, waiting times exceeded three hours when I was there in late February.

The logical conclusion to the world’s infatuation with Minions. Become a Minion yourself on the impressive Minion Mayhem ride, or just enjoy a bucket of banana (get it?) popcorn.

You can fly with pterodactyls or take an ill-fated cruise through Jurassic Park in this area. Getting in line as a single rider for Jurassic Park the Ride can shave as much as an hour off your wait, so if you’re willing to sit next to a stranger, you’ll save a lot of time.

A classic import from the US locations. As best I can tell the aim is to help New York hero J. Jonah Jameson in his quest to apprehend the city’s masked menace, Spider-Man. Again, the lonely line is where it’s at.

Getting to Universal Studios Japan in Osaka

From Shin-Osaka Station, take the Midosuji or Tokaido Sanyo Line to Osaka Station, then hop on the Loop Line to Universal City Station. From Kansai international Airport, the easiest way is to catch the direct Limousine Bus, which costs around ¥1,550, and takes roughly an hour and 15 minutes. Getting the train is a little more involved, but can save you up to ¥450. There are other ways, but the simplest is to take the Kansaikuko line to Nishikujo, then change to the Sakurajima Line.

Our partner offers free access to Harukas 300 when you purchase a USJ pass. You’ll also be able to pick your USJ tickets up from Harukas, saving you time at the park. As an added bonus, you’ll be given a code displaying the park’s actual opening time on the day, and ushered in slightly ahead of the crowd through a special entrance. Plan ahead, and you can basically walk straight onto the most in-demand ride of your choice.

Abeno Harukas is the tallest building in Japan (apparently Tokyo Tower and Skytree are “structures”, for all you pedants out there). It’s an impressive piece of construction inside and out, with just about every convenience you could want, but the real attraction starts once you’ve ridden the space-age elevator up to the 58th floor. Between the 58th and 60th floors, you’ll find 360° panoramic views of Osaka from a height of around 300 meters (nearly 1,000 feet).

If you’re a smoker or you have a bladder, you may be excited to learn that the building also has what could well be Osaka’s most scenic bathrooms and smoking area.

Some of the best views are at night. So if you don’t mind the crowds of teenagers setting up time-lapse photos, it’s well worth visiting Harukas in the early evening to watch the sun lighting up Osaka Bay in hues of red and gold.

When darkness descends, visitors are treated to a projection mapping experience called “City Light Fantasia”. This mostly involves a psychedelic flying child riding some kind of fish (or mammal, marine biologists leave me alone) over the Osaka skyline. Even without the projections, seeing the lights of Osaka (and the sheer number of people they represent), stretch out into the distance is a sight to behold.

Tickets usually cost ¥1,500, but you can save ¥235 if you (currently unavailable). If you don’t buy them online, it may be more expensive during special events—such as the Tenjin Matsuri and Yodogawa Fireworks viewing parties in late July/early August.

If you’re a junkie for heights or fancy facing your fears, this attraction allows you to go onto the rooftop and lean over the edge of the building for ¥1,000. Unsurprisingly, there are tethers and harnesses up the wazoo—so if you’re feeling confident you can stretch yourself in any direction as far as you like without (too much) risk. For obvious reasons, you won’t be able to dangle your camera or phone off the edge, but the crew will take a commemorative photo of you at no extra cost.

There’s an open-air café/bar space on the 58th floor, with great views of the city. You’re probably best off saving some stomach space for Osaka’s famous culinary wonders (nearby Shinsekai is a Cheapo favorite). That said, their most popular item is pretty good—pineapple ice cream mixed with crushed Pine-Ame pieces, an iconic Osaka candy from the nearby factory.

This building overlooks Tennoji Station, conveniently located on the Osaka Loop and Midosuji lines, making it easily reachable from just about anywhere in the city. Once you leave the station, just look up. If in doubt, keep an eye out for “Abeno Bear”—the building’s loveable/slightly creepy mascot.

For those planning to travel more widely in Japan, it’s worth considering a JR Pass. These discount rail passes are only available to foreign tourists, and provide substantial savings.