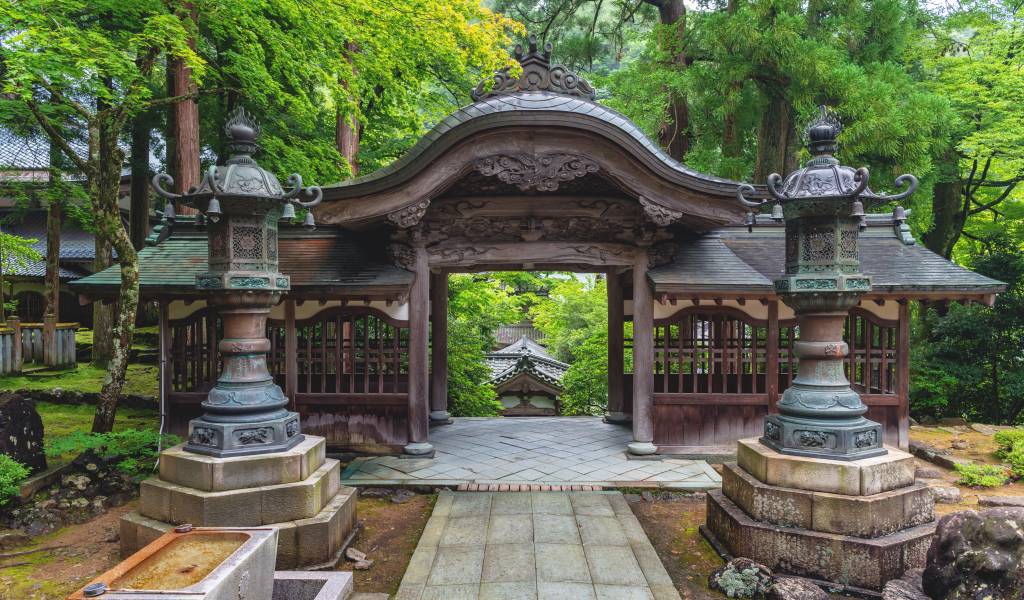 See the Monks at Eiheiji Zen Temple in Fukui

Nestling a thick mountainside forest with Buddhist monks silently passing by, Eiheiji Temple is a quintessential Japanese experience. The sense of calm, the stunning beauty, the confusion about exactly when to wear shoes, slippers or just socks: it’s all here.

The history of Eiheiji dates back to 1244, founded by a Buddhist monk called Dogen Zenji who was responsible for bringing Soto Zen Buddhism to Japan from China. The current complex of over 70 buildings ranges in age from 1749 (the Sanmon, or main gate) to a very modern building (Kichijokaku) for visitors and administration. The buildings—all connected by covered walkways—seem to pop up naturally among the trees, as though they’d grown rather than been built.

Eiheiji is a working monastery. Monks live, eat, sleep, wash and pray here, and you’ll see many of them walking around. If you can time your visit to reach the 19th-century Hatto building for when there’s a service, you’ll hopefully get to witness the full power of drumbeats and chanting. We turned up at 11 am and experienced a good 20 minutes of chanting so fast and intense it wouldn’t have been out of place in a trance club.

What can you see at Eiheiji Temple?

First thing is to buy your entry ticket. There’s a machine by the doorway with signage entirely in Japanese, but look for the appropriate price (500 yen for adults, 200 yen for children) and it’s relatively straightforward from there. Take off your shoes, place them in a plastic bag (you’ll have to carry them with you) and put on a pair of slippers—and then almost immediately take them off to cross the tatami mat of a room where a monk gives a brief explanatory lecture in Japanese. Skip this if you like and head straight to the reception hall (Sanshokaku), which has an elaborately painted ceiling.

At this point you can turn left and head up towards the Hatto, but we recommend lingering for a while underneath the Sanmon and gazing at the gardens, forest and surrounding buildings. Breathe in the fresh air and adjust your mind to being completely, well, zen.

There is a route planned out for visitors but there’s nobody enforcing it, so you’re free to explore the various temple levels at your leisure. Make sure to see the Sodo (monk’s training hall); Butsuden (Buddha hall), which is dripping in gold; peaceful Joyoden (Founder’s Hall) where the ashes of Dogen Zenji rest; the Hatto; and the Shidoden (Memorial hall) which contains thousands of memorial tablets for lay followers.

All pathways go through covered corridors, which is very helpful in this part of Japan since it can—and does—snow and rain heavily. Eiheiji is particularly beautiful in the rain and from the Hatto, at the top of the temple complex, you may be able to watch water vapor rising off the trees if the sun manages to come out.

It’s possible to stay a night at Eiheiji and live like the monks. You bathe, eat simple vegetarian meals, have a guided tour and learn about the temple’s history, take part in the morning service and participate in two sessions of zazen (sitting in contemplative silence; one session happens before 5 am and a monk will poke you with a stick if you fall asleep!)

It costs ¥9,000 and you must apply for your stay at least one month in advance. It’s also dependent on there being an English translator available. More information can be found on Eiheiji’s website.

How to get to Eiheiji Temple

Buses leave Fukui Station to Eiheiji roughly once an hour between 8:45 am and 2:50 pm. The tourist office on the west side of the station can provide timetables, and the buses actually leave from the east side of the station. The journey takes half an hour and costs ¥720 for adults and ¥360 for children each way (yes, it does cost significantly more to get to and from Eiheiji than it does to actually get in!).

You’ll be dropped off outside a small restaurant a short walk away from the temple. Someone from the restaurant will probably meet you, lend you an umbrella if it’s raining and explain that return tickets are bought from them when you decide to go back to Fukui. (Factor in a wait if you need to buy your return ticket at lunchtime.)

There’s more to than Eiheiji Temple in the area though—read our guide on what else to do in Fukui.