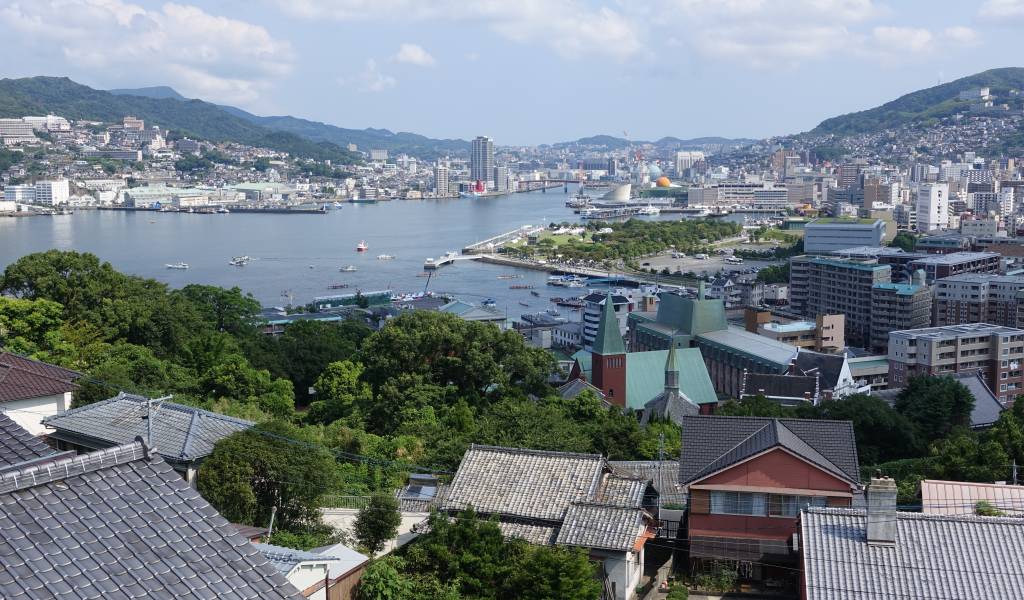 With all the notable places in Nagasaki (including the Peace Park, Dejima and Gunkanjima), it’s almost a surprise to find out that Nagasaki’s most popular attraction is a garden.

Glover Garden is located in a stunning setting on a hillside in Nagasaki’s Oura district facing its fjord-like harbor.

The garden was built in honor of Thomas Glover, a Scottish trader who came to Nagasaki as a young man as Japan was starting to open up to the outside world. The young Scotsman supplied weapons to the anti-shogun Satsuma and Choshu clans, who promptly overthrew the world’s longest continuous dictatorship and ushered in the Meiji restoration, which saw the rapid modernization of Japanese industry and society. If the shogunate forces had come out on top, Glover would probably be remembered as a British imperialist meddler rather than one of the formative influences of modern Japan.

Luckily for Glover, he picked the right team and was able to profit as a result. As an industrialist he is credited with opening Japan’s first coal mine on the island of Hashima (AKA Gunkanjima or ‘Battleship Island’) as well as playing a part in the foundation of corporate giants Kirin Breweries and Mitsubishi Corporation.

With his wife Tsuru Awajiya and adopted son Tomosaburo Kuraba, he lived a large part of his life in the Glover Mansion which is situated within the garden. The interior and furnishings have been restored to how they might have appeared in the 1860s.

The garden itself is (not surprisingly) European in character with a series of terraces linked by moving walkways which take visitors to the former Mitsubishi second dock house at the top of the property.

Although the entrance price of ¥610 is a little on the high side for a garden, you can easily wander around here for a couple of hours.

During the warmer months (from mid July until early October) the garden is open from 8am until 9:30pm. Otherwise, it closes at 6pm—except for a few days before Christmas and a two-week period in spring when the garden is open until later in the evening.

Getting to Glover Garden

Glover Garden is located in the southern part of Oura—on a steeply sloping hillside next to the historic Oura Cathedral. Even for those of below average fitness, it’s an easy walk from the more central Chinatown area along Oranda Dori (Holland Dori) to the bottom of the cobblestoned Dutch Slope. From here, you can wander through the foreign settlement—the various attractions are well signposted in English.

Alternatively, you can catch a tram to either Oura-tenshudoshita Station or to Ishibashi Station at the terminus of the green line. If you get off at Oura-tenshudoshita, then you can enter the garden through the main lower entrance. If you get off at Ishibashi Station, follow the signposts to “Glover Sky Road”—a curious elevator that travels up the hillside like a cable car. From here, you can either enter the Garden via the back entrance and descend from the top of the garden, or (if it’s closed) skirt around the garden and neighboring Oura Cathedral to the main entrance.

It’s easy to spend an entire day wandering around Oura/Yamate. Aside from Glover Garden, there are various European-style buildings, the aforementioned Oura Cathedral, the Oura International Cemetery, the incredible views and just the unique ambiance.

Europeans weren’t the only residents of Oura either. There was a large Chinese population who built the Nagasaki Confucian Shrine in the center of the neighborhood, 200 meters to the north of Ishibashi tram stop.