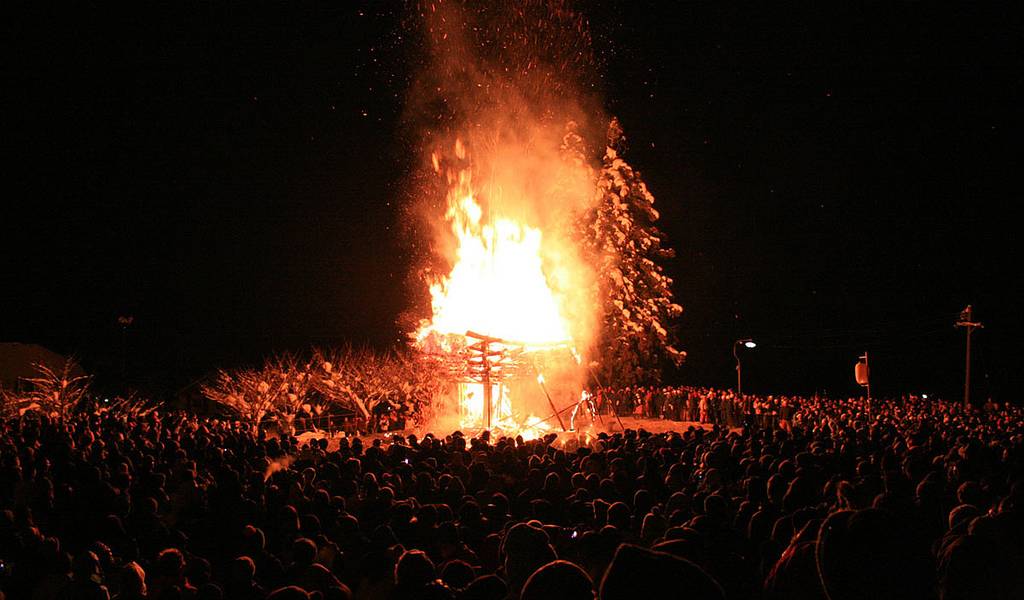 Bamboo spears, speeding carts and log-riding are just some of the activities you can see at some of the death-defying celebrations in Japan.

It’s not all beautiful dance parades and eye-catching costumes in Japan—sometimes things take a more serious turn. From men riding speeding carts through city streets to other riding logs down mountains, here are some of the celebrations that often end in loss of life and limb…

Considered to be the most dangerous festival of them all, Onbashira takes place once every six years and multiple fatalities are common. Based on the seemingly simple premise of replacing sacred trees in the grounds of the Suwa Shrine, the men of the area take the tree-transportation as a means of proving their bravery (and sometimes their mortality).

The festival is divided into two sections: Yamadashi which takes place in April, and Satobiki which follows in May. During the first section, trees are selected and cut down before being pushed, pulled and dragged down slopes and across the river until they reach the town. As the trees are pushed down steep slopes, teams will jump onto them, with the most honored positions being at the very front, right as it tips over the edge of the slope. Watching this is literal car-crash entertainment (take it from me), as people seemingly disappear beneath the moving wood and how multiple people are not trampled to death is a mystery worthy of Sherlock himself. The water section is equally as hair-raising, and in 2004 two men died during this section.

Surprisingly, although the first section is the most intense, and has multiple injuries, it is the second half which has resulted in more of the deaths from previous years. During Satobiki, the trees are carried through streets in a merry procession before reaching the shrine grounds. Here, they are erected using traditional rope-techniques and although harness regulations have been introduced following previous deaths, few men wear the harnesses as they cling to the tree and try to release the ropes when it is fully raised. In 2016, a local man was killed after falling 40-feet without a harness, and two more died in the same manner in 2010.

When: Held every 6 years in April and May, the next festival will be in 2022.
Where: Near Lake Suwa in Nagano Prefecture

While plenty of festivals have wooden carts called Danjiri, not all of them are ridden at top-speed through the streets with men balancing precariously on top. They like to do things in style in Kishiwada though, and speed is the name of the game when it comes to their annual two-part festival.

The first part takes place in September and the second in October, and while the former is more famous, the latter actually has more carts. Taking place in what is normally a quiet suburb in Osaka, the festival dates back to 1703 and is the most famous of the many Danjiri festivals in Japan. Held to pray for a good harvest in the coming year, the festival was created by the Lord of Kishiwada castle. In the evenings, lantern parades are held through the streets and the carts are an incredible sight when adorned with lanterns.

The danger comes of course, as the men cling to the sides and balance on the top of the speeding carts, often thrown off when corners are turned. You’ll be glad to know there are braking systems on the carts: two wooden poles are carved to match the wheel’s curve and wielded by official breakers. There is also a metal emergency brake on the front for emergencies, as well as special shoes and ridges on the top of the carts to help the riders with their grip. Despite this, fatalities and injuries are not uncommon.

When: The festival is now held on the weekend before Respect The Aged Day, which is the 3rd Monday in September
Where: Kishiwada Castle, Osaka.

Described as havoc with bamboo sticks, this is one of the more intense endings to what is generally a more normal festival (and the one you probably least want to participate in). Following a few days of normal celebrations and festivities where snow huts are built and adorned with flags, on the final day things take a more serious turn. While injuries in the aforementioned festivals seem to be an unfortunate accident, here they are the aim of the game.

Divided into two teams: “North vs. South”, the men of the city down plenty of sake and proceed to battle it out in three rounds to claim the title of winner. If the North side wins, the rice harvest will be successful and if the South wins, the price of rice will go up, so it’s win-win. This does nothing to de-intensify the fighting though, which begins with two rounds of simple smacking and thwacking with bamboo sticks aimed at legs and arms. For the final round, however, the poles are set on fire and the fight becomes a full-on fiery death-brawl. Recently, participants have been required to wear helmets, meaning there are fewer facial stabbings and more football-style riot scenes.

When: February 11th – 15th each year
Where: Rokugo in Misato, Akita Prefecture

These festivals don’t often have fatalities, but if you ever get the chance to watch them this will come as a surprise!

Originally a New Year celebration, this festival was moved to March to allow for a bigger and more impressive event. In the months before the festival, the 13 surrounding neighborhoods will spend time, money and effort creating some of the most impressive floats to represent their area. Made from a 2m tall pine torch made from straw with a 3m bamboo pole covered in thousands of strips of red paper, the sagicho are paraded through town as the locals vote for the most impressive. When they reach Himure Hachimangua Shrine, a poll is taken to determine the winner and the successful area can celebrate the payoff of their hard work.

So far, so safe… right? Well, how about if everyone decides to set all the beautiful floats on fire, as they fight with them? Yeah, there’s the danger factor you were looking for. So, as the night darkens, teams will set their floats down in the center of a designated fire area and ceremoniously battle each other with them and then dance around their burning embers. Due to the battles, the risk extends to the spectators too, so if you attend and get up close, watch out!

When: The festival is held on the 3rd weekend in March
Where: Omihachiman in Shiga Prefecture

Fire is a common theme in the most dangerous festivals, and while many feature bonfires or burning torches, few involve placing men on top of a burning pyre until it is almost too late to save them. Welcome to the annual Nozawa Fire Festival (also known as the Dosojin Festival) held in January each year; it is one of the biggest fire festivals in all of Japan. Surrounded by snow in the popular skiing resort, the festival is a traditional New Year ceremony and involves a battle between the 25- and 42-year-old men in the village as these ages are considered unlucky.

After plenty of sake (a common theme you may have noticed), the older team climb to the top of a giant pyre-like tower made of straw and sticks, and the younger men form a defensive ring around the structure as the rest of the men in the village try and storm the tower and set it alight. As seems obvious to those not smashed on sake, this is inevitable and doomed to end badly, as the men eventually have to bail out and flee the structure before it is too late.

When: January 15th every year
Where: Nozawa Onsen, Nagano

Have you been to one of Japan’s deadliest festivals? What was your experience?