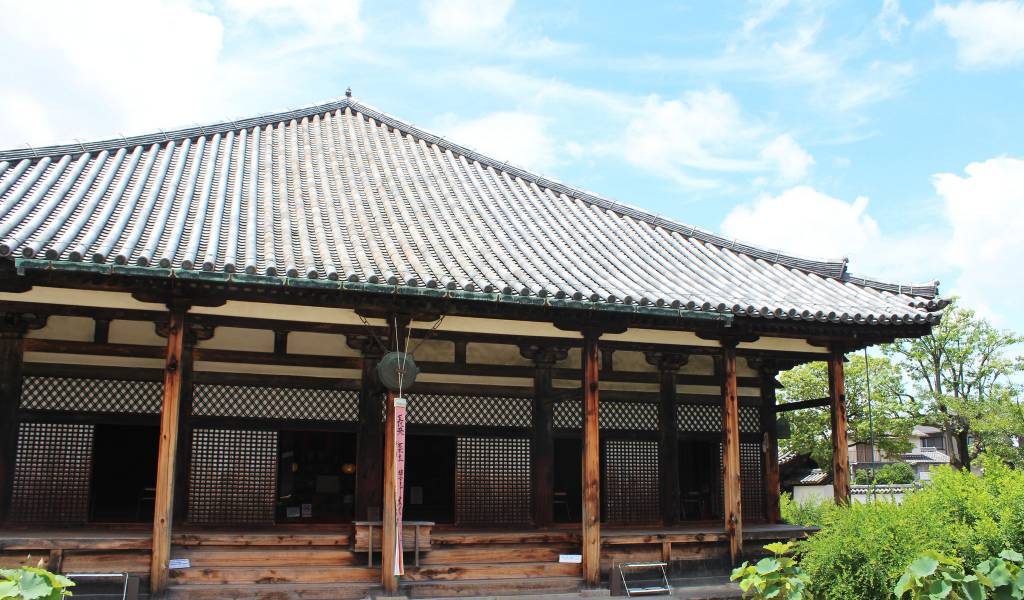 Stumbling into Nara's Past: Gangoji Temple and Edo-Period Charm

The small former merchant district of Naramachi does its best to preserve its Edo-period atmosphere and charm to this day. When I first walked along the main streets in Nara, it seemed that not much remained of its past—apart from its temples—as most residential buildings had been torn down to make room for today’s modern concrete multi-story buildings. That was until I accidentally stumbled into Naramachi.

Gangoji, one of the seven greats

The district’s story, however, does not begin in Nara itself but rather 25 kilometers to its south in what was once Japan’s capital city, Asuka. At the heart of Asuka stood Asuka-dera Temple, which is generally regarded as Japan’s first temple, but was moved to Nara in the late 8th century after the capital changed from Asuka to Nara.

There the temple took on a new life and name, Gangoji Temple, to become one of Nara’s Seven Great Temples. In its heyday the temple grounds were truly enormous, encompassing dozens of halls and side buildings with hundreds of monks and worshipers going about their business. Although it remained prominent for centuries, two fires in the 15th and the 19th century brought an end to this. Nowadays, only the Gokuraku-do Hall remains of those days. Gokuraku-bo, the former monks dormitory, with its white-plastered walls and black roof tiles similar to Korean architecture has been converted as its temple instead.

UNESCO recognized Gangoji’s historical and cultural importance as World Heritage Site. The temple opens it doors to the public from 9:00 to 17:00 with a last admission at 16:30 throughout the year for a minor fee of 500 yen per person. To get there its best to stroll along Naramachi’s main street and then head towards the famous 5-star Nara Hotel as Gangoji is located on the southeastern edge of Naramachi.

The temple’s vacant grounds became home to Naramachi in the Edo-period as merchants and artisans started to settle in the area. The picturesque townhouses with their white-plastered walls, wooden beams and black-tiled roofs brought people back into the area and it steadily became the commercial and industrial heartland of what was then known as Yamato Province.

A typical townhouse in Naramachi is quite narrow but long in depth and has one or two floors. The ground floor is used for business as the store while the top floor or the rear of the house serves as the the merchants’ or artisans’ home. The tatami mats covering the wooden floors and shoji sliding doors to divide the home’s rooms are a typical feature of the architecture dominant at the time. To preserve this distinct charm, today’s townhouse owners are required to maintain the houses in conformity with this style of architecture.

Owners, in fact, tend to even go a step further and have even chosen to retain much of the traditional products artisans used to make. From a small sweet rice cake shop to a cozy café or souvenir shop with handmade items, Naramachi lets you stroll back in time for a laid-back afternoon.

Two buildings I found to be particularly interesting were the Koshi-no-Ie Residence, also known as the Naramachi Lattice House, and Nara’s Craft Museum. The former is a great example of a traditional townhouse and is open to visit for free every day from 9:00 to 17:00 except for Mondays and around New Year. The Craft Museum is also free to visit on the same days from 10:00 to 18:00 with a display of top-quality calligraphy utensils and other Nara-based products.

Nara
Written by: Bjorn
Filed under: Things to Do
Tags:
Sharing