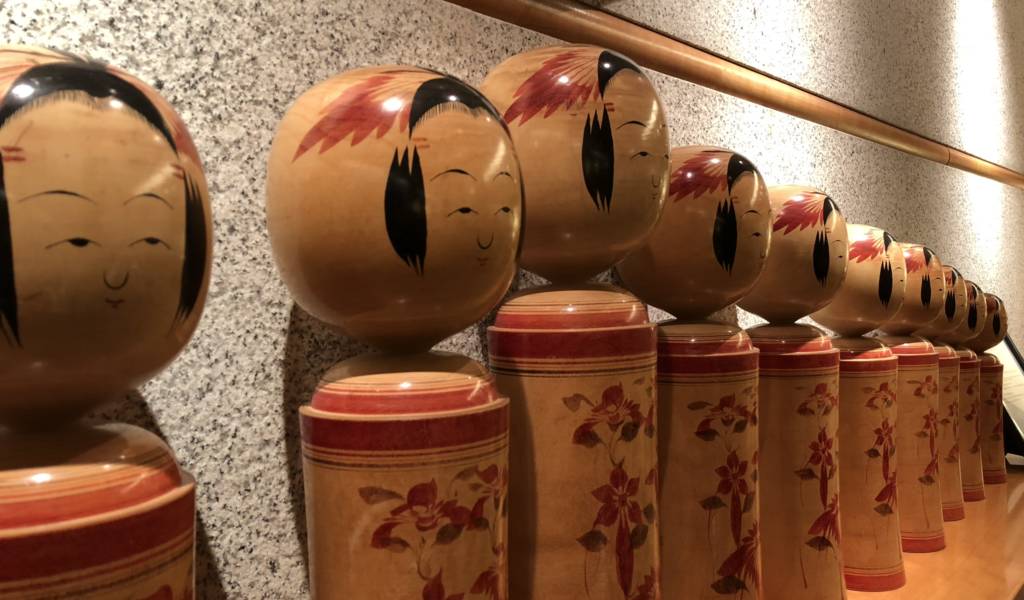 These days, it’s tough to go “off the beaten track”, as even the roughest, most hidden of paths have been pounded smooth by masses of tourists. However, a few roads remain less traveled—and the one that leads to Naruko Onsen is a good example.

The tiny mountain town (hamlet, really) in northern Miyagi Prefecture sees its fair share of domestic tourists (who mostly roll in for the autumn scenes), but has not yet made it onto many international tourist itineraries. The trains that take you to Naruko Onsen from Tokyo are far from full, and the streets are quiet save for the sound of gurgling water from the hot springs, and the odd taxi. It’s a place you can go to soak up rural charm and experience a less changed, more traditional side of life in Japan.

When I stepped out of the sleepy train station, the first thing I spotted was a multitude of wooden dolls. They featured in the streets, on the signboards and even on the manhole covers; their faces and decorative patterns similar yet—like many arts and crafts in Japan—determinedly individual. Though omnipresent, the limbless dolls, known as kokeshi, didn’t immediately blow my mind—I largely ignored them, together with the strong smell of sulfur in the town, as I headed to my hotel.

But the deceptively simple kokeshi creations were not to be disregarded, and just before the end of my visit, during an unexpected kokeshi-painting experience, I came to appreciate the skill, effort and energy that goes into each and every doll. (Side note, my doll came out looking weirdly like my mother, and I’m still not sure how I feel about that.)

The dolls, which are usually small enough for kids to play with or for adults to display on shelves, call the Tohoku region their home. They are handmade (every last one of them) by craftsmen who have been passing down the technique for hundreds of years (kokeshi are thought to have made their debut during the Edo era as souvenirs for people visiting hot springs).

There are regional variations in kokeshi dolls, with the dogwood type found in Naruko Onsen apparently the most prolific—a short walk down the main drag (Kokeshi Street) will reveal why this is not surprising.

Kokeshi craft shops line both sides of the road, lathes whirring as their mostly elderly operators do what they’ve been doing all their lives. This article gives an overview of what the dolls mean to the town and where best to see (and buy) them.

The primary thing that Naruko Onsen is known for, though, is its onsen. Dotted among the buildings and easily accessible on a stroll, you can find free foot baths (caution: may cause lobster syndrome of the shins) and even a hand bath—something I’d never heard of before. Who knew that soaking your hands in a wooden tub of hot (hot hot hot) water could relax the entire body?

Bigger baths can be found at all of the major hotels in the area, with men’s and women’s sections swapped once a day (usually in the early morning) so that you can simmer in every tub. You (and your skin, for days afterwards) can’t escape the sulfurous whiff; while it’s not considered dangerous in small doses, you may find your eyes and nose get slightly irritated—and any cheapos with respiratory stuff going on might want to test the waters, so to speak, before immersing themselves.

Just a couple of kilometers from the town is a sight that’s certainly worth beholding. Naruko Gorge, considered one of the prime spots for autumn leaf viewing (October to early November), is a ten-minute ride by taxi (necessary in snowy or very wet weather, when walking is tricky) and a great place to have a cup (well, bottle) of tea.

There’s a small rest house in the parking lot and plenty of viewpoints around the edges. In good weather, you can follow one of the hiking trails down and around the gorge (just check to see that they are open; sometimes rockfalls see them being closed).

On the way back to town, you can stop off at the Kokeshi Museum (closed for winter, open from April).

Where to stay and how to get there

I opted to stay at the Naruko Hotel, a traditional Japanese inn that’s been accommodating visitors since 1873. When I say traditional, I mean really traditional—you won’t find it on Booking.com, and there isn’t much English support. If you can speak the vernac, I would suggest checking the hotel website for special deals (I got two nights and five full meals for ¥20,000). If not, you’re probably better off making a reservation at Hotel Oogiya or Hotel Yumoto Kissho (or one of the others listed nearby).

While staying at least one night (two is more than enough) is recommended, it’s also possible to explore Naruko Onsen as a day trip from Tokyo. To get there, you take the Yamabiko bullet train to Furukawa Station (just over two hours from Tokyo, or 12 minutes from Sendai), and then transfer to the JR Rikuu-East Line, which will have you at Naruko Onsen (written as Naruko-Onsen on train maps) in about 45 minutes.

Good news for international visitors: you can use a JR Pass for the excursion.

Without discounts, you’re looking at a total of around ¥24,000 for the round trip. It’s possible to save money by using slower and cheaper trains, for example with the Seishun 18 ticket.

This post was orginally published in February 2018. Last updated in November 2020.