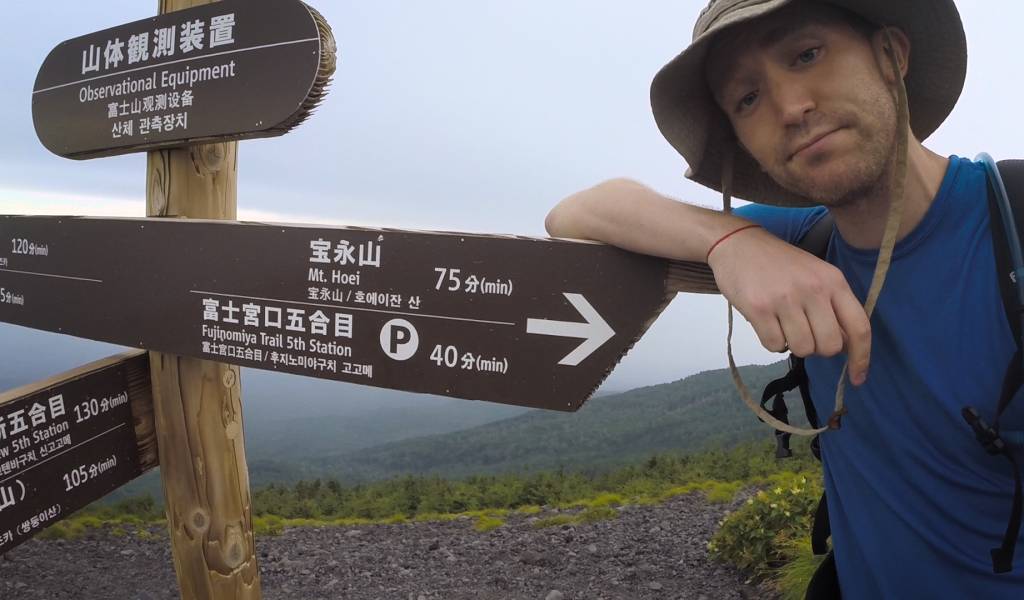 We got to chat with “Happy in Japan” Youtuber Andrew Marston about his Mt. Fuji climb with fellow adventurers Axel and Andy. Their ascent comes with a twist though. Instead of the typical 5th station commencement, they went from sea to summit—a hike close to 30 hours in length and 3776 m in elevation. And if you thought concentrating on just getting to the top would be hard enough, know that they filmed their arduous and epic journey—and you can watch it below!

Please tell us a bit about yourself and the “sea-to-summit” gang.

We all met while living in Singapore from 2013-2015. We were all connected to the same international school and also had a monthly board game night at my place.

> Myself (Andrew) – I’m a graphic designer and wannabe YouTuber in Nagoya where I live with my wife and several house plants. I used to live in Japan from 2009-2011, ending my time by cycling the length of the country one month after the big earthquake to raise relief aid. Here’s a link to the documentary about that trip. My wife and I moved back to Japan (hopefully permanently) June of this year.

> Andy (Captain Falcon in the video) – Former engineer, now a high school physics teacher. He’s one of the most active people on the planet and does rock climbing, slack lining, running on a regular basis. Currently he is taking the year off to travel around Asia. When he decided to tour Japan, I knew this was the best chance I would have to assemble an elite team to climb Mt. Fuji sea to summit.

> Axel – He is a teacher at an international school in Tokyo where he moved this past summer. This is also where his wife grew up.

What brought you to Japan?

Originally, a deep and burning love for anime and ramen noodles. I first came in 2009 only days after graduating from university in the US. I only a had hiking backpack full of all my stuff and the hope of finding a job. Eventually I found an English teaching position in Fukuoka. During this time I fell in love with Japanese culture and society. I moved back to the US from 2011-2013, then to Singapore from 2013-2015. The whole time I wished I was still in Japan. Finally, I’m back and hopefully my wife and I will be able to live here for a long time to come.

What inspired your decision to climb Mt. Fuji from sea to summit? What did you hope to experience?

I heard from my friend Dylan (one of my teammates from Japan by Bicycle) that he had climbed Mt. Fuji sea to summit. My mind was blown. I had climbed Fuji from the 5th station like everyone else two times before, but  I didn’t know that people attempted to climb ALL of it sea to summit. As soon as I heard that such a route existed I knew I had to try it too. One of my favorite things to do is take epic adventures in Japan and climbing the most epic mountain in the most epic way certainly qualified.

What was the best part of the climb?

For me, going on an adventure and doing something epic with two of my good friends was the best part. There was a lot of comradery and the we’ll all be able to look back and tell stories about the time we pulled a double all-nighter to climb the tallest mountain in Japan together.

Also, anytime we would sit and one of the many chocolate bars in our packs was nice.

What did you find most challenging about your adventure?

There were several things that stick out as difficult. Right at first, we could find the beach where we intended to start, but in the dark it took us about 20 min to find a path that lead all the way to the water so we could fill our water bottles with sea water (to be dumped out at the peak… the Internet said it’s a tradition so we decided to do it).

During the first half of the trek, the humidity was the biggest challenge. It was the beginning of August and within an hour of starting we were all soaked with sweat. This made the walk really uncomfortable until we reach cooler elevations in the mid afternoon.

Also, as you’d expect, the last stretch of the trip was extremely difficult. After having walked for 20 hours, to arrive at the 5th station where everyone usually starts their Fuji climb was a bit de-motivating, but the physical drain of hiking for so long really set in around the 3000 m in altitude mark. Especially because of the thin air, every step was an effort. We were all stumbling forward on empty by the time we reached the monument at the top of Fuji. Also, Andy had a bad headache, was nauseous, and had trouble balancing. We think he got altitude sickness.

Why did you decide to film and share your climb?

Two reasons. First and foremost, hopefully this video along with Japan by Bicycle inspires a few people to challenge themselves and also gives them a concrete idea of an adventure in Japan they could take for relatively low cost that would potentially be a positive experience in their life.
The second reason is that I enjoy making videos of my travels around Japan. My professional training is in digital media production and my passion is to introduce people to Japan so whenever I have the chance to combine the two I take it. Not every video I make documents an epic quest though. People may be interested in my regular web series called Tour Japan which I upload to my YouTube channel “Happy In Japan”.

Was it worth it? Why should fellow climbers try this unique ascent?

It was 100% worth it! I would suggest other climbers try this if they want a real challenge. Although the terrain is never challenging, the length of this trek makes it a sincerely difficult hike.  Make sure to train beforehand and stretch your hamstrings often! Axel ended up straining both of his and had trouble walking for a month afterward.

Where’s the next adventure?

That’s a great question! I’m always looking for epic or legendary travel routes in Japan and would be eager for any suggestions. People can leave a comment on this article or send me a message on Twitter, my username is AndrewDMarston.

Right now, I’ve got my eye on cycling the Shinmanami Kaido that connects Shikoku and Honshu, then continuing on and doing the Shikoku 88 Temple Pilgrimage (四国遍路). I’m not Buddhist, but the route is legendary and I love Shikoku.

Also, this past summer my wife and I cycled from Tokyo to Kyoto finding each of the scenes from the famous “53 Stations of the Tokaido” ukiyo-e print series (東海道五十三次). I’m planning to edit and release that as a 6-part series on the Happy in Japan YouTube channel next year, probably sometime in the second quarter.

What advice would you give to those seeking unique or off-the-beaten-path experiences in Japan on a cheapo budget?

Practically speaking, the trips don’t have to cost a lot. This Fuji hike was free except for the cost to get to the beach at the beginning and return home afterward. On longer trips, to save on lodging costs I camp a lot and find hosts through a website called Couchsurfing. Many of my hosts and I still keep in contact and have become friends. Also, just like in real life, don’t eat at restaurants often. After 6 or 7PM most grocery stores start discounting items in their pre-prepared food section.

The hardest part is deciding you’re actually going to do the crazy adventure you’ve been dreaming about. I recommend, setting a date and inviting a few other friends to go with you so you can’t back out. Then show up at the start line on the date you set.

If anyone is seriously planning an adventure in Japan and has more questions, don’t hesitate to contact me. Twitter is the fastest way (username: AndrewDMarston).

Where can people find out more about you?

Open with Maps
Written by: Adriana Paradiso
Filed under: Things to Do
Tags:
Sharing