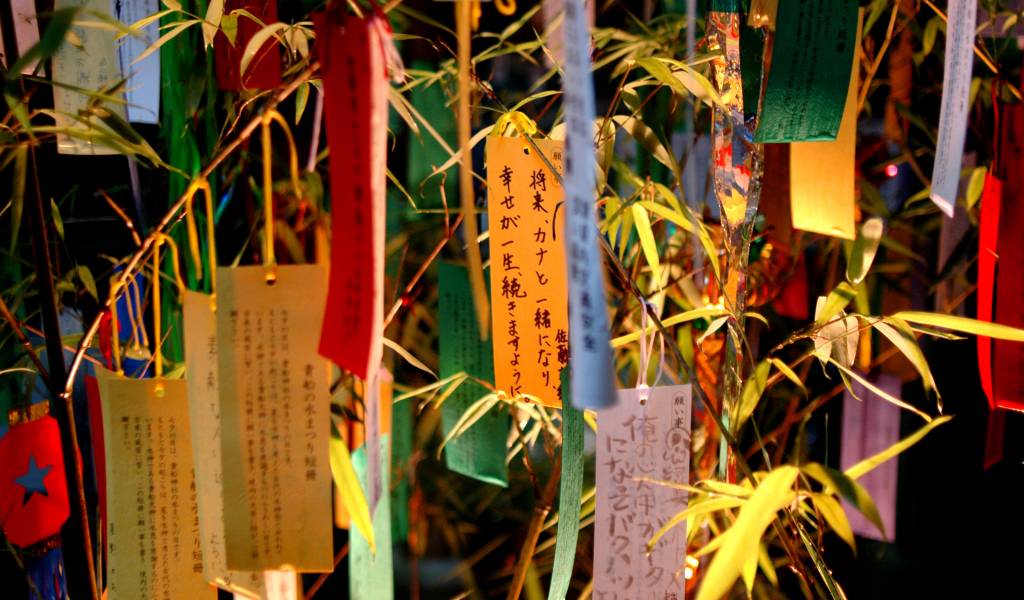 Celebrating the REAL Tanabata in Kyoto

You may think that Tanabata only occurs on the memorable date of 7/7 (July 7th). But the Tanabata festival was traditionally based on the lunar calendar, meaning that August is actually the “seventh month”. Since Kyoto is a traditional city, their Tanabata celebrations will begin in early August.

Orihime mourned the loss of her lover and eventually her father relented and allowed the two to meet once a year—on the seventh day of the seventh month. This day is Tanabata, and the Japanese celebrate by writing their wishes on strips of paper and tying them on bamboo branches.

Kyo no Tanabata is Kyoto’s Tanabata celebration in August. It is a free festival that takes place in two parts of the city—along the banks of the Kamo and Hori Rivers. 2017 marks the eigth year that this festival has run. It will run nightly from August 5th to 11th.

Typical Japanese festival staples like food stalls and yukata will abound, but so will a number of unique exhibitions and events. Both festival sites will feature illumination installations. At the Hori River site, festival goers can walk through a Milky Way tunnel made of bamboo and LED lights. The Ninomaru Palace in nearby Nijo Castle will also be lit up with projection-mapped imagery. At the Kamo River site, large bamboo baskets called furinto will hold lamps and wind chimes for a true summer sensation. A projection mapping installation will also be at the Kamo River site, but there it will be projected onto a wall of water, rather than a building.

Both sites will also exhibit local specialties. Artisans will wash traditional yuzen silks of excess dye in the Kamo River, while the Nishijin Textile Center at the Hori River site will showcase a yukata fashion show and hold a silkworm craft workshop. Both sites will have stalls selling local food specialties like peaches and wasabi.

For those keen to see Kyoto’s famed apprentice geisha—the maiko—both sites will have tea houses where visitors can (for an extra fee) watch maiko dancing while enjoying a drink. There are numerous stages that will hold multiple maiko performances every night of the festival. Other dancers and musicians will also be performing on additional stages across the sites.

Finally, it’s not a Tanabata celebration without a place to write a wish to hang on a bamboo tree. Both sites will have a number of bamboo installations to hang wishes on, and the event will sell original “Kyo-no-Tanabata Picture Postcard Strips” (¥100 each) for this purpose. At the end of the festival, the wishes will all be collected then sent to the heavens in a bonfire. The bonfire can be seen at Kiyomizu Temple.

One nice thing about Kyo No Tanabata is the good English support. An English website and pamphlet has been developed, and an English-language information stall is available at both sites. It’s clear from the crowds on the first night of the festival that it’s a hit with foreigners as well as locals.

So for a chance to cool down in the hot Kyoto evenings, put on a yukata (there are gifts for those in traditional dress!), grab a fan and take a walk along the rivers. Write a wish and enjoy the gentle breezes that make it flutter among the bamboo leaves. Take in the lights, sights and sounds of Kyo no Tanabata until Friday, August 11th.