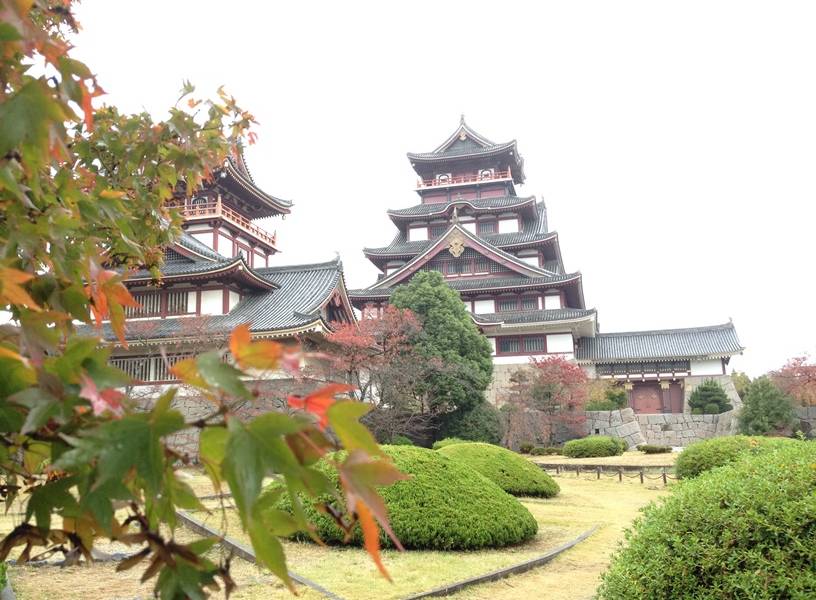 So you just visited Nijo Castle in the center of Kyoto, the famous Himeji Castle or the impressive Osaka Castle and still cannot get enough of Japanese castle architecture. Well, no worries—there is one more beautiful castle that is open and free to the public just a few minutes from Kyoto Station: Fushimi Castle (伏見城).

As the name might suggest, Fushimi Castle is indeed near the popular Fushimi Inari Shrine. The castle is also known as Momoyama Castle (“Peach Mountain”), named after the mountain where it was originally located, which was populated by—you guessed it—many peach trees. The current castle, however, was reconstructed in a different location, as the original location now encompasses the Imperial grounds of Emperor Meiji’s and Empress Shoken’s graves.

The castle’s tale is quite an unfortunate one throughout its history. It was founded in 1594 by Toyotomi Hideyoshi, who is most notable for leading the samurai invasion of Korea, to serve as his home upon his retirement. Fushimi has a strategically important location due to its position between Osaka and Kyoto and since Momoyama has a vast plain in front of it, any signal fires could be seen for miles. Interestingly, some readings suggest that Hideyoshi wished to construct the castle in order to tax the lords in the northeastern regions of Japan to fund it, as those in the southwest had already suffered financially to fund to expedition into Korea.

The castle did not last long as it was destroyed by an earthquake only a year after its completion. Shortly before his death Hideyoshi ordered another castle to be built which later was again destroyed in the decisive battle of Sekigahara. The battle marked the end of the Sengoku, or warring states, period and the rise of Tokugawa shogunate rule. Tokugawa Ieyasu set out to rebuilt it but changed his mind when he implemented his policy to only allow one castle per territory.

The reconstructed castle was not build until 1964 and served as a museum on Toyotomi Hideyoshi with a the small theme park “Castle Land”. Its construction was certainly done with great care for the architecture of Japanese feudal castle and its tea ceremony room was said to be spectacular. Fushimi Castle was very popular for nearly 40 years but by 2003 its popularity had dropped so low that the park had to close down and the castle’s doors have remained shut ever since. In 2007, the grounds reopened to the public with several sports fields surrounding it.

Today Fushimi Castle is an amazing off-the-beaten-path spot during the autumn season or spring as it allows you to get a rare glimpse of their seasonal colors in a castle setting without having a few dozen or more people blocking your view. During my over-an-hour walk around it I only came across two other people who were both making use of the neighboring sports field. So whether you are an architecture or nature photographer or perhaps even a cosplayer, Fushimi Castle is a great place to take all the pictures you want without any disturbances.

From Kyoto Station it only takes a few minutes on the same train for Fushimi Inari Shrine so if you have some time to spare it is an easily accessible sightseeing spot.

When you pass through the gates at JR Momoyama Station there will be a map on your right-hand side from which you can navigate your way up the hill towards the castle.

As mentioned before, Fushimi Castle is open to the public for free so there is no need to worry about encountering any fees. Although the grounds are open throughout the year except for the year’s end holiday it is not entirely clear whether opening hours apply. Nonetheless it is highly recommended to visit during the day as the path towards the castle tends to get quite dark in the evening hours.

Rests to me to say that I hope you too give Fushimi Castle a chance to relive its glory days!
Open with Maps
Fushimi Castle (伏見城)
Free
〒612-8051 Kyoto Prefecture, Kyoto, Fushimi Ward, 桃山町大蔵45
Kyoto
Written by: Bjorn
Filed under: Things to Do
Tags:
Sharing