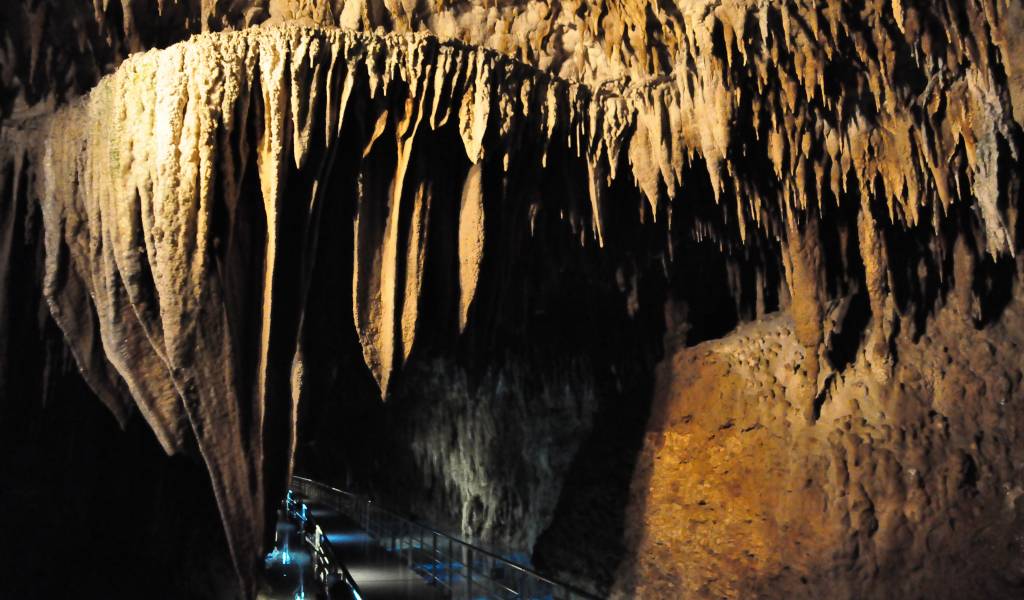 A Guide to Japan's Underground Worlds

Japan is a fascinating country to travel across by land, air, and sea, but have you ever considered going more “underground”? Stunning limestone caves that go back millions of years, weird flood systems that look like concrete temples and train stations under the sea are just some of the country’s most exciting, very off-the-beaten-track locations to explore.

In Yamaguchi Prefecture’s Mine City lives Akiyoshidō (also known as Akiyoshi Cave). The sprawling limestone cave—officially the biggest in Japan—is located underneath the Akiyoshidai Quasi-National Park. The park itself is well worth exploring with its unique limestone-smattered rolling plains; however, what you do see above-ground is just a small teaser of the mysteries that lay beneath the surface.

Over 300 million years in creation, the partially water-submerged landscape of the cave is entirely out of this world. It features long stretching stalactites, and rows of eroded limestone masses which can only be described as looking like if Jabba the Hutt gave birth to a terraced rice field. Safe for even the more claustrophobic of guests, this mammoth cave stretches out about 10km long and has up to 80m-high ceilings. The open tourist route takes up about 1km of the cavern, but it can get a little spooky down there, so the walk is probably long enough.

The title for Japan’s second-longest cave goes to Gyokusendo, a 5km-long cavern hidden underneath the touristy Okinawa World, a theme park dedicated to Okinawan culture. A baby compared to its Yamaguchi senpai, it’s estimated that Gyokusendo Cave has been around for about 300,000 years, but it wasn’t even discovered by humans until 1967.

It’s the main drawcard for most visitors planning a trip to Okinawa World, and rightly so. Inside the cave is an easily accessible, 890m-long steel walkway path that weaves in and around the cave’s most impressive features. The Blue Spring or Blue Grotto, formed from small rivers inside the cave is worth keeping an eye out for, as its illuminated blue water is equal parts beautiful and creepy.

Moving beyond caves now, Saitama is home to one of the most impressive underground worlds in well, the world, The Metropolitan Area Outer Underground Discharge Channel. Its official name is a bit of a mouthful, which is why its also sometimes referred to as the “Underground Parthenon” or the “Underground Temple.”

The space is a floodwater diversion facility which took about 14 years to complete. Since 2006 it’s been in action helping ease any overflow of wider Tokyo’s major waterways during the notoriously unpredictable rainy typhoon seasons. Sitting 22m below ground, the largest tank in here measures a whopping 177m long, 78m wide and features 59 2m wide, 18m high pillars—which make this labyrinthian network of towering concrete look more like the lair of an evil genius, or a dystopian neo-futuristic world. It is open to the public for tours, but if you plan to visit, be sure to check the weather forecast beforehand.

Japan is a nation that runs on railways, so it’s a given that one of the country’s most impressive underground worlds is going to be a train tunnel. The Seikan Tunnel connects the mainland of Honshu to the country’s biggest northern island, Hokkaido. Running 240m below the ocean’s surface, this 53.85km-long journey (23.3km of that undersea) is used by 50 freight trains and 30 shinkansen daily.

It’s hard not to get bogged down on the statistics when talking about this passageway because they’re pretty mind-boggling. This incredible feat of engineering took 24 years to build and cost around JPY 690 billion (USD 6.47 billion); and during its construction, 34 workers lost their lives. It was a massive investment for the country, but an important one given that it’s essentially weatherproof, a key quality for surviving Hokkaido’s hostile winter months.

Another fun fact, the tunnel is also home to the world’s first two under-the-sea railway stations: Tappi Kaitei on Honshu Island and Yoshioka Kaitei on Hokkaido. If you are making the journey up north, this is definitely the route you have to take.

You can visit the Seikan Tunnel Museum in Aomori Prefecture. There are special tickets for ¥1,300 that includes museum admission and a 45-minute Seikan tunnel train ride (only from April 25 to November 10), which goes through the seabed of Tsugaru Straits.

Buzzing beneath many of the nation’s biggest department stores, depachika are vibrant, sleek underground food markets quite unlike anywhere else in the world. The name comes from depato (Japan’s abbreviation for a department store) and chika (which means basement). They’re a seemingly endless network of foodie delights, and feature everything under the culinary sun.

Traditional Japanese sweets, immaculately displayed Western cuisine, convenient bento boxes, and fruit that costs as much as almost as your entire week’s salary. These are just a small example of the offerings you’ll find on display at virtually any given depachika. If you one have time to visit one, make it Shinjuku Isetan, this maze-like outlet is not only central but has an unbeatable alcohol selection and is generally considered one of the best food stores in the city. Read more about depachika.

Tokyo’s Sewerage Museum is just what its name suggests, a museum dedicated to the art of sewerage maintenance. A lot less stomach-churning than you may first anticipate, the museum features many exhibits and more interactive role-play experiences.

Visitors so inclined can pretend to be Tokyo sewerage workers; this rather unique experience also includes a visit an actual underground sewerage canal. If you do plan to go, it’s probably best to visit after your time at the depachika.