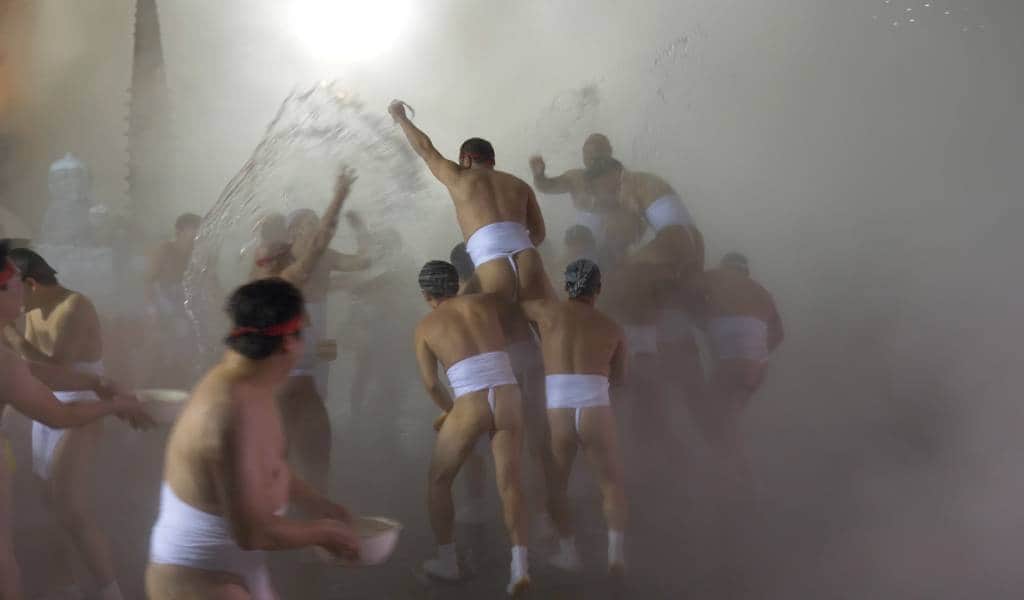 Japan has many ancient festivals. Without context, some can seem extremely wacky. Taking place on the northern island of Hokkaido in the bitterly cold depth of winter, the Noboribetsu Onsen “Naked Man” Festival may be one of the strangest. If you’re looking to cool down, then this festival is for you!

John Daub is the creator and producer of Only in Japan. He’s been introducing interesting facets of Japan on YouTube for 7 years and he recently launched a new channel.

The Noboribetsu Onsen (hot spring) Festival takes place annually on February 3rd and 4th. I have to be honest with you here, when I saw the images and videos about this event, it looked absolutely ridiculous! That’s precisely why I had to fly to Sapporo and travel to this onsen town to get a closer look.

Noboribetsu is one of Japan’s top onsen resort towns, located on the edge of a caldera—a volcanic crater lake—where you can see bubbling hot water that flows into rivers towards the town. Lake Kuttara in the volcano’s crater has what many experts consider to be the clearest water in Japan. I’ve been told that you can see 24 meters down to the bottom in the middle of the lake.

Are you getting the picture yet? Noboribetsu’s volcanic water is very important to the town’s economy, and the main reason that this unusual festival takes place.

The town is built on the west side of the volcano and smells of sulfur gas, a lingering rotten-egg smell that you do get used to after a few minutes. If you enjoy your holiday here, the smell will register with you as one of relaxation. If you don’t, well, omelets may never be the same for you again.

You’ll also quickly discover oni, a Japanese troll. They’re all around the town as a symbol of the hell-like valley appropriately named Hell Valley (or Jigokudani in Japanese), which is one of the attractions. It’s a large wasteland with discolored earth, no plant life. The ground is soft and dangerous, so stick to the wooden walkwalk that goes to the center.

Okay, let’s get on with it, shall we? What you came here to read about: the festival, the main event! A bunch of nearly naked guys running around chucking hot water on each other on the coldest night of winter.

On February 4th, I went to a small house 500 meters from Sengen Park to change out of my street clothes. All participants must change into a fundoshi, a Japanese loin cloth thong. I’ve learned that there are many different kinds of fundoshi over my time living in Japan, and the one at this festival covered much of my abdomen to keep me warm. That’s in contrast to the Naked Man Festival in Miyazaki that was little more than a cloth bikini for me.

In the rear, the cloth cuts in deep. Elders say it’s that way to keep it tight and from falling off. Once you put it on, you can’t take it off until after the event so make one more trip to the restroom before starting. Taking it off means putting it back on again and trust me when I say you don’t want to do that. Waiting for the event was actually kind of fun! There are always a few people who bring bottles of sake to drink.

Every year about 100 men participate in a “cavalry battle”. One man sits atop the shoulders of two others and they run around the park trying to grab the other rider’s team headband. There is a red team and a white team. The teams, in a way, are battling for the future of the town! According to the local tourism office, if the red team wins, the temperature of the hot spring rises that year. A good thing. If the white team wins, the amount of hot springs increases. Another good thing. Basically, the fight for good over evil is a win-win for the town, unless you like chilly hot spring waters.

On this day, the temperature had dived to -9°C (16°F), and it was cold enough to make your skin hurt. Thankfully, there was little wind or snow falling, but it was much colder than in years past. The way to stay warm and survive is to huddle together and shout “WASSHOI! WASSHOI!”—which is what festivalgoers shout to join the many group members into one. Shout it in unity and the group shall survive with one big heart. Stick together and you’ll be okay. That’s what the old-timers told me.

Staying active is also a surefire way to keep warm. Keep moving, keep throwing water! The other way is to pour some of the hot water on your shoulders every minute or so. The things with that is that when you get wet, the chill returns fast.

What’s the purpose of throwing the water? Well, it’s a way to show appreciattion for the gift the town has received. The water when thrown is what keeps you warm or blinds the enemy team. I’m not sure which was the purpose, but I threw the water with both intentions. The hot water creates a thick mist of steam all around the park adding a layer of mystery to everything. After about 10 minutes, the red team captured the white teams headband and we secured another year of hotter waters.

A few seconds later, a giant portable wooden phallus shrine cut through the mist carried by several men. With the taiko drums beating fast, we all went back to get more buckets of hot water. So, what’s the deal with the giant male wooden torpedo? It’s for fertility and an important Shinto artifact. It’s here to ensure the town’s population continues to grow. The water brings the town a lot of success, so why not with this too? With Japan’s shrinking population, it’s quite relevent, and the area needs all the help it can get!

When the drum beats came to an end and the men lowered the portable phallus shrine, the festival came to a close. The water throwing stopped. The mist evaporated quickly and we could see the spectators again.

There were some announcmements, some cheering, and the red team were announced as victors, but no one stayed to claim the prize. A hundred men turned the other way and dashed back 500 meters to the dressing room. That run, soaking wet in subzero temperatures, may have been the coldest I’ve ever been in my life. My hair was partially frozen!

Participants get to soak in a hot bath in the back of the dressing room to thraw out and warm up their core again. It wasn’t until then that I fully realized I’d survived my third naked man festival in Japan. The guys in the bath had all shared the same experience and there was a general air of achievement and happiness.

It’s good to keep your fundoshi loin cloth after the event. Many men give them to their wives, who use them to support their stomach when they are pregnant. That’s the history behind it, but you can also wash it and bring your cloth armour back the next year too! Most participants had been in the festival more than once, the oldest guy claiming 30 of them under his belt.

Although Noboribetsu is a town tourists visit to relax, to stroll through Hell Valley, or to hit the many hiking trails around the volcano, it doesn’t take long to recognize the deep appreciation the locals have for the hot spring waters and the nature around them that keeps their livelihoods intact. That deep appreciation is never forgotten and is a reason why the Noboribetsu Onsen Festival exists.

If you do want a quick side trip from the Sapporo Snow Festival and want to witness one of Japan’s most unique if not outright bizarre festivals, make the trip to Noboribetsu for a couple of nights! After watching this, you’ll never be the same again!

There are buses every 30 minutes or so that typically meet incoming trains. The fare is ¥340 and it takes about 15 minutes with a few stops on the way. A few buses are direct so ask before you get on. The price is the same.

Trains and buses leave often to Noboribetsu Station, but you will need to travel from the airport to Minami-Chitose Station and catch the trains from there. It’s about 63 km and express trains take about 40 minutes with tickets costing ¥3,000. Local trains take about 90 minutes and cost ¥1,700. JR passes cover this route.

Take a Limited Express Hokuto train (75 minutes, ¥4,480) or Donan Bus (90 minutes, ¥1,750), which both leave several times a day. During peak seasons, make sure you book bus tickets in advance, especially during the Sapporo Snow Festival.

Written by: John Daub
Filed under: Things to Do
Tags:
Sharing