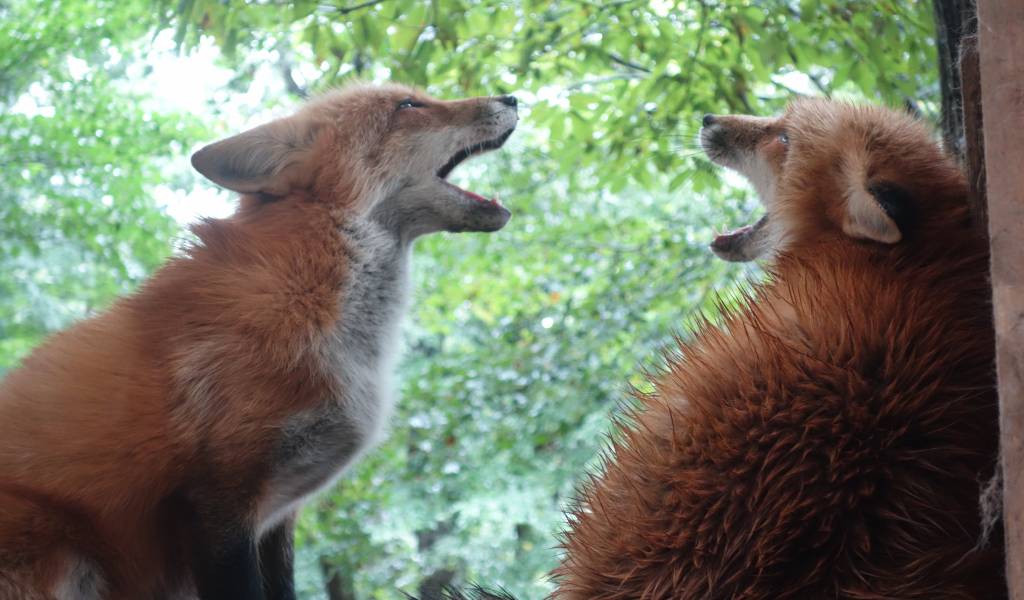 There are plenty of animal cafes and even animal islands (see our article on alternatives to mainstream animal cafes), but for cuteness, not many come close to Zao Fox Village in Japan. High up in the mountains of Miyagi, this is fox lover’s heaven.

Usually not seen up close anymore, foxes once lived side by side with humans in ancient Japan and have long been part of traditional folklore. Their magical counterparts are known as kitsune, and possess unusual abilities as well as intelligence. They are the messengers of the Shinto Inari spirits and are often seen at shrines in statue form. There’s even a fox parade every New Year’s Eve at Tokyo’s Oji Inari-jinja Shrine. The real life versions are basically just adorable. Fluffy, inquisitive and painfully photogenic, these creatures are really special seen so close, and not many places make that possible.

Nestled in snow-covered mountains for most of the year, the village is a tad difficult to reach and requires planning, so detailed information can be found at the bottom of this post (along with a small section on the ethics if you’re concerned). As you pull up into the car park, excited for foxes, you might be somewhat confused by the giant gorilla statue that guards the entrance, but this is merely a reminder of the amusement park which once occupied the land, and not a sign of what’s held within.

Once you’re past the statue’s intimidating stare, you are greeted by the sign-covered entrance, and only meters away from the promised land. General admission is ¥1,000, but free for elementary school students and young children. You can buy small bags of treats for ¥100 here or at the feeding area. (But only feed them there; elsewhere you will be out-foxed and overpowered by the wily vulpines).

Instructions will be explained in Japanese and copies are available in English. It’s largely common sense: Remember they are wild animals, so don’t pet them, don’t have anything dangling, don’t smuggle one home. The basics, but do read them.

Up close and personal

Depending on the seasons, different opportunities are available to hold fox cubs or foxes. There is a small charge; for larger foxes in autumn it was ¥400 for a couple of minutes and the chance to sport a horrendous lime green jacket. This is quite good for getting it out of your system, as the personal strength required not to touch the sleeping ones is immense. This is in the central courtyard which is the first area you enter, with enclosures of foxes which are being cared for specifically, or being vaccinated, etc. You can then choose to wander the forest and see them running around, squabbling and curled up sleeping.

The sleepers and screamers

Most of the great photos you’ll have seen involve a lot of curled up adorable bundles of fur, and these are usually on the big walk-way shelves that line the two main paths from the courtyard. With a million opportunities and many wanderers passing by, this is a great place for close ups and selfies (and if you happen to have a fox filter, even better). Just restrain yourself from touching them, regardless of the cuteness, they have very sharp teeth, and are not tame.

One thing you might notice as you stroll around are the blood curdling screams of the foxes. These are not vicious murders taking place behind the trees, but normal squabbles in everyday fox life. The foxes annoy each other and are pretty vocal about it, so don’t go near them when they are fighting, but do take notes on how to react to annoying people in the future (it’s very effective).

The feeding station is located on raised stilts in the middle of the forest, with a large covered area and lots of keen foxes. When you get in, look down as you will no doubt see some adorable eyes staring back up at you. Foxes are adorable and line up for snacks, with quite a few staking out the base for new offerings. Bags of food are ¥100 and can be bought here or at the entrance.

Seek out the shrine

There is a small fox shrine up in the winding paths of the forest, and you don’t have to wait long for a fox to wander past, we even saw one asleep inside. The awake ones are slightly less photogenic though.

If you’ve decided you have to leave before you just steal one (please don’t), then you can exit via the gift shop which, of course, has a ridiculous amount of fox-themed things. There are some good novelty gifts like fox dropping chocolates, and it’s a good way to pass the time while you await your taxi or lift home.

About an hour or two is enough time here, especially in the colder months, but if you’re very keen on photography you may want to spend more time to get the perfect shots with a cafe break. We visited in mid-September and it was chilly so a jacket was needed, but it can be very, very cold in winter. Despite the rain, the foxes were pretty active and lots were asleep in the dry areas, so don’t worry if it isn’t a perfect sunny day. The snow makes for incredible shots too, so the cold months have their perks, while spring offers cubs!

Places like this are profiting from animals—there is no denying that. The Zao Fox Village claims to be a sanctuary, and all foxes have been raised in house, and would now not survive in the wild. They do go through the same natural processes as they would in the wild though, for example the cub separation process (detailed on the official website). The area is a large park/forest with foxes running free, and in-built mini shelters and huts for them to take cover in. On my visit and those of friends, the foxes were looking healthy, active and well cared for while still bearing the signs of occasional squabbles and forest life.

Their fur does malt in the summer and they can look a little patchy, but this is normal.
The area is quite large, but little information is available about their care aside from a specific page about the prevention and treatment of illness on the website. Why the foxes are docile enough to be held is not fully explained. If you are uncomfortable about any form of animal enclosure, this may not be for you, as they are not free, but the standards were significantly better than many zoos we have visited here.

Getting to Zao Fox Village from Tokyo

The village is up in the mountains, and it is a bit of a trek. From Tokyo, you have two main options, and you can choose what suits you best based on prioritizing money or time.

You can travel from Tokyo Station direct to Shiroishizao Station by bullet train, which takes 109 minutes on the Yamabiko 145. These leave about once an hour but check your route beforehand. This is a pricey option though costing about ¥10,000 each way. If you have the JR Rail Pass, then you’re set, as this will cover the shinkansen costs.

Alternatively, you can catch a bus to Sendai and catch a regular train to Shiroishi Station. Buses cost between ¥3,000 and ¥5,000 and take about 6 hours, so an early morning start can get you there for lunch time. See Kosoku for Tokyo to Sendai bus tickets. This is a lot of time, but helps cut down the cost significantly and a night bus back to Tokyo means you don’t lose too much useful time. The train portion costs about ¥770 and takes roughly 50 minutes.

You can drive, it takes about 5 hours from Tokyo and you need either a Japanese license or the international driver license to rent a car (or a really nice friend who drives!).

Local transport to the village

Once you’ve reached the nearby stations from Tokyo or elsewhere, you have to get to the actual village, there are two cheap options, but they are limited, and taxis are the most common way.

So, basically if you have a JR pass, or money, then shinkansen it and it’s an easy day trip. If you would rather save, get the highway bus and have a nap. Try and fit in the bus and shuttle if you can, but come prepared to pay for a taxi just in case.

This post was originally published in September 2016. Last updated: January 2021.