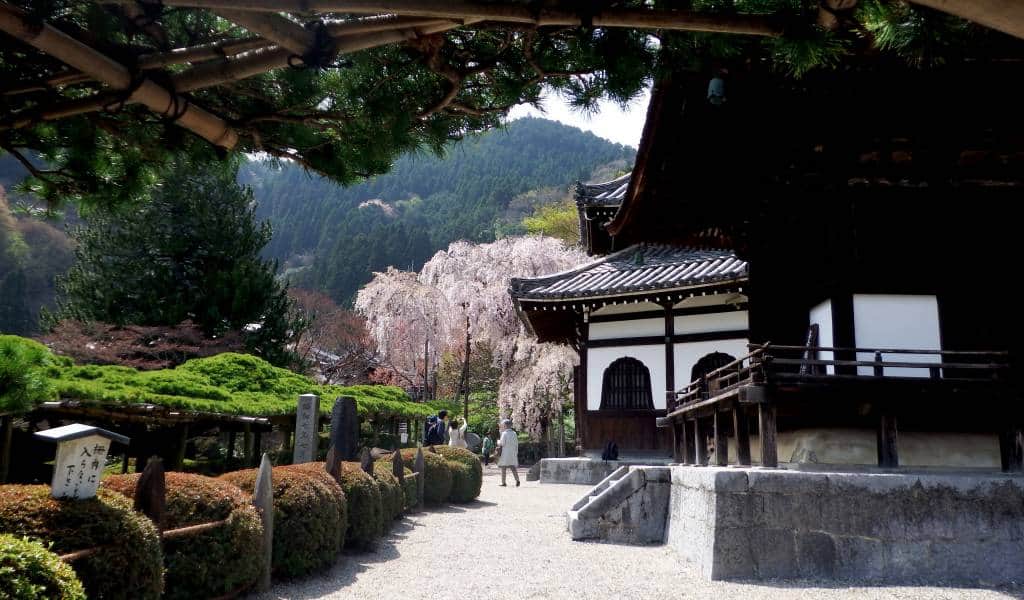 Yoshiminedera Temple is sometimes referred to as one of Kyoto’s ‘hidden gems’. Tucked away in the restful mountains of Kyoto’s lower west side, it tends to be left off the popular tourist maps. However, there is a bus that gets you directly there. The unique scenery of this temple includes a 34-meter horizontal pine tree and sweeping views over the city. The cherry blossoms of Yoshiminedera are also a magical escape to a quiet and more contemplative side of Kyoto.

Nishikyo is Kyoto city’s most western suburb. The name literally means ‘western capital’. Most of its boundaries hug the mountainside, but Nishikyo also includes Arashiyama south of the Katsura River from the Togetsukyo Bridge.

One of its more well-known locations is Saiho-ji, which is a Zen temple popular for its amazing moss gardens. To visit here, you have to make a reservation well in advance.

Another exclusive spot is the Katsura Imperial Villa to the east. It’s home to one of the most acclaimed Japanese gardens, and tours here are also by reservation only. Yoshiminedera, however, is in the lower reaches of Nishikyo, and its gate happily welcomes all random visitors who casually drop by.

Get there in just 45 minutes from Kyoto Kawaramachi

Getting to Yoshiminedera Temple is quite straightforward. You can take either the JR train to Mukomachi Station or the Hankyu Line to Higashimuko Station (west exit). Both of these are local stations, so express trains don’t stop here.

If alighting at JR Mukomachi Station, the bus you have to catch is the Hankyu Bus 66 bound for Yoshiminedera (阪急バス66番 (善峯寺行き). There’s only one bus per hour, with no buses from January 6 to the end of February. From JR Mukomachi Station, the bus leaves once an hour at 35 minutes past the hour, and from Hankyu Higashimuko at 42 minutes past the hour starting from 8:35 am with the last bus at 2:35 pm. The journey from Mukomachi to Yoshiminedera takes 30 minutes.

At the peak of Kyoto cherry blossom season, or in Autumn, the return bus can get crowded and there is only one bus an hour at 24 minutes past the hour. Regardless of the day, the last return bus is at 3:24 pm, so plan accordingly or be prepared to pay for a taxi. The walk down is about 1 hour 15 minutes.

Be bedazzled by Yoshiminedera’s cherry blossoms

Yoshiminedera has over 100 cherry blossom trees, so there are plenty to go around, especially away from the Kyoto crowds. The beauty of the weeping Higan cherry blossoms do more than flutter your heart, they’ll set your camera lens on fire.

For the 2022 cherry blossom season, the Kyoto blooms are forecast to start March 29th, with full bloom expected around April 6th. Cooler mountain locations like Yoshiminedera may follow a couple of days or so later.

If you truly enjoy contemplating nature, you’ll notice quite a wide variety of trees. These include early and late bloomers among which are the whiter Shogetsu and Kikuzakura varieties.

Yoshiminedera doesn’t just have a mountain side location overlooking Kyoto, it also has its own little valley of cherry blossoms. You can stroll among the blooms or take in the pink pageant from various angles. The prime viewpoint is a towering wooden shrine dedicated to Koufuku Jizo (幸福地蔵) or the Happiness Buddha of the afterlife. This Buddha is the only one to wear sandals (of straw) as he will gladly walk the extra mile for you.

Other locations such as the lotus lake pond have just a single cherry blossom tree with a slight hilltop view over Kyoto. You’ll even find a small foxy Shinto shrine with a connection to the Fushimi Inari Shrine.

Yoshiminedera is not just about cherry blossoms and mountain views of Kyoto. In late spring and into early summer there is an abundance of hydrangeas. In fall, the temple ground and surrounds are swathed in maple and other autumn foliage.

Just up from the Main Temple, or Hon-do, you will come to an amazing national treasure. It’s a peculiar horizontally trained pine tree and one of the most popular of such trees in Japan. This tree also gives Yoshiminedera its nickname of ‘Pine Tree Temple’.

In 1857, a government minister named it Yuryu (臥龍) meaning roughly ‘Reclining Dragon’. However, in 1994 pine worms got the better of the dragon and its tail got snipped by 15 meters—so now it is only 37 meters long and not 52. Regardless, this snoozing dragon has over 600 years of tales to tell!

It’s a truly fascinating sight and there are a couple of stone staircases passing under it. It also slumbers by one of the most beautiful weeping cherry blossom trees of western Kyoto. This specimen is over 300 years old and is actually grafted to a maple tree.

It’s known as the ‘Keshoin Willow’ because it was planted by the bare hands of the mother of the 5th Shogun, Tokugawa Tsunayoshi. He enacted Japan’s first animal protection laws, especially regarding dogs. He’s thus known as the ‘Dog Shogun’ and his own trusty pal was called Takemaru. His mother’s mausoleum, Keshoin, is also located within the Yoshiminedera grounds.

Alleviate back pain at the Medicine Buddha

Yoshiminedera is actually a temple dedicated to Kannon or the Buddha of Mercy and Compassion. In other parts of Asia, this deity is known as mother Guan Yin in China, Avaloktesvara in the Indian canon, or Quan Am in Vietnam.
The central figure in the Main Hall, as you ascend the steps, is a Thousand Armed Avalokiteshvara, or Senju Kannon in Japanese. She embodies the compassion of all the Buddhas combined. Yoshiminedera is the center point of three sacred pilgrimage trails. So, you may see numerous pilgrims having their scrolls and booklets adorned with traditional shodo or calligraphy.

If, however, you are feeling a pinch on the nerve, Yoshiminedera is also famous for its Medicine Buddha or Yakushi Nyorai. It’s amulets are said to heal lower back pain and neuralgia. To make your plaintive pleas heard, you can chant the prayer, ‘on koro koro sendari matougi sowaka’. The Yakushi Hall is on the upper far ridge of the grounds overlooking the Toyama valley.

During the Great Hanshin Earthquake of 1995, a bus driver on the job had a miraculous escape from death and injury along an elevated highway. He attributed his good fortune, and that of his passengers, to an amulet he had bought at the temple. Since then, its traffic safety amulets have also become popular.

Get a little more out of your day and go local

Another fun and interesting place to visit in the Muko area is the Kyoto Bamboo Park or Chikurin Park. If you walk down the mountain following Google Maps it’s about a 6km-hike, or west from Higashimuko Station it’s only about 30 minutes on foot.

It’s free to enter, and you can see various types of bamboo growing, walk through groves, and visit the shop. Educational information is in Japanese, but the museum has some English.