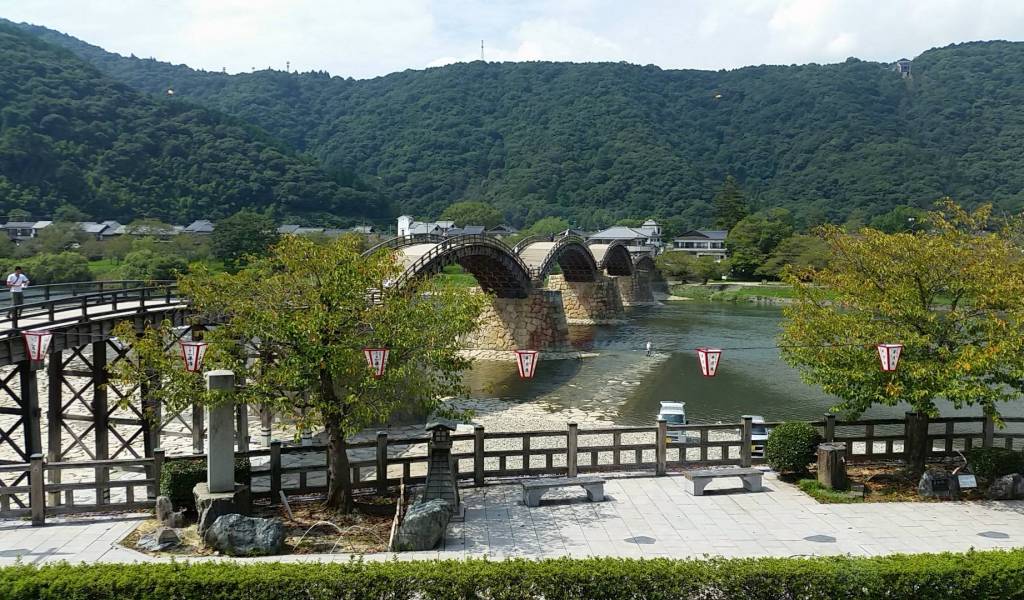 Things to Do in Iwakuni: City of Castles, Snakes and Sushi

Iwakuni is a small city in the eastern part of Yamaguchi Prefecture, with stunning scenery where you can step back into old Japan without the selfie sticks and crowds of Kyoto. Whether you’re stationed there or just looking to visit, here’s our pick of the top things to do in Iwakuni.

A traditional castle town facing the Seto Inland Sea, Iwakuni’s peaceful surroundings make for a wonderful, relaxed day out. Especially beautiful during cherry blossom season or for momiji in autumn, the scenic views suit every season. With famous white snakes, a sword museum and local specialty sushi though, there are plenty of other things to enjoy as well. Whether you’re based at the US Marine Corps Air Station, or just looking for a cool spot to visit, the city is a great introduction to Yamaguchi and Japan as a whole, with plenty of things to do—plus it offers easy daytrips.

Things to do in Iwakuni: See Kintaikyo

Deceivingly steep wooden arches make this bridge one of the most famous spots in Yamaguchi, and rightly so. Built at the base of Mount Yokoyama in 1673, Kintaikyo spans the Nishiki River and was designed by feudal lords to resist strong flood waters which had destroyed its predecessors. The steep wooden arches are supported by stone piers, and parts are replaced periodically for maintenance (you can buy small souvenirs made from the wood too).

During the most recent changes, the bottom step of the central arch cost the city 3 million yen—so it’s a pricey job. It is one of Japan’s three great bridges and is the symbol of the city. During spring, cherry blossoms line the river, which is beach-like with shallow waters perfect for paddling and fishing. The bridge is host to its own festival in late April, as well as being a great spot for viewing the nearby castle—especially stunning in autumn when surrounded by the changing maple trees.

Combined tickets for the bridge, ropeway and castle can be bought at the bridge entrance for ¥940, the bridge is ¥300 otherwise.

From June-September you can see the traditional art of cormorant fishing take place on the river. Lanterns adorn fishing boats with a tamed cormorant at the head who scoops up fish, which are quickly removed before they can be swallowed. Fishermen wear traditional outfits, including straw skirts and the headgear of the traditional noblemen, to perform the 300-year-old fishing technique.

The festival in April includes a parade across the bridge called “sankin-koutai”, which is a feudal lord procession led by locals in full samurai costume.

Just across the bridge, this park contains samurai homes, museums and some interesting snacks. Filled with food stalls for the April event and hanami picnics in spring, the park is a great gathering place which is fun to explore. Home to cormorants, street cats and very tame pigeons—the animals love it too.

Once in Kikko Park you are faced with a very important choice: what ice cream flavor do you want? You may jump to trusty chocolate or maybe venture to matcha—but how about trying ayu? The fishy tail may be a giveaway, but ayu are the small sweet fish which fill the river and attract the cormorants—and actually make really nice ice cream! When fresh from the water they smell like watermelon, and the tiddlers from the Nishiki River were awarded second most delicious across Japan (you can’t win them all).

If you’re not convinced, there are hundreds of flavors to choose from at the two competing stores in the park, and English menus are available. We opted for Japanese plum, ayu and matcha with adzuki bean paste, and all three were delicious (but some were more delicious than others).

Kikko Park is great for an ice cream stroll, and you can admire the fountains and greenery before visiting the former residence of feudal lord Kikkawa, whose family built the castle while ruling the area in the 17th century. The ditches and plaster-walled buildings with mud fences show how the houses of the samurai would have looked back in the day, and it’s a good area for exploring as there is also a shrine.

More things to do in Iwakuni: Snakes and swords

If you walk through Kikko Park, and past the Kikkawa house, you will find yourself in a small square which has some rather interesting options, including the castle cable car (more on that later). To your right, however, is the Imazu White Snakes Museum, home to the famous and protected albino snakes of Iwakuni (not great for orphidiophobics, sorry).

With white scales and red eyes, the snakes may look nightmarish to some, but are harmless and considered to be messengers of Benten, the goddess of wealth. They can be seen near the shrine, but for a more controlled experience, the museum has live-in snakes, videos and lots of information on the slitherers, as well as lucky snake-skin souvenirs.

Straight ahead of you is the Iwakuni Art Museum which houses an expansive collection of samurai artifacts and focuses on Japanese traditional culture and art. There are three main exhibitions: Life and Death Culture which is about the samurai, Cultures of Life and a special exhibition which showcases seasonal items and pieces of special interest. The museum pieces are incredible to see, with original prints of the bridge as well as well-preserved samurai armor and swords.

We were lucky enough to be shown around by the owner, who detailed the history and importance of the pieces, but don’t worry, even without this, it’s fascinating to see the original items in their hometown. Pieces have been lent to the New York Metropolitan Museum among others, and include Japanese National Treasures. A personal favorite were the helmets adorned with different animals, each reflecting a distinct quality in the wearer, for example rabbits for speed and a clam, which if gifted meant the people would never be parted.

The castle is perched high up on Mount Shiroyama and visible from Kintaikyo Bridge, but easy to reach via a three-minute ropeway (cable car) ride. This is also a great opportunity to see the bridge in all its glory, with spectacular views of the city behind it.

Built in 1608 at the beginning of the Edo period, the castle was positioned carefully with great defenses, including a natural moat, and has four glorious stories which poke out from the trees. Having taken five years to build, it was destroyed only seven years later—and the present reconstruction only dates back to 1962.

You can venture inside to see swords, armor and other items or just enjoy the views.

Lunch plans: Iwakuni sushi is a must

Iwakuni offers lovely, leisurely days out—with plenty to do and all quite close by. You can snack on ice cream and skip eating out, but we do have a lunch recommendation.

Iwakuni sushi is unusual in that it is made in much larger quantities that regular sushi, and is layered. You’ll see the pink-topped rice in keyring form, on posters and more, and it’s a great chance to try some unusual regional food. Right in front of Kintaikyo Bridge is Hirasei, a traditional teishoku restaurant (meaning it serves set meals).

They have an incredible view of the bridge and castle you can enjoy while you eat your sushi, as well as local specialties such as lotus root, which here has many more holes than elsewhere (the more you know).

Iwakuni is a fantastic city, and if it’s your base for exploring then you’ll be well connected to reach spots like Japan’s longest cave, Hiroshima and even the floating torii-gate of Miyajima.

An ideal daytrip, the island of Miyajima, or Itsukushima, has one of the most famous sights in all of Japan, as well as hikes, deer and delicious treats. As well as visiting Itsukushima Shrine and the iconic giant torii gate, you can hike to the top of Mount Misen for beautiful bay views and explore the nearby Daishoin Temple and Senjokaku Hall.

Access: Catch the City Liner headed to Hiroshima and jump off at Miyajimaguchi; the journey takes 20 minutes and costs ¥320. From there, hop on one of the ferries (¥180, 10 minutes) and you’ll be on the island before you know it!

An unusual day out for sure, this is Japan’s longest cave and it’s home to visual wonders like the “Jellyfish climbing a waterfall” and “The Dragon’s Secret Passage”. Deep beneath the Akiyoshidai Quasi-National Park, dotted with limestone formations both above and below, the cave has a 1km walking path with elevator access. The park has extra caves to see, including the hiding place of a Heike warlord and a cattle-smuggling spot with its very own “entrance to hell”.

Access: Take the Sanyo Line to Shin-Yamaguchi (two hours, ¥1,660) and from there catch a bus to the park and caves. If you have a JR Pass, you can cut it to an hour and a half by heading to Hiroshima and traveling on the Shinkansen from there.

A great city with plenty of history and even more delicious food, Shimonoseki is a famous port town and the closest point to Kyushu. Spend your day eating your way through the freshest produce of Karato Market and enjoying the living version at the impressive Kaikyokan Aquarium. The city is the sight of famous battles between soldiers and samurai alike, with Akama Jingu highlighting the tragic tale of the young emperor Antoku.

Access: Travel is direct on the Sanyo Line, taking three hours and costing ¥3,000 each way.

The biggest city in the area, Hiroshima is a short train journey from Iwakuni and a fantastic place to explore. Known for its terrible history, Hiroshima has a strong, important link to its past, but also a bustling food scene and stunning sightseeing spots to explore. After visiting the deeply moving museums and historical sights, the memorial park takes you towards the castle and its city-wide views, and the beautiful Shukkei-en Garden. Feast on Hiroshima okonomiyaki and enjoy the local drinking scene before heading home knowing Japan—and the world—a little bit better than before.

Access: Simply catch the City Liner, it takes 45 minutes and costs ¥760 one way.

Iwakuni has an airport, bullet train access and is close to Hiroshima. It even has old school buses to balance it out, so you’ll have no trouble getting in and around, whichever way you come.

Tokyo: If you’re traveling from Tokyo, you can fly to Iwakuni Kintaikyo Airport from Haneda (1.5 hour flight) and catch a 10-minute bus to Iwakuni Station. From there, you can catch an old-style bus at Bus Stop #2 to Kintaikyo and enjoy the narrow traditional streets on the way. You can also fly into Hiroshima.

If you travel by bullet train, it is 4.5 hours from Tokyo, via Hiroshima, to Shin-Iwakuni Station on the JR Tokaido-Sanyo Shinkansen Line.

Hiroshima: If you have a JR Pass you need to make the most of, Shin-Iwakuni is only 15 minutes from Hiroshima on the bullet train, and if not, Iwakuni Station is under an hour away on regular trains.

Osaka: It takes two hours and 10 minutes by bullet train to Shin Iwakuni Station (via Hiroshima).

Information in this post is subject to change. This article was first published in October, 2016. Last updated in August, 2018.