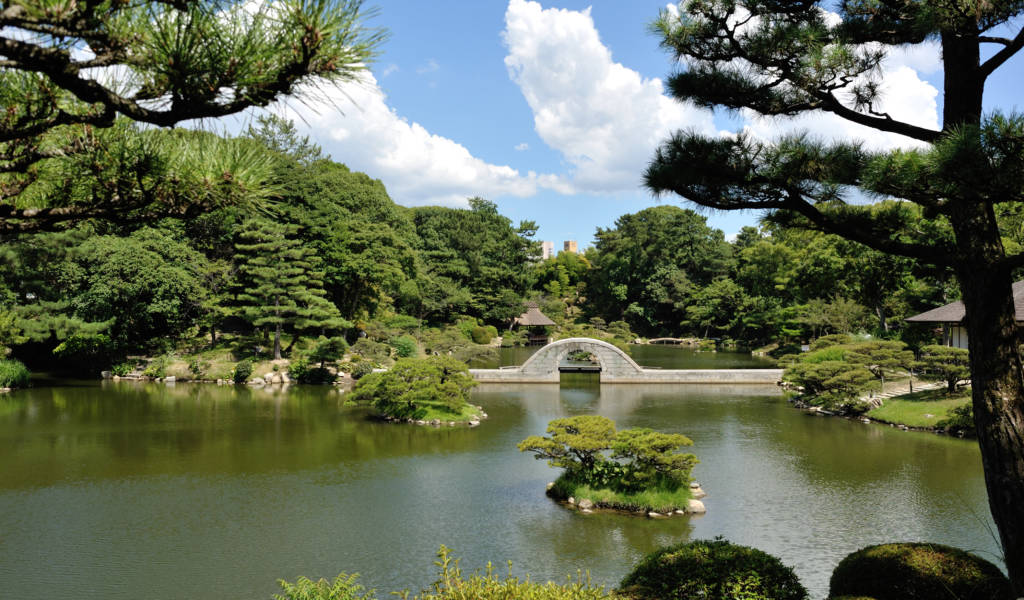 There is a garden in Hiroshima that is bigger on the inside than the outside. Leave the city’s main train station and head north over Enko Bridge to Kaminoboricho neighborhood. After that follow the signposts: as with all of the city’s major attractions, the route to Shukkei-en garden is liberally signposted.

At the gate, two options await. If you have time, go for the combined Shukkei-en Garden/Hiroshima Prefectural Art Museum pass. If not, ¥600 gets you into the garden, possibly picking up a packet of koi nibbles along the way, and into a small, perfect world.

Shukkei-en means “shrunken scenery garden”. When construction and re-design began in 1620, the Daimyo Asano Nagakira didn’t have much space to work with, but it was de rigueur for daimyo to have a formal garden. So he appointed his chief retainer, Ueda Soko, to design one that would be, in effect, a large garden with a small footprint.

Ueda, a tea-master, added a few tea pavilions for good measure, including the frankly delightful sukiyazakuri-style Seifukan teahouse. After the bombing of Hiroshima in 1945, the garden, though badly damaged, become a refuge for survivors. After the war, the garden was renovated and re-opened to the public in 1951.

Inside Shukkei-en’s precincts you will find mountains, valleys, lakes and islands. The lake, Takuei Pond, had ten islets and the Koko-kyo Bridge, which the brave may walk over while the rest of us feed the koi. Local history has it that the garden is a replica of a view of Lake Xihu in Hungzhao, China, but there’s some doubt about whether that lake looks anything like this one. What Shukkei-en definitely is, however, is a Muromachi-period–style garden with a classic “circular tour” design, leading visitors around the site in specific patterns intended to make sure they take in all the vistas.

The garden offers monthly tea ceremonies keyed to the season, and is a popular viewing spot for cherry blossoms, plum blossoms and the fierce red of autumn maples. You can rent a yukata if you’re feeling historical, and if formal tea ceremonies aren’t your thing, there’s an outdoor coffee and teashop, the Sensui-tei.

Tea is important in the Shukkei-en, as you might expect from a garden designed by a tea-master so dedicated that he had a pine planted on one of the peaks surrounding the city just to improve the vista from teahouses in the garden.

These days there’s no view of the mountains, thanks to surrounding skyscrapers, but inside the snug Shukkei-en you can still forget exactly which century you’re in. 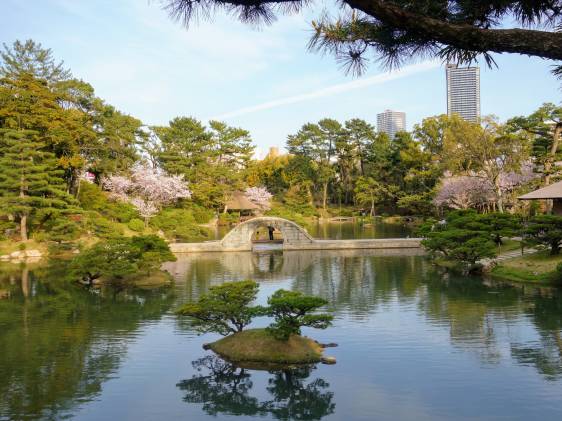 There may be some doubt about which century you are in if you do the smart thing and buy the combined pass for the Shukkei-en and the neighboring Hiroshima Prefectural Art Museum. The Museum’s 3,500-piece collection concentrates on traditional Asian art, Meiji-era Nihonga, and global art from the 1920s and 1930s. There are also lots of works by artists connected to the Hiroshima region.

The museum is a warm (or cool) spot to while away a few hours even if art isn’t your jam, but if it is—oh, if it is—put this gem on your itinerary right now. The HPAM features works from Japanese greats such as Isamu Noguchi, Kibo Kodama, Okuda Genso, and Okada Kenzo, as well as Western heavyweights Barbara Hepworth, Rene Magritte, Giorgio di Chirico and Henry Moore. The museum houses a mixture of media, including mobiles, sculptures and lithographs.

One of Salvador Dali’s famous works is a jewel of the collection, which was news to me when I ducked in there to get out of the November cold, sauntered upstairs, and turned a corner, only to be knocked onto my backside by The Dream of Venus. Other highlights are a pair of minutely detailed Edo-era screens depicting local landmarks Miyajima and the Itsukushima Shrine. Exactly what’s on display rotates, so there’s an element of discovery for repeat visitors.

One caveat is that the exhibitions themselves don’t have a lot of information in English, but pamphlets available at the entrance to each gallery do have English descriptions, and all the nameplates are multilingual.

For those of you resigning yourselves to your traveling companion’s enthusiasm, take heart: the HPAM has both a restaurant and a tea-room where you can hang out. Both are designed to give lovely views of the neighboring Shukkei-en. Also, there is a nifty gift shop on the ground floor.

The garden and the museum together is a relaxed way to fill an afternoon, which you may need after taking in the A-Bomb Park or Hiroshima Castle’s sprawling grounds.

2-22 Kaminobori-cho, Naka-ku, Hiroshima
9am - 5pm, closed Mondays and New Year. Fridays extend opening to 8pm between April and late September, and to 7pm between late September and March
Read more

Combined admission to Garden and HPAM: ¥600 for adults, ¥340 college students.