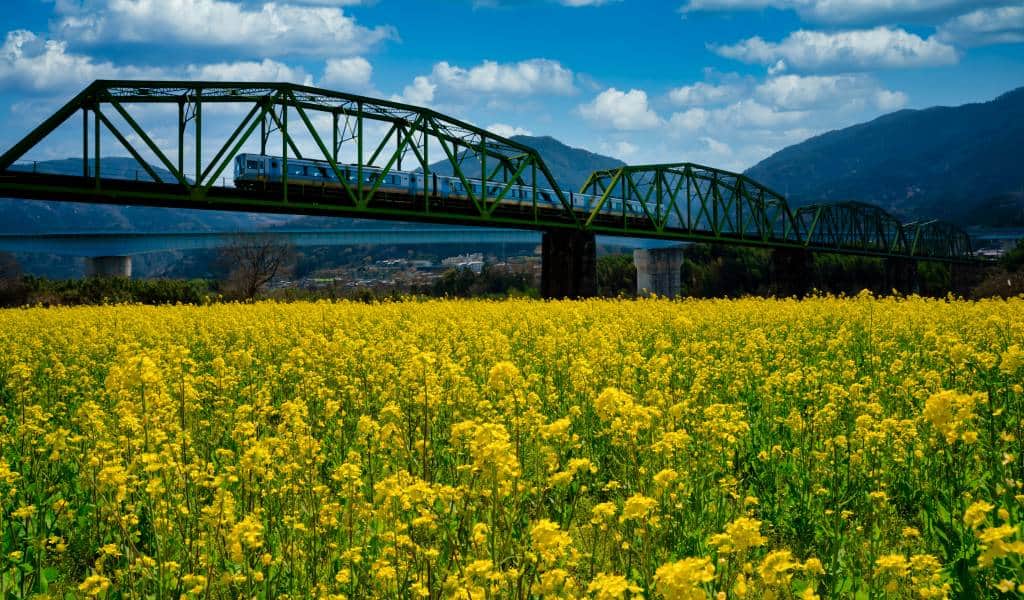 A Detailed Guide to the JR Shikoku Pass

Shikoku may be the smallest and least visited of Japan’s four main islands, but it still has it’s very own rail pass. The JR Shikoku Pass — officially called the All Shikoku Rail Pass — covers unlimited travel on pretty much all trains on Shikoku (JR and otherwise), plus travel to/from and around Shodōshima, a pretty island in the Seto Inland Sea.

Overview of the JR Shikoku Pass

If you’re looking to explore the highlights of Shikoku — which include Ritsurin Garden, the Iya Valley, and Dōgo Onsen — this might be the best rail pass for you. You have a choice of 3-, 4-, 5-, or 7-days of consecutive travel. JR Shikoku also has a regional rail pass, the Kagawa Mini Rail and Ferry Pass (more on that below).

JR Shikoku Pass at a glance:

*Passes for children aged 6–11 are half the price of adult passes; children 5 and under can ride for free.

What is covered by the JR Shikoku pass?

The JR Shikoku Pass covers unlimited travel on all JR Shikoku trains and several private lines (including tram networks in Kōchi and Matsuyama) on the island of Shikoku; the ferry between Takamatsu and Shodōshima; and buses on Shodōshima (but not other buses on Shikoku).

Note that the countrywide Japan Rail Pass does not cover any of the private rail lines in Shikoku (or the ferry) so you do get a little more with this Shikoku-specific pass. See the full list of eligible transport below. The pass also offers some discounts on other ferries and bus routes.

Everything covered by the JR Shikoku Pass:

What is NOT covered by the JR Shikoku Pass?

Bear in mind there are still restrictions with the JR Shikoku Pass. Passes are not eligible on the following:

Shikoku has a few sightseeing trains, which have pretty interiors, big windows, and dining car-style seating. You book for the whole journey, which lasts two or three hours and includes a bentō (boxed meal) with regional specialties.

All of these trains have “green car” (akin to business class) status, so you cannot just hop on with your JR Shikoku Pass. In order to ride any of these trains, you first of all need a seat reservation. You will also need to pay both the green car surcharge and for the meal, which winds up costing around ¥4,000 total per person. If you’re keen on riding any of these trains, inquire at the ticket reservation office where you pick up your pass.

Where can I go with the JR Shikoku Pass?

Trains can take you to all of Shikoku’s major cities: Takamatsu, Tokushima, Kōchi, and Matsuyama. Some rural areas (and Shikoku is largely rural), like Iya Valley, require additional bus transport not covered by the pass. If you really, really want to get out in the countryside, you’re probably better off renting a car (though driving in rural Shikoku has its own drawbacks).

For many travelers Takamatsu is the gateway to Shikoku. This port city, and the capital city of Japan’s smallest prefecture, Kagawa, is the closest to Honshū, Japan’s main island. It’s home to Ritsurin Garden, one of Japan’s largest landscape gardens, dating to the 17th century. Takamatsu is also the jumping off point for ferries to Shodōshima.

Shodōshima is one of the largest islands of the Seto Inland Sea. It’s famous in Japan for its cultivated olive groves (which is why you’ll see lots of olive-themed attractions). While the rail pass covers bus travel on Shodōshima, we think the best way to take in all those coastal vistas is on two wheels.

Tokushima (capital of the prefecture of the same name) is where the 88 Temple Pilgrimage begins — you can take the JR Kotoku line to Bandō to visit Temple #1, Ryōzenji. It’s also the setting for one of Shikoku’s biggest annual festivals, the Tokushima Awa Odori.

The Iya Valley is famous throughout Japan for its awesome vine bridges suspended over gorges. (They’re now reinforced with cables but that wasn’t always the case!). Ōboke is the rail hub for Iya, from where local buses (not covered by the pass) travel deeper into the valley for the vine bridges. Meanwhile, the JR limited express Shimanto train, which travels between Takamatsu and Kōchi (via Ōboke), has spectacular views of the Iya Valley.

Shikoku’s Anan Kaigan (Anan Coast), in between Tokushima and Kōchi, has surf beaches, sea turtle spawning sites, and pretty coastal scenary. The coast is served by the JR Mugi line and the private Asa Kaigan Railway (both covered by the pass).

Kōchi, on Shikoku’s southern coast (and capital of Kōchi prefecture), is a laid back city with an original castle, an excellent street market on Sundays, and beaches nearby.

Shikoku at its most remote: Cape Muroto, in Kōchi prefecture, juts out into the Pacific Ocean. It’s a UNESCO Global Geopark with dramatic stone formations. It’s also where Kūkai — a famous figure in Japanese Buddhism — is said to have found enlightenment.

Matsuyama, capital of Ehime prefecture, is home to one of Japan’s oldest hot springs, Dōgo Onsen — said to have inspired the bathhouse in Ghibli’s Spirited Away. (Note that Dōgo Onsen is currently undergoing rennovations works, but remains partly open).

Here’s a sample itinerary designed to max out the 3-day JR Shikoku Pass. It starts in Takamatsu, and assumes you’ve already visited Ritsurin Garden (if not, do that first thing in the morning on day one). Ideally, you’ll want to be in Kōchi on a Sunday morning for the famous street market.

To get the most out of the pass, travel back to Takamatsu (or Kojima, just over the strait on Honshu and as far as you can travel with the pass) at the end of the final day. The total cost for all the trains in this itinerary, starting and ending in Takamatsu, is ¥23,390! So that’s a signficant savings, even over the pricier 3-day JR Shikoku Pass for foreign residents.

Is the JR Shikoku Pass a good deal?

Like all of the rail passes from all the regional JR operators, the JR Shikoku pass works out to be a good deal if you plan to cover a lot of ground.

While Shikoku doesn’t have any Shinkansen, it does have some pricey limited express trains. We’ve worked out the value of one 3-day itinerary, and have compiled this handy fare chart for you to work out your own itineraries — and see if it equals savings (or not).

Note that there is no direct route between Kōchi and Matsuyama. You need to transit at Tadotsu, and the whole journey takes four hours plus transfer time. Alternatively, you can take a bus between the two; JR Shikoku Rail Pass holders can ride the Nangoku Express Bus between Kōchi and Matsuyama for just ¥1,000 (it usually costs ¥3,700). The bus journey takes three hours.

The JR Shikoku Pass vs other rail passes

The JR Shikoku Pass has a few advantages over the classic, countrywide Japan Rail Pass: it covers a little more (some private rail lines and the ferry to Shodōshima), but most importantly it is cheaper.

Interestingly, several JR West regional passes cover train travel between Okayama and Takamatsu (on Shikoku). So if you just want to dip your toes in Shikoku, by visiting Takamatsu, one of these passes might be better for you. Or consider stacking one of those passes with the JR Shikoku Pass or the Kagawa Mini Rail and Ferry Pass.

Where can I buy the JR Shikoku Pass?

Like many other regional rail passes, the JR Shikoku Pass can be purchased in Japan or overseas. Purchasing overseas, which you can do online, gets you a slightly better price. You’ll get an “exchange order” which you can swap for the pass once when in Japan.

In Japan, the pass can be purchased at select JR train stations and Warp branches. These are the same locations where you can pick up your pass if you’ve purchased an exchange order.

Warp is JR Shikoku’s in-house travel agency; branches should be inside, or just outside, the train stations.

Note that the JR Shikoku Pass cannot be purchased at KIX! The Warp Umeda branch is the ONLY place you can purchase the pass outside of Shikoku.

For a limited-time only, JR Shikoku is offering a special 3-day rail pass for foreign residents. Through September 2022, all foreign passport holders on any visa are eligible to purchase this pass. It costs ¥11,000, which is sadly equivalent to the cost of the 5-day pass for tourists.

Coverage is also a little different. Most notable, this pass does not cover the ferry to Shodōshima (or the buses on Shodōshima), or most private railways. It does, however, include two bus routes not covered by the main JR Shikoku Pass.

Pass holders can ride the following:

This pass must be purchased online. You cannot purchase it over the counter at train stations in Japan.

JR Shikoku’s regional Kagawa Mini Rail and Ferry Pass covers travel around Kagawa prefecture, including travel between Takamatsu and Kotohira; the ferry between Takamatsu and Shodōshima; and buses on Shodōshima (but not any other buses). It costs ¥4,000 (half-price for children 6–11) and is good for two consecutive days of travel.

Like the JR Shikoku Pass, only foreign travelers on a temporary (tourist) visa are eligible to purchase the pass. It can be purchased online or at the Warp Takamatsu branch (or Takamatsu Station). The price is the same.

Does the JR Shikoku Pass cover the Shinkansen?

No. There are no Shinkansen on Shikoku. The fastest trains on Shikoku are limited express trains, which the pass does cover (non-reserved seats only).

Can I use the JR Shikoku passes to travel from Osaka?

The short answer is no. You can, however, stack this pass with, say, the JR West Kansai WIDE Area Pass and pay the fare for the 20-minute journey between Okayama and Kojima.

While we do our best to ensure it’s correct, information is subject to change. Additional research and reporting by Heidi Sarol.